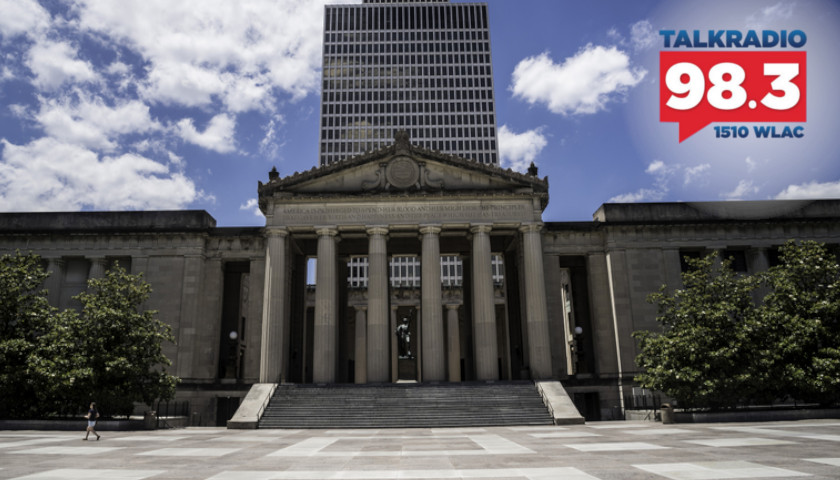 Live from Music Row Thursday morning on The Tennessee Star Report with Michael Patrick Leahy – broadcast on Nashville’s Talk Radio 98.3 and 1510 WLAC weekdays from 5:00 a.m. to 8:00 a.m. – host Leahy welcomed former Speaker of the Tennessee House Beth Harwell to the studio to discuss her successful campaigns, losses, and the winding road to Speakership.

Leahy: We are with our good friend, the former state of Tennessee Speaker of the House, Beth Harwell. You know, I didn’t quite realize how long your career was there. 30 years. That’s pretty long.

Harwell: It is. And as we mentioned, one of the things wonderful about our state governments is a part-time legislature.

So nobody makes a living doing it. You do it as a part-time. And I think that’s a wonderful thing.

Leahy: It’s great because it keeps the state legislators connected. One of the things that I’ve noticed, there’s a correlation between the states in which being a state legislator is a full-time job and budget deficits.

Leahy: You’re smiling like, yes, I see that this is obvious.

Harwell: And one of the things I used to tell my members all the time, is the best government is the one that lives within its means. And so we balance our budget every year. And that’s a wonderful thing.

Leahy: Your family’s here. Your husband’s in business?

Harwell: Yes. He is a business owner here in town. And then I have three children, all grown. My last one is a senior in college this year.

Leahy: Now, what kind of business is your husband in?

Harwell: He’s in the toy industry. He produces and manufactures toys.

Leahy: So he’s got a real job.

Harwell: He’s got a real job.

Leahy: And a small business.

Harwell: And a small business. He used to tell me if I ever voted against anything that helps small businesses I couldn’t come home. So he’s a strong advocate for the entrepreneurial spirit.

Leahy: Has the entrepreneurial spirit of small businesses been crushed of late by the increasing amount of federal and state regulations on businesses of all sizes?

Harwell: Without a doubt. We saw that happening during COVID, these businesses were devastated by all of this regulation.

And it’s going to be a hard, hard comeback for a lot of them. But beyond that, anytime we can free up, people have a misconception that government creates jobs. That’s not true.

The entrepreneurs, those small business owners are the ones that create jobs in America. And if we want to get our country back on track, we’re going to have to do everything we can to make it compatible to be a business owner in the United States.

Leahy: How much did you lose by?

Harwell: It’s one of those times where you really worry about voter integrity because it was a close election.

Leahy: It was that close?

Harwell: So, you know, every time you run into somebody who just said, oh, I meant to go vote. But then you feel like going for their throats because every vote does count.

Leahy: And you just smile and say, well next time.

Leahy: (Buzzer sound) You should have voted for me. What did you learn – when you lost – that helped you win in 1990 for the state House seat here in Nashville?

Harwell: I think the difference was organization, but also being very committed and involved in my community. I’ve gone to school here, but I got more involved with different groups and organizations.

And I think that I’m connected to the community even better because people want to vote for somebody who has lived here for a while and understands their needs and understands what they care about for their children. And that gave me an opportunity to do that.

Leahy: How much did you win by when you won?

Harwell: Over a thousand I think. So it worked. It worked.

Leahy: And pretty much every time since then you were considered a pretty safe seat.

Harwell: Yeah. I have an area of Nashville that is changing quite a bit. Or did. I’m no longer in this district but it’s their district and it’s changing a little bit.

And when I left, it was possible for a Democrat to take my seat. And in fact, that’s what happened.

Leahy: Yeah. They won, not by a lot, but they won. And they had a lot of money and high name recognition.

Leahy: Super minority. And you are a woman, right? What was that like?

Harwell: Not only was I a Republican, which put me in the minority, but I was a Republican from Middle Tennessee, which was almost unheard of at that time.

All of Rutherford County was Democrat, Sumner County, Democrat. So it was very odd to have a Republican from a Democratic area.

So I wasn’t even an East Tennessee Republican. So I was the bottom of the barrel. But I was able to work closely with my colleagues and develop a good relationship with them.

Leahy: So there you were, a first-termer in a super minority and it was not exactly a friendly environment for you. Was Jimmy Naifeh the speaker? Who was the speaker at that time?

Harwell: I think Ed Murray, and then Jimmy Naifeh came in next.

Leahy: Now you got to tell us some Jimmy Naifeh stories (Harwell laughs) because there are styles of being a Speaker. And there’s the old-style Tammany Hall boss-type guy. I think that was more Jimmy Naifeh’s style. Am I right in that?

Harwell: He ran the place with a pretty tight fist, there’s no doubt about it. And in fact, when I was elected speaker, someone gave me a little bracelet.

One of my colleagues did and it said, WWJD. And I said – I looked at the person, I was kind of surprised – I said, well, thank you so much, and, I didn’t realize that you were a follower of Jesus.

That’s wonderful. Thank you. I’ll wear this. He said, no, no, no, that’s not what it stands for. What would Jimmy do?

Harwell: What would Jimmy do. (Laughter)

Leahy: Well, do you have any colorful Jimmy Naifeh stories that you can share with us because he was the powerful, tough leader Democrat when they had a big majority, and he wanted it his way. And if you didn’t follow his way, you were out in the gall, right?

Harwell: Yeah, he did do that. He controlled his committee chairmanship pretty well. I remember the income tax was a big debate because he really pushed to get that through.

He was the one who held the board open trying to convince people at the last minute to vote that way. But I think one of my favorite stories and I’ve told him this.

When I was state Republican Party Chairman, which I was four years, that’s when we took the Senate for the first time. And we sent out brochures all the time. That was back in the days when everyone got their mail and they opened up the brochure.

And Jimmy called me into his office one day and he said, Beth, I do believe there are more pictures of me in the Republican brochures than there is anyone else because we used them as a means to take control. But anyway, he had a lot of good qualities as well.

Leahy: He’s still with us.

Leahy: But not politically active.

Harwell: Not to my knowledge.

Leahy: Well, it’s hard once you’ve been the boss to be a soldier, right? And he was the boss. Ironfisted, no question about that.

What did you learn as a member of a super minority, a freshman, and a younger member of the Tennessee General Assembly that helped you move up and become speaker?

Harwell: Well, one, I was Republican Party Chairman so I helped a lot of the members down there get elected. They don’t forget that when you’re there for them, they try to be there for you as well.

And the second thing I think is that I really chose to become a Republican. When I was in college and when I began as a professor, I sat down and read the platform of the Democrat Party and the Republican Party and I thought, I’m a Republican.

I knew it because I read what they stood for. And so what I wanted to make clear to the members as we’ve made that transition from being just the minority party to being the governing party of the state is that we don’t forget what has brought us to this point.

What are the basic principles that we can’t let go of? Limited government? A government that is closest to the people is the best.

I mean, those basic core things, what made the Republican Party strong in this state and it’s the only way it’s going to remain strong now.

Leahy: Now, the big income tax fight 1999, 2002. Governor Sundquist kind of went back on his pledge of no taxes. This was the famous horn honking period of time where you stopped the state income tax. You and the killer B’s. Diane Black, Marsha Blackburn, and Martha May Beavers.

Leahy: They stopped it, as did a talk show radio host here.

Harwell: Absolutely. That was a huge part of it.

Harwell: That was a very tough time. We were strapped for money at that point. The state is doing very, very well now. My word of caution for our state now is not to expand its budget because it fluctuates, especially when you rely strongly on a sales tax.

You’ve got to prepare for the bad times because they’ll come. The economy kind of goes up and down. So we really had to sit at the table and work out a strategy to balance our budget. And we did so without a tax.