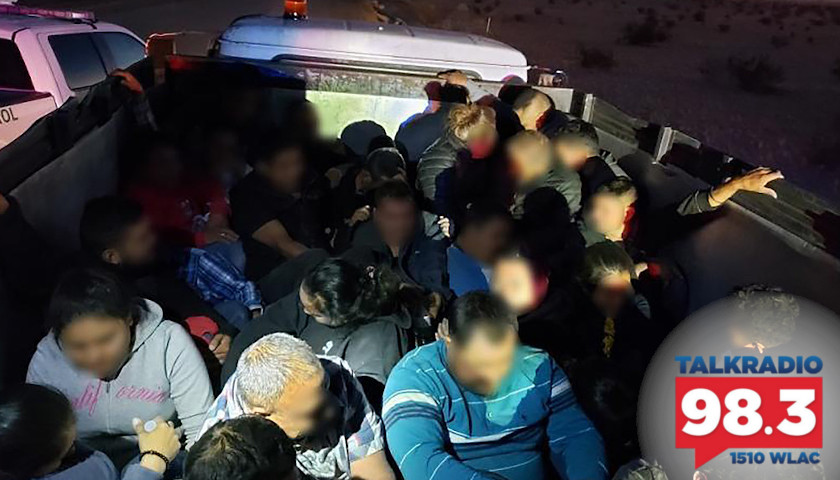 Live from Music Row Tuesday morning on The Tennessee Star Report with Michael Patrick Leahy – broadcast on Nashville’s Talk Radio 98.3 and 1510 WLAC weekdays from 5:00 a.m. to 8:00 a.m. – host Leahy welcomed author and former acting director of ICE Tom Homan to the newsmakers line to discuss the motives of the Biden administration’s lack of law enforcement at the southern border and pending lawsuits.

Leahy: We are joined on our newsmakers line by our good friend, former acting director of ICE under the Trump administration. And like me, a native of upstate New York. The man from Watertown, New York, Tom Homan.

Leahy: Well, Tom, I look at this disaster on the border over the past, what is it now? Almost going on six months. And my question to you is, is what Joe Biden doing, is what the Secretary of Homeland Security, Alejandro Mayorkas is doing, violating the immigration laws of the United States, is that an impeachable offense in your mind?

Homan: I think it is. Their number one responsibility to protect this country and protect your sovereignty. And they have abdicated their responsibilities to secure our border.

They are releasing people at the border without any court date. And now they’re talking about and in the process of reinstating the CAM project, where people can apply for asylum in their home countries, and we will transport them at the taxpayers’ expense in the United States to reunite their families.

It’s at a point where I actually wait for they cannot believe where we’re at as a nation.

Leahy: Tom, what’s the solution to this problem?

Homan: You know, we can’t wait for 2022. I’m involved with several lawsuits. With the state of Texas, they’ve got five separate lawsuits filed against this administration. I’m a party to four of them.

I’ve written more affidavits, against the Biden administration than I’ve written in my entire career against criminals. (Inaudible talk) I’m a part of the Arizona lawsuit.

So I’ve been acting as an expert witness for a lot of the state attorneys general suing the Biden administration before and they’re doing exactly what you said they’re doing.

Not only are they ignoring the law, we believe they’re actually breaking laws. One of the lawsuits clearly says in the statute in Title Eight of the United States immigration law says that ICE shall detain those convicted of certain drug offenses, those who have final orders of removal from an immigration judge, and those who have committed crimes in perpetude.

It says I shall detain these people. They’re not detaining any of them. They’re releasing them. And I’m not blaming the ICE officers.

They’ve been put in a tough decision by this administration. They were given a memo basically saying that you can only use somebody in the United States for being here illegally if they have been convicted of a serious crime.

So for some, it’s almost like being in this country illegally isn’t illegal anymore? And they don’t think that serves as another enticement for cartels.

Look, we’ll get you to the border and we’ll get you in the country, you can even lose your case. And you win because no one’s looking to remove you.

This administration, I said many times, isn’t mismanagement. This is incompetence and by design. This is what the border looks like.

Leahy: I think you are right. I think it is by design. Let’s talk about this character, Alejandro Mayorkas. He seems to be perhaps one of the most practice liars I’ve ever seen.

In other words, he tries to set forward an explanation, couched in legal terms to explain why he’s violating the law. What’s your take on this guy?

Homan: I don’t recognize him anymore. When he was deputy secretary, I was third in command of ICE back in 2014, 2015.

We had a similar surge, not this big, but we had a surge. He knows what causes surges, and he knows how to stop them. I’ve had over 100 meetings with him.

Leahy: You’ve had over 100 meetings with Alejandro Mayorkas?

We tell people long enough to see a judge. And when a judge order to remove which 90 percent would be able to removed, we removed them.

The numbers went down. He’s doing the complete opposite of what he knows works. They are not detaining them and they are working as quickly as they can to release them as fast as they can.

They’re being released without a court date. And we can’t remove them because ICE can’t remove someone for just being here illegally anymore.

He’s done the complete opposite of what we did in ’14, ’15 when he was a Deputy Secretary on how to stop this surge. That’s what I’m saying. This is by design. He knows how to stop this. He just won’t take the steps.

Leahy: Would you say Mayorkas is a highly intelligent man?

Homan: He was a US attorney. He’s an attorney by trade. He’s not a stupid man at all. What he’s doing with these open borders is he sold out to the progressive left, just like Joe Biden did.

Leahy: Now, let me ask you about this. What’s the motive here? In your view? You react to what really is right. You probably don’t look at motive that much.

But I look at this and I say, okay, who’s behind this? Is this Biden’s desire? Is it Mayorkas’s desire? What are they trying to accomplish?

Homan: In my opinion, the open border advocates have control of the White House.

I know for a fact, a lady by the name of Esther Olavarria is working at the White House as a senior policy advisor who is an immigration activist out of Miami.

She and people like her have hijacked this administration. Like I said before, Biden sold himself out to win the progressive left. He knew it was important for him to get the votes from the progressives to become president.

So he sold out just to become president. And I think about this all the time. What could actually benefit? Here is who benefits. All these people come across the border, millions of them are going to sanctuary cities.

What happens then? Well, Biden also overturned the Trump census, which means then I’ll be counting the next census. But what’s that equal?

It equals more seats in the House for the Democrats which leads to the Electoral College. They’re offering amnesty to millions of people.

They think they’re future Democratic voters. This is about Democrats set the stage playing the long game for perpetual power.

And I’ve met with 20 Republican congressmen out in Texas about a month ago, and I told them, you guys need to pull your head out of your butt and pay attention to what’s going on.

Leahy: You didn’t say butt, I’m pretty sure I did.

Homan: No I didn’t. I said, maybe you don’t care, but you won’t win another election in 15 years if you don’t wake up. The Democrats are playing the long game and you’re ignoring it.

Leahy: Yeah, I think that’s it. Let me ask you this. Mayorkas. Now you’ve been in with him. He’s an interesting fellow to me. I think he’s very, very clever, but totally amoral in my view.

Homan: Mainly one on one meetings and many group meetings. And I would tell them how do we ran into this surge in ’14, ’15 and what we need to do to stop it.

And Jeh Johnson listened to us. And they did it. Listen, Jeh Johnson when he was Secretary and Mayorkas was deputy, we built with their approval 3,000 family beds.

You never see them do that today. And the so-called cages and what everybody is screaming about and said that Trump built, no, those were built when Alexander Mayorkas was Deputy Secretary.

That’s why I’m saying he’s doing the complete opposite of what he knows works. This isn’t an accident. He is not the same man he was back then.

They just keep making things easier. They stood out on the national stage a month ago saying, hey, look, there is no overcrowding border trouble cities.

We’re processing these quick kids quickly and getting them out. That’s a success. You may call it a success, but I call it a failure.

Because the quicker you release people and brag about it, the more they’re going to come because they know they won’t be detained.

Leahy: Yeah, that’s my sense. You were an acting director of ICE for a period of time. What’s morale in ICE like?

At the same time, we have a record number of people coming to that border and entering illegally. The lowest number of arrests.

They’re not allowed to do their job. And I said before, and I mean, this is I can put in one sentence. An immigration agent or a law enforcement officer can no longer arrest somebody from being in the country illegally.

An illegal alien gang member can walk up to an ICE agent today and say, I’m here illegally. I was ordered to be removed by an immigration judge last year.

I didn’t go. What are you going to do about it? The answer is, they can’t do a thing about it. They can’t arrest them. This is where we’re at as a nation.