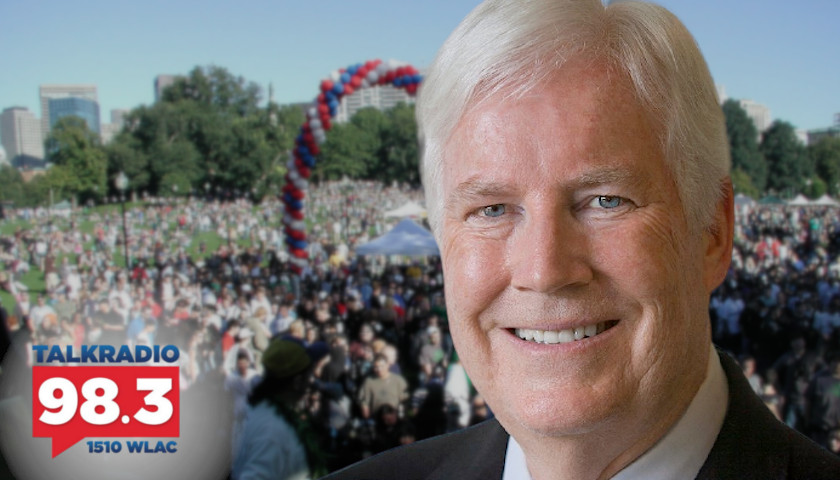 Live from Music Row Thursday morning on The Tennessee Star Report with Michael Patrick Leahy – broadcast on Nashville’s Talk Radio 98.3 and 1510 WLAC weekdays from 5:00 a.m. to 8:00 a.m. –  host Leahy welcomed creator of the Huey Report and direct mail expert, Craig Huey, in-studio to talk about his trip to South Dakota for the Freedom Fest event.

Leahy: We welcome back to our microphones our favorite California refugee that’s come in the past couple of years, Craig Huey, the digital marketing wizard. Welcome, Craig. Have we missed you!

Huey: Michael, it’s great to be back. And I’m excited about this morning.

Huey: Awesome. Just what I needed this morning.

Leahy: Just what I needed. Hot coffee brewed especially for you Craig.

Leahy: I brew coffee for all my friends. Now that we’ve got the big capital investment of the coffee maker right now that people are sending them in. And by the way, if you’re there in the morning and you wake up, as I said, I wasn’t really awake in the five o’clock hour, I may have sounded like it, but I needed this coffee.

And part of my routine, literally the routine of making the coffee, those few steps – pouring the water, measuring out the teaspoons – all that actually, that repetitive process every day, kind of wakes me up a little bit. That part. (Huey chuckles) And I think people in our listening audience are probably doing that.

Huey: Here’s one thing I should say about this coffee. As a California refugee, I love experimenting and tasting things made in Tennessee.

Leahy: Well, this is from – roasted in Cookeville, Tennessee by BROASTTN. Broasttn.com. It’s called TriStar Trio. Rich and smooth, low in acidity, and full-bodied. This unique three-bean blend from Brazil, Guatemala, and Ethiopia is a nod to the three distinct regions that make up the great state of Tennessee.

Leahy: Oh, there you go. Yeah, you like that? I like that you are a man who understands good copy. Copy. Those are words written to persuade people to buy your products.

Leahy: Well, I got to catch up with you because you texted me this image of you on a stage with Larry Elder.

Huey: That’s right. Who it looks like has a decent shot at becoming the next governor of California.

Huey: It’s pretty amazing. Yes. I was at a conference, Michael, called Freedom Fest. Usually, it’s held in Nevada. It has about 1,500 people. It was held in the free state of South Dakota.

Leahy: The free State of South Dakota – in which city was it held?

Huey: Yes. So my wife and I got to see Mount Rushmore and the Badlands.

Leahy: How do you travel to Rapid City, South Dakota?

Huey: Well, my wife and I were going to drive. We decided to fly to Colorado and then fly to Rapid City.

Leahy: There are airports in Rapid City?

Leahy: (Laughs) Whoa, man. Now, Rapid City, South Dakota. I think a friend, Tomi Lahren, is from there. I think Tomi’s from Rapid City. How far is that from Mount Rushmore?

Leahy: I’m pretty sure Tomi Lahren – is the Fox News contributor and an occasional guest here – is from Rapid City. So you fly from Denver to Rapid City?

Huey: Yes. There are 250 speakers, including the governor of South Dakota.

Leahy: Kristi Noem. Did you hang out with her?

Huey: I didn’t hang out. But boy, did she command the crowd.

Huey: Steve Moore, the economist, was there. Lots of investment newsletter writers, and it was really a great conference. And probably one of the highlights is I was on stage with Larry.

Leahy: You were on a panel? Now, what was the name of the panel?

Huey: It was on voter fraud.

Huey: This was after he had just found out that he was able to be legally on the ballot.

Leahy: After he won the victory in court.

Leahy: He must have been pretty happy.

Leahy: Isn’t he in the lead in the polls?

Huey: Oh, he is definitely.

Leahy: What’s the most recent poll that you’ve seen?

Huey: So there’s a couple of polls that are out, and they’re from the LA Times-Berkeley, which is usually liberal. And what it’s showing is that Caitlyn Jenner, who everybody thought would be the superstar, is about four percent.

Leahy: Let me just say, in the world of politics, if you’re running for an office and you’re at percent, it’s not a good thing.

Huey: It’s not a good thing at all. The other candidate that is at a high level is a guy named John Cox who ran for governor before and failed. And he put in $5 million of his own money so far.

Leahy: And John Cox, by the way, has the worst branding of any candidate I’ve ever seen.

Leahy: He’s walking around, like, in a big bear suit or something?

Huey: Well, he’s got a bear with him.

Leahy: Same difference. Because if I’m in California, I want a guy who’s got a big bear walking around with him.