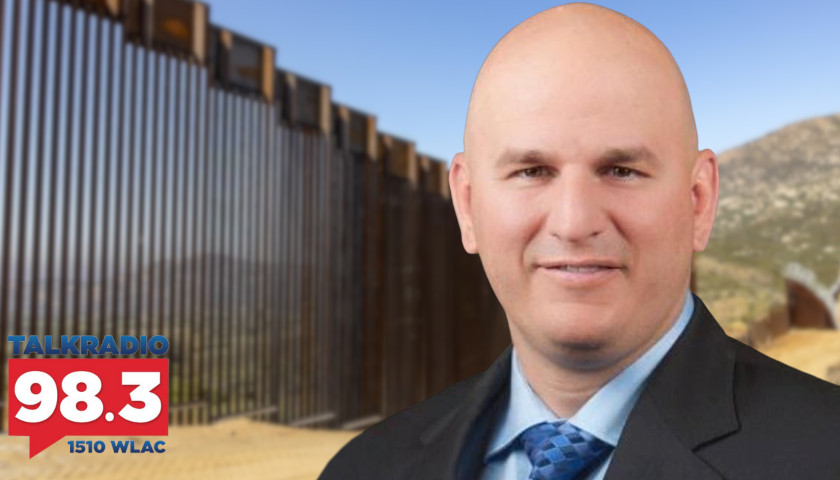 Leahy: We are delighted to have on our newsmaker line, Brandon Judd, the President of the National Border Patrol Council which represents all of the folks that are there and our Border Patrol agents on the border. Welcome, Brandon. Thanks for joining us.

Judd: Always good to be with you. Thank you.

Leahy: Well, I know you’re just waiting breathlessly for Vice President Kamala Harris to go down to the border and take a look at this. It’s been how many days? It’s been 80 days now since she’s been charged with doing this by the President and have you seen her yet?

Leahy: How do your members look at this kind of silliness from the Biden Harris administration? This kind of disdain for the job you do. How do you do your job every day in that environment?

Judd: It becomes very difficult. every time we put on a uniform and we go out and we try to do our job we know that we just don’t have an administration behind us that cares about the American public and that cares that we’re able to secure the border.

Vice President Harris, the other day, said that she’s an advocate for illegal aliens. She’s advocating for lawlessness. How can you put on a uniform and go out to try to do the job when you know that the administration is actively trying to support those people that you’re trying to keep out of the country to protect the American citizen?

Leahy: That’s a very interesting point. It’s almost like Alison in Wonderland kind of stuff, right? This is like the counter to logic, counter to what they’re supposed to be doing. To me, I don’t know.

I hear the Vice President say something like that and I think is this person trying to subvert the immigration laws of the United States?

Judd: It certainly looks that way when you consider that in the first five months of this administration, nearly 500,000 illegal immigrants have been allowed to get into the United States.

And then on top of that, nearly 300,000 people have been released under the catch and release program. That’s 500,000 people in five months that have been added to the 11,000,000 illegal alien population that’s already here in the United States. That’s crazy! In five months, think about what’s going to happen over four years.

Judd: As a federal employee, I can’t comment on that. I just can’t go there. But what I can tell you is that the immigration laws just are not being enforced the way Congress intended them to be enforced.

And when you consider that both Vice President Harris and President Biden, were both in Congress and they both helped pass the laws that we’re currently supposed to enforce it’s insane to think that they’re using what’s called prosecutorial discretion to create the current disaster that we have on the border.

When you consider that they’ve said that ICE can only arrest and deport people that have committed serious felonies, they’ve basically made every single city in the United States a sanctuary city.

If a local police department pulls somebody over for drunk driving and they’re in the United States illegally, and they call ICE, well, drunk driving isn’t one of those crimes that ICE can then go take them into custody, then they’re going to then have to release them.

That’s an illegal alien that we knew was in the country that ICE can’t go pick up. In essence, we’ve created sanctuary cities throughout the entire United States through what’s called prosecutorial discretion.

Leahy: So where does our country go on these issues?

We elect people to look out for our interests, not the interests of people that are not here in this country or aren’t citizens of this country.

Leahy: Governor Greg Abbott of Texas announced over the weekend his intent to build a wall and have the state build a wall and to arrest any illegal aliens that they find. What do you make of that?

Judd: I’m grateful that we have governors that are willing to step up. We have to look at what’s been going on when border patrol’s resources are being pulled out of the field because we’re being overwhelmed by what we call getaways, those people that cross the border and basically wave their hands in the air, say, here I am, I’m going to claim asylum.

What happens is we pull so much of our resources out of the field to process those individuals that we create these artificial gaps that criminal cartels can then cross their higher-value products.

Whether that’s drugs, whether that’s criminal aliens, whether that’s aliens from special interest countries, it creates these gaps. Governor Abbott has sent DPS down to the border to help fill those gaps, and they’ve done a phenomenal job.

So he’s just looking at more solutions to try to get this crisis under control there in Texas. I wish other governors would step up to the plate and do the same thing that he’s doing.

Leahy: You anticipated my next question when you say, other governors. There are four states that border the Mexican border, going East to West. Texas, New Mexico, Arizona, and California.

Greg Abbott is a Republican. I think the New Mexico governor is a Democrat. Arizona Governor Doug Ducey, Republican. California Governor Gavin Newsom, a Democrat. Compare and contrast, those four governors and their policies towards the border.

Judd: So the two Arizona governors, Governor Ducey in Arizona, that’s my home state. And then, of course, Governor Abbott in Texas, they’ve both been willing to acknowledge that this is, in fact, a crisis.

They’ve both been out there saying this is a complete and total disaster. This is a man-made disaster. This could have been controlled, but this administration came in and reversed several policies that were working programs that got the border under control.

And they’ve done more obviously, than the Democrats governors in New Mexico and California. Governor Abbott has done more than Ducey. But Ducey has the resources that he has. He’s called up the Arizona National Guard.

Leahy: And again, how many members are in the National Border Patrol Council?

That’s kind of where they got started. And that was his background. And I’m telling you, he felt that this was a very, very difficult job. He retired about five years ago. So has a job gotten better or worse in the past five years or particularly the past five months? Let’s go with that.

Judd: It’s more difficult when you have a President that supports you. Under the Trump administration, the job was more difficult, but it was more fulfilling because we knew that we were doing a good job.

Tune in weekdays from 5:00 – 8:00 am to the Tennessee Star Report with Michael Patrick Leahy on Talk Radio 98.3 FM WLAC 1510. Listen online at iHeart Radio.
Photo “Brandon Judd” by Fox News.