Ben Cunningham on Marxism: ‘One of the Most Treacherous and Murderous Ideologies Ever to Come Along’ 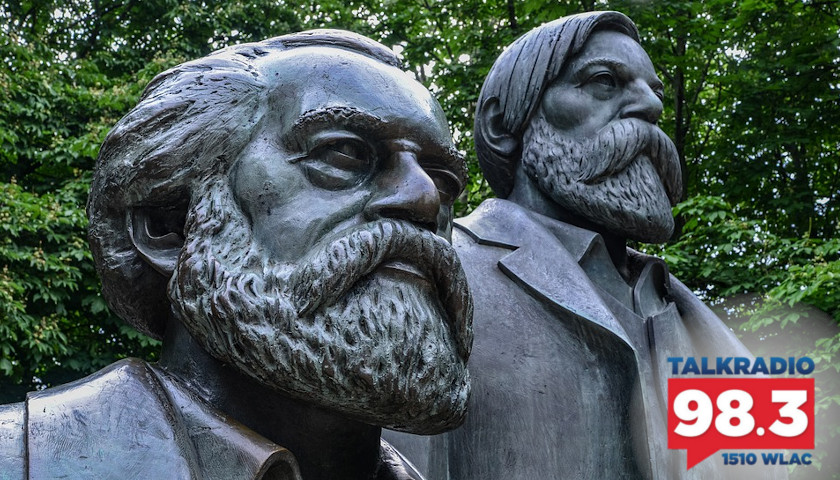 Live from Music Row Tuesday morning on The Tennessee Star Report with Michael Patrick Leahy – broadcast on Nashville’s Talk Radio 98.3 and 1510 WLAC weekdays from 5:00 a.m. to 8:00 a.m. – guest host Ben Cunningham contemplates the results of the Marxist ideology and the effect upon young generations who don’t understand the consequences in the pursuit of their natural need of purpose.

Cunningham: I’m with the Nashville Tea Party. You can find us at nashvilleteaparty.com. And at Facebook. We hope we are still on Facebook. They take us off from time to time when we do naughty things. They did throw us off LinkedIn completely. We’ve just got back on LinkedIn, so hopefully, we’ll stay in their good graces for a little bit.

Henry: Who did you have to pay to get back on that one?

Cunningham: Yeah, (Chuckles) we may have to at some point. Free speech may have a monetary price. Grant, Henry, in this morning, we are co-hosting and trying to fill the big shoes of Michael Patrick Leahy, who’s away on vacation. But my goodness, the threats to the American experiment and what we think of are all these foundational documents, foundational ideals are. I know we say this a lot. This time in this place, we have more threats to the American experiment than we’ve had in a long time.

Henry: It really is.

Cunnigham: We have this critical mass of people in academia who believe in some form of Marxism, and that’s what we were talking about earlier. And it’s just depressing and pathetic that this great country where people can come and be anything they want to be.

And you pull a ship up to any port across the world and say, we’re going to take you to America. You fill up that ship in 10 minutes. And it is a beacon of hope. And yet we’ve got this toxic, toxic Marxism and all its varieties.

Henry: My wife’s family rather fled communism from Armenia.

Cunningham: And in so many ways they don’t teach that in the schools. And that’s what’s depressing. And then we have this Critical Race Theory coming along now is in fact just very thinly veiled Marxism trying to divide us up into virtuous victims and evil oppressors.

Deroy Murdock, one of the great Black conservatives wrote a great article in The Daily Signal. And I just want to quote this because it just encapsulates it so beautifully. Critical Race Theory may be the Democrat left’s filthiest ugliest big lie.

It defines America as inherently and irredeemably bigoted denounces all whites as racial oppressors and diminishes all Blacks as racially oppressed victims. Lies, lies, lies. The third lie is the worst.

The Democrat left replies, no, you can’t. And that really is the essence of Critical Race Theory again dividing us up instead of what Marx said, the proletariat and the bourgeois. This divides up by race and says, if you’re white you’re an evil oppressor.

And if you’re Black, you are a victim. And it just is absolutely antithetical to everything, and it will ruin this country if we allow it to. And you were talking earlier about all of these utopian visions couched in good intentions and that so many young people love that they love being identified, and it gives their lives some meaningful purpose.

Cunningham: Marxism is an awful way of governing, but it’s a hell of a way of selling an ideology. I mean, Marx, he personally was just a wreck of a human being. He didn’t even attend his own wife’s funeral.

And he was just an awful person. He basically was a kept person. He had other people that supplied his income. Probably the reason he came up with this idea that the state can provide for you.

He actually traveled. Not us dung he thought owned the moon. And he traveled to China before he came into power with the Khmer Rouge. And they were just in power for four years and killed 2 million people.

A quarter of the population of Cambodia destroyed them. And some journalists found him out in his jungle hideaway after he had been run out of town, basically. And they asked him, they said, your government has killed a bunch of people.

What do you have to say to this? Pol Pot still said this. He said he was asked by journalists to comment on reports of mass killings during his period of power. Pol Pot replied, “Our policy was to provide an affluent life for the people.”

Cunningham: His motivation in terms of his good intentions after he killed 2 million people. And it’s just mind-boggling. And it is so instructive with all this utopian thinking by these young folks.

They never think about what the results are. They think about the moment and identifying with something that’s noble and worthy. It is one of the most treacherous and murderous ideologies ever to come along.

Henry: The ideology to itself become so pervasive as you’re seeing now, whether it be through Critical Race Theory infecting all the way through primary education, or whether it be something at the university level or even with our careers right now.

I think if you’re still asking yourself, what is the allure? How are so many people drawn to this? Look at what Victor Frankel said. So we’re talking about motivating human beings. Adler said You motivate a human being through their desire for power. Maybe.

Jung said you motivate a human being through their desire for pleasure. Well, that’s just Hedonism. And we’ve tried that before. Victor Frankel was a philosopher who was a member as a Jewish individual in the Holocaust.

He didn’t have an opportunity to do either power or pleasure, clearly. So he distilled his worldview down to you really motivate a human being through their desire for purpose.

That’s why they feel like they have a purpose in this fight. But I’m telling you one more time then and right now, I truly believe conservatism has that real motivating purpose behind it. That’s what we need to get back to.

Cunningham: Absolutely. And we need to be unapologetic and courageous in stating it.