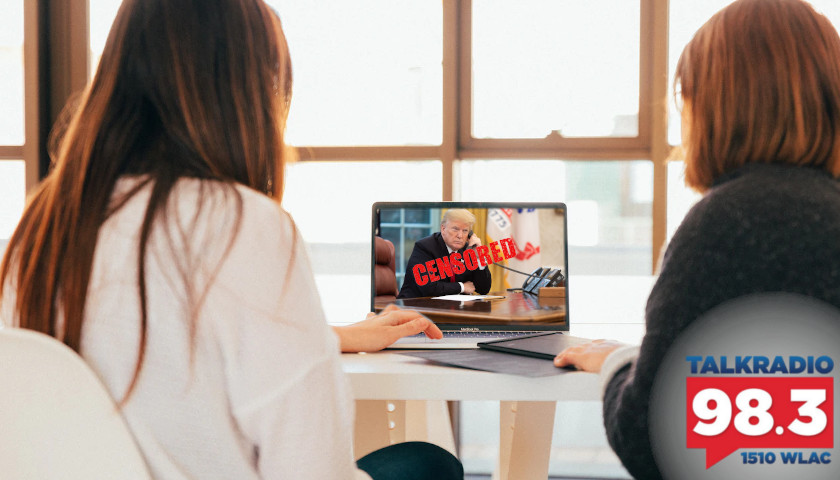 Live from Music Row Tuesday morning on The Tennessee Star Report with Michael Patrick Leahy – broadcast on Nashville’s Talk Radio 98.3 and 1510 WLAC weekdays from 5:00 a.m. to 8:00 a.m. –  host Leahy welcomed Mayor Andy Ogles and Grassroots Engagement Director for AFP Grant Henry in studio to weigh in on Big Tech’s censorship and whether or not they should be considered a public utility.

Leahy: We’re just having too much fun here in studio. Grant Henry, the grassroots director of Americans for Prosperity of Tennessee, and Andy Ogles, mayor of Maury County, that bastion of economic freedom and the turbocharged engine of economic growth. I had to get that in again, Andy. (Chuckles)

Leahy: Can’t say it enough, can we? We’re just having a lot of fun here. Grant, I’ve got a story here about Big Tech bullies. It’s got a local angle.

Our very good friend and all-star panelist Carol Swain. We have a story about her written by Chris Butler. I’ll read the story and then, Grant, I’d like to get your reaction to this.

Shadow banning occurs when someone posts something that the same person can see what he or she published on a social media network.

No other person ever can see or respond to the post. Swain said she saw her published post and asked her friends if they also saw the post.

They did not. Swain, a public figure who ran for mayor, frequently appears on Fox News, and she’s been an all-star panelist here for some time – good friend.

The shadow banning persisted for about seven days. Swain said, “Clearly, they are doing something to suppress the reach of Conservatives and I am on their radar screen right now, I would say. And for me, I think it has to do with my visibility around Critical Race Theory.”

Henry: You know that there’s a change in the political wins when Justice Clarence Thomas is coming out with new coined opinions that are starting to lean in a different direction. Here’s the headline actually I’m reading, “Spurred by Clarence Thomas, Ohio AG Wants Google Declared a Public Utility.”

I’m not kidding. Just last month, the state of Ohio sued Google in an unusual complaint that seeks a legal declaration that Google is a common carrier and a public utility into Ohio law.

You understand what they’re going for here? Obviously. Right now, here’s my thing that, Michael, it’s going to be a little bit out of left field, maybe something that’s controversial in the room that we’re sitting in now.

The super uber limited government side of me wants to say, look, man, if Facebook wants to create a terrible product and run that product on the ground, by all means, do so.

And if you’re keeping elected officials off the platform, then clearly it’s something in the realm of let’s say, not just a public utility, but an arena by which we have this conversation.

Again, let me make a call to my conservative brethren, though. If we truly believe in this limited government philosophy and letting businesses do is they want to, stop using the product!

And I know that’s the thing that we can’t exactly get our heads around right now, but I would make the effort. There’s a clear, overt, unadulterated bias on behalf of all these social media companies.

Stop using their product! Stop giving them your money. Stop promoting them. They’re just going to keep doing what they’re doing unless we answer with our dollars, unless we answer by moving to something else.

Unless some benevolent billionaire gives us a different option, we can’t keep playing their games.

And not just Facebook, it’s Twitter and it’s all of them. They’re working in a cohesive unit together.

Leahy: Andy, our free-market guy here, Grant Henry, says he agrees with Justice Thomas that Google should be regulated as a utility. Do I have you right on that, Grant?

Henry: I respect the man so much, but I’m also a free-market guy.

Leahy: So you’re uncertain. You’re conflicted. Are you conflicted on this, Andy?

Ogles: If you go back to January of this year, I wrote a letter to the governor and to the Speaker of the House, and the Lieutenant Governor, asking them to follow Florida’s lead.

I’m a fellow with Club for Growth. Club for Growth is a conservative organization. And one of my colleagues, who is also a fellow down in Florida, who is a state legislator, wrote a bill that would penalize Facebook and Twitter and such for censoring anyone.

But Conservatives in particular. And so I called on our General Assembly to do the same and I got no response. But now you’re seeing that taking place, of course, in Florida and across the country.

They censored our president. It’s taking place in Tennessee because our governor and General Assembly did not take action.

And I would agree. So there’s a point at which I’m a free-market guy, for sure, but when you have a business get so large that they then control all the entry points into a marketplace, that changes that conversation somewhat.

And so how do you manage that? Part of it is you could have governors stepping in and pushing back against this censorship.

And then also, all of your states are institutional investors. So what does that mean? Tennessee has billions of dollars under management.

It has minimal impact. They really don’t care. Tennessee pulls a billion dollars out of their stocks, they care, and they will change how they do business.

But it’s going to take leadership from not just one state like Florida and Ron DeSantis, oh, by the way, who’s a fantastic governor.

It’s going to take, like, a chorus of governors working together to push back against social media. Otherwise they’re going to steal another election from us. Period.

Leahy: Governor Bill Lee is not singing in harmony with that Conservative chorus it seems to me. A little bit off-key. (Laughs) That’s my view.

Ogles: I was going to say something, and then I just stopped. Because it’s probably better.

Leahy: Grant, you’re dying to say something here, aren’t you?

Leahy: Reveling in the fun we’re having.

Leahy: Let me go personally on the record, and I disagree with Justice Thomas. Probably the first time in a long time. I don’t think it should be regulated as a utility, because then you’ve got the government sanctioning their activities.

I think they should be broken up. I also want to bring to your attention a great article at The Wall Street Journal by a fellow by the name of Vivek Ramaswamy.

He lives in Cincinnati. We’ve tried to get him on the show. He’s like a biotech billionaire and about 35 years old. Very conservative.

Here’s the article: Trump Can Win His Case Against Tech Giants. You know, last Wednesday, President Trump and the America First Institute announced that he’s suing Google, Facebook, Twitter, and their CEOs in a class-action lawsuit.

By the way, I don’t know if I mentioned this to you. Our own Laura Baigert of The Tennessee Star and the Star News Network was there at Bedminster Club of the Trump National Golf Club there and asked one very good question that the former president responded to.

And, oh, by the way, Laura Baigert of The Tennessee Star will be at the rally in Arizona that the former president is holding in Phoenix next week.

And we’ll be reporting live from that. It’s going to be an offering of the Star News Network wire service. So lots of local folks are participating in that.

Here’s what Vivek says: It’s true, the First Amendment ordinarily applies to the government rather than private companies. But the central claims in Mr. Trump’s class-action lawsuit that the defendants, Google, Twitter, Facebook, should be treated as state actors and are bound by the First Amendment when they engage in selective political censorship has precedent to back it up.

Their censorship constitutes state action because the government granted them immunity from legal liability, threatened to punish them if they allowed his favorite speech, and colluded with them in choosing targets for censorship.

Henry: I don’t know, honestly. I’m not sure. And if I’m going to be pushed gun-to-head type thing, I’m probably going to say they may not buy that argument.

They’re probably going to wait and let the legislature move on Section 230 before they jump and preempt or circumvent the legislator.

Leahy: Andy Ogles, mayor of Maury County. Will the federal judiciary take a knee, shall we say, on that issue?

Ogles: I hope not. I think one of the legacies of Donald Trump is the Supreme Court, but also the federal judiciary and the changes in the employment of judges there. And, hopefully, we can bring some common sense into this conversation.