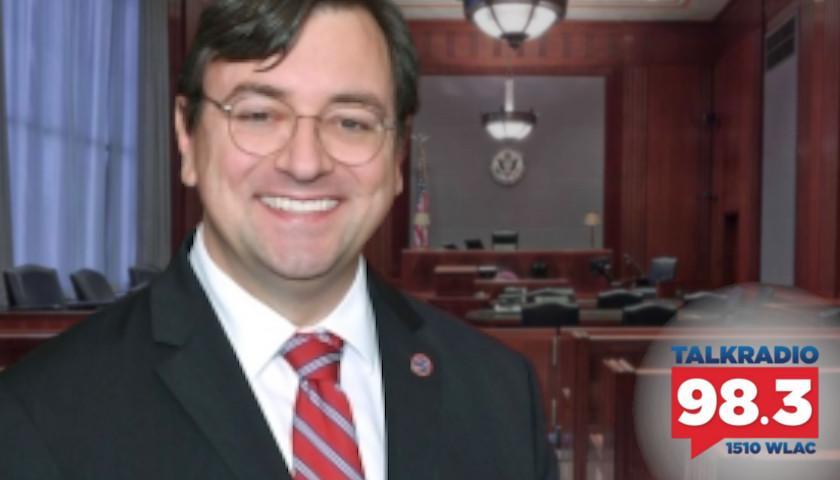 Live from Music Row Thursday morning on The Tennessee Star Report with Michael Patrick Leahy – broadcast on Nashville’s Talk Radio 98.3 and 1510 WLAC weekdays from 5:00 a.m. to 8:00 a.m. – host Leahy welcomed Tennessee Attorney General Jonathan Skrmetti to the newsmaker line to discuss the Taylor Swift Ticketmaster debacle and big settlement for the state from Walmart and Google.

Leahy: In the studio, our good friend Braden Boucek, who is the litigation director for the Southeastern Legal Foundation. And on the newsmaker line right now, in my opinion, the very best state attorney general in the United States, Attorney General for Tennessee, Jonathan Skrmetti. Welcome, General Skrmetti.

Leahy: It’s been a busy week for you. Our lead story at The Tennessee Star right now, “Tennessee Attorney General’s Committee Addresses Ticketmaster Complaints After the Taylor Swift Ticket Debacle.” Tell us about that.

Skrmetti: Sure. So this is a good example of the bread-and-butter consumer protection work that the office does. I love to sue the federal government. We’re going to do a lot more of that.

But we’re also responsible for responding to consumer complaints and making sure that companies are following our basic laws that require essentially good faith and fair dealing. And we’re responsible for enforcing the antitrust laws that say we have to make sure that markets are working.

And this is potentially an example of both. We don’t have any specific allegations against the company yet, but there have been a lot of complaints and a lot of speculation about misconduct.

Leahy: Braden has a question for you.

Boucek: Can I just say, having known you a while, two names I never thought would be in the same sentence would be Attorney General Jonathan Skrmetti and Taylor Swift. (Laughter) Do you find yourself as surprised as I do?

Skrmetti: I said I did not have “lead story on TMZ” on my AG Bingo card when I got this job. (Laughter)

Boucek: I doubt not everybody did.

Leahy: But you’re just beginning an investigation into that. The tickets were a big debacle. She’s very popular, obviously, but a lot of complaints. So where does that investigation go?

Skrmetti: We’ve got a consumer protection division that’s full of really experienced, good, hardworking attorneys, and they’re going to start doing the basic grunt work with discovery, getting documents, looking into exactly what happened, and exactly what representations were made. We’ll do an analysis of the market for concert tickets and see if there might be an antitrust issue there.

And of course, antitrust, there’s a big split right now between the Left and the Right over whether you have to worry about consumer welfare, which is the Robert Bork approach that has been the law for a long time, or whether you just care about a company being big. Any antitrust we do is going to be squarely rooted in the consumer welfare standard.

Leahy: Interesting. So we’ll see. How long will that take to play out, you think?

Skrmetti: It’s going to be a long time. It could take awhile.

Skrmetti: They should reach out to the Division of Consumer Affairs. And I’m embarrassed to say – and forgive me, I’m still new – I don’t have that contact information handy.

If you Google “Tennessee Division of Consumer Affairs,” there will be an intake form that you can fill out to provide that information.

Leahy: Very good. Well, it’s been a busy week for you. A couple of settlements were announced. Let’s start with the Walmart opiate issue settlement. Describe that for us and how is that going to be implemented.

Skrmetti: Sure. We’ve been going through a lot of companies involved in the opioid epidemic. We started out with the distributors. Now we’re working on the big pharmacies. And Walmart has reached a settlement.

They have agreed to implement a lot of very good controls. And, in fact, they’d already done a lot of that, even in the course of preparing for this settlement of making sure that their company is not involved in any sort of illegal or illegitimate opioid distribution.

And they’re also paying a substantial amount of money. And Tennessee is going to receive a good portion of that, which is going to go into our opioid abatement trust fund to be used for the purpose of fighting back against the opioid epidemic through things like education, health care, and enforcement.

Leahy: You also have a deal, cut a deal with Google, and there’s a settlement there. Tell us about that.

And Google was not being transparent, so as a result, we were able to obtain some money. There’s about $14 million coming to Tennessee out of about a $400 million total settlement. But as we all know, that’s not going to change Google’s behavior.

They have near-infinite money relative to everybody else. The important thing is the injunctive relief. And this is another step in ensuring that there is transparency for data collection and that people’s privacy is not just being arbitrarily violated for profit.

It’s part of a very large, very intertwined effort to rein in the power of Big Tech and make sure that people’s rights are not infringed by it.

Boucek: General, what do they admit that they were doing with the data?

Skrmetti: They were using the data to identify people’s location, and that allowed them to sell more granular, more accurate information to advertisers. And there’s nothing wrong with trying to provide a high-quality product, but you’ve got to be transparent about it.

And their data collection mechanisms were intentionally obfuscated in ways that didn’t let people know exactly how detailed the tracking was.

Leahy: That sounds like a pretty busy week. You’ve been attorney general in Tennessee for now, two and a half months. You started the job on September 1st. It’s an eight-year term.

You’re selected by the Supreme Court here in Tennessee. Has anything surprised you in these two and a half months about the job?

Skrmetti: There are loads of surprises; how busy it’s been: I feel like I got shot out of a cannon at the beginning of it, and I keep waiting for things to slow down. I’m hoping for the holidays, at least – there’s a little bit of a slowdown. But, I mean, I didn’t take this job to be bored.

I took it to do a lot of good work on behalf of Tennessee. And so it’s been exciting, the opportunities that are here. We’ve had a little bit of turnover in the office and a little reshuffling, and I’ve got a great team.

I’m very excited to work with the people I get to work with every day, and it’s a target-rich environment between the federal government and Big Tech. So we’re just gearing up for a lot of interesting cases to come.