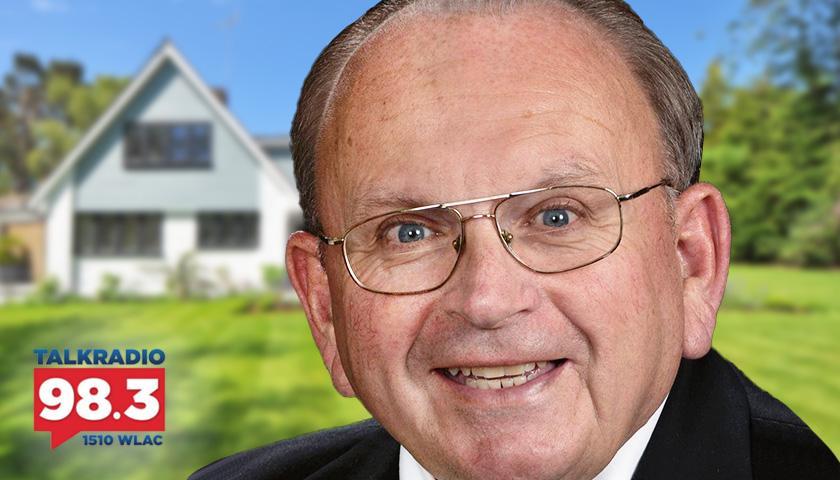 Live from Music Row, Tuesday morning on The Tennessee Star Report with Michael Patrick Leahy – broadcast on Nashville’s Talk Radio 98.3 and 1510 WLAC weekdays from 5:00 a.m. to 8:00 a.m. – host Leahy welcomed newly crowned Southern Middle Tennessee Realtor of the Year, Jimmy Campbell of Crye-Leike Realty in Columbia, Tennessee to the newsmaker line to talk about the real estate market, his father, and growing up in Maury County.

Leahy: We welcome to our microphones right now, the Southern Middle Tennessee Realtor of the Year, Jimmy Campbell from Columbia. Good morning, Jimmy.

Leahy: Congratulations on being named Realtor of the Year. But hey, it’s only November. Do the realtors have a short year? How does that award work?

Campbell: Of course, they elect their officers and directors for next year. Towards the end of this year, we are just six weeks off from the end of the year and getting everything ready to take off again. Really it’s based on about the same time every year.

Leahy: About the same time. Is this based on how many sales you make? Are you like the biggest seller, or what’s it based on?

Campbell: No, not money or sales at all. It’s based on realtors, period. It’s based on business accomplishments. It’s based on service to the community. It’s broken up into percentages, and they rate you on those. By no means is it based on money and sales.

Leahy: Here’s a big question for you, Jimmy.

Leahy: I live in the Spring Hill-Thompsons Station area. I go to Columbia often. There’s a major thoroughfare down there called James M. Campbell Boulevard. Are you related to that James M. Campbell?

Campbell: Yes, that was my dad. My dad saw the need for a bypass in Maury County, and this was back in 1960-61 when that was built. I was about 16 years old and running his heavy equipment company at the time, working for him, and he saw the need for a bypass around Columbia. He couldn’t seem to get any help from the city or the county and he said, we’re going to build a bypass.

So he bought three farms around the south side of Columbia and said, I’m going to build a bypass. He took his equipment and built that bypass, and everybody said he was crazy and he’d go broke and everything else. And once he got it built, the state of Tennessee came in and said, well, Jeepers, we believe you’re right.

We believe that’s where the bypass needs to be. The city said if you’ll give us the right away to it, we’ll pave it, and keep it up for you. So that’s the way the James M. Campbell Boulevard bypass got built.

Leahy: Interesting. Tell us, what kind of guy was your dad?

Campbell: He had so much foresight that it was unreal. He could see into the future and predict what was going to happen. And I had that conversation with him many times, and everything he predicted just came true.

Leahy: What kind of dad was he for you?

Campbell: He was great. He was a hard-working man. He raised himself. He had several different jobs. He was a contractor, he was a farmer. He was actually a manager of the Valentine Agency here in Columbia for 30-something years. He worked hard. I’ve got one sibling, me and my brother, and he taught us well. He told us how to make a living. He taught us to do business. He was a great dad.

Campbell: Well, I didn’t inherit all his ability to predict the future. I may have a 10th of it, but not much of it. He’s a very unique individual. As far as the market goes, I think, of course, as you know, Maury County is the number one growing county in Tennessee and way up there, like 14th or something in the United States.

Maury County is growing. I’m sure all the counties and cities are having trouble with infrastructure and keeping up. As well as Spring Hill and now Columbia. But the market I feel like here would be good for a long time to come. I think we’ve seen the end of multiple offers on one property for the last few months. It’s not many of those coming up every day. The deal of getting $100,000 more than you listed your house for, that’s over with.

Now we’re back to reality. If you price your house right, you can get it sold. It’s staying on market a little bit longer. It’s not playing off the market in one day or three days. I think it’s going to take a full 45 days if you price your property right.

Leahy: Are you seeing a lot of people coming in from out of town?

Campbell: We are. I think the influx has slowed down just a tad in the last six weeks. But, you know, a lot of California folks coming in. But actually, I’m closing one this week with a lady out of Florida. So it’s not only California, it’s all over the world. And coming here, I think they want to make Southern Middle Tennessee, Maury County, their home.

Campbell: I think it’s mixed, and I think we’re trying to encourage them to live like we live, and I think that’s what they’re coming for, which I’m sure the taxes and everything else they like to get rid of that they’ve been paying in California. And I’m sure that’s one way to come here. But I think they’re looking for an easier, better way of life, and I think Maury County is a great place to do that.

Leahy: You grew up in the early 1960s in Maury County. And now, 60 years later, what’s a big difference, and how dramatic is the difference in Maury County today versus when you were growing up in it?