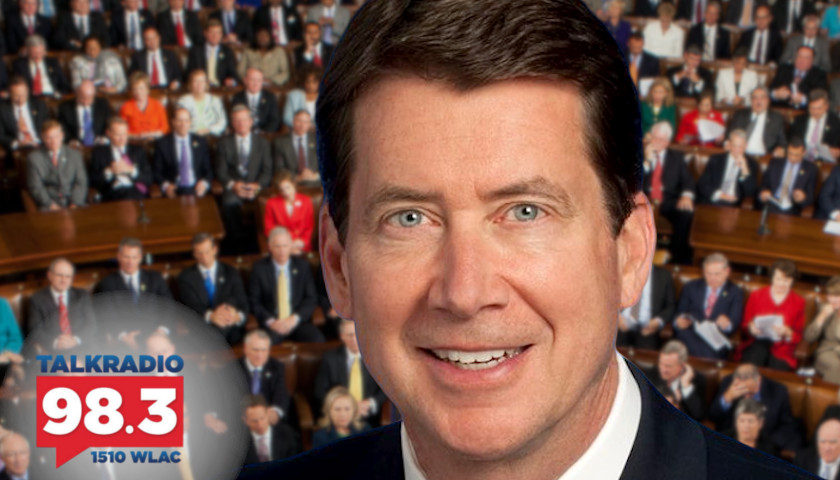 During the third hour, Senator Hagerty discussed the importance of the Georgia run-off elections and maintaining a Republican U.S. Senate. He also outlined the motivation behind the 10-day audit commission proposed by himself, Senator Marsha Blackburn, and Senator Ted Cruz.

Leahy: Congratulations on being sworn in. What was that moment like when you were sworn in as a United States Senator?

Hagerty: Well, I can tell you Michael what a great honor it is to represent the people of Tennessee. I’m a fourth-generation Tennessean and I tell you it touched me deep to my core to be bestowed this honor by the people of our state to represent them at a very critical time in our nation’s history. What I felt was the gravity of the responsibility ahead. And again, I can’t tell you how much I am honored by the opportunity to serve.

Leahy: And you’re exactly right. A very grave time in our history. Today are the run-off elections in Georgia. What do you think’s going to go on down there? And what are your comments on the Georgia run-off elections today?

Hagerty: You know Michael you have been talking about this. I’ve been talking about this. Really the fate of our nation may hang on the results of today’s election. And I would say this to any of your listeners who may be residents of Georgia. Legal residents of Georgia. Please get out and vote today. It’s absolutely critical. If for any reason we were to lose today the two seats and we don’t hold both of those seats that means that Kamala Harris if she is successful in this effort, could be the deciding vote in terms of the control of the United States Senate. She would put Chuck Schumer in charge of the Senate. And Schumer has made it clear what they’ll do.

They’ll first take Georgia, then they’ll change America. And that means packing the court. Forever changing the Supreme Court and turning it into a super legislative body frankly so they can backdoor their radical liberal policies. They’re talking about making D.C. a state and that’s more senators voting for more liberal policies because they’ll both be Democrats. And they may do the same thing with Puerto Rico.

They want to undo the 2017 Tax Act which was the impetus for turning our economy into the juggernaut of the world. That was really the point that made our GDP growth greater than any other nation in the world. They want to reverse all of that. They want to raise all of our taxes so every Tennessean can pay two to four thousand more in taxes every year and they want to take away our freedoms. We can’t allow that to happen and today is the stand to make certain that the Republicans maintain a controlled Senate.

Leahy: On Saturday you joined Senator Marsha Blackburn, Senator Ted Cruz, and eight other United States senators and issued a statement that said in part ‘we intend to vote on January sixth to reject the electors from disputed states as not  “regularly given” and “lawfully certified” the statutory requisite unless and until that emergency 10-day audit is completed.’ Tell us about how that came about.

Hagerty: Well, I’ve been concerned about this from the days following the election. And I’ve been thinking about the vehicle to address this for weeks. I could not Michael in good conscience vote to accept the results of this election when I have such deep doubts about what happened here. To simply rubber-stamp it would be to passively approve a process that I have very deep concerns about. In my view, we have situations where the Constitution was violated.

The United States Constitution explicitly puts the responsibility for state elections in the hands of state legislators. The elected officials in the state. The legislative body. And what’s happened in a number of states is that those legislative bodies have been usurped by activist judges. By executive branch officials. By unelected bureaucrats. What they’ve done is they’ve gone around the Constitution and they’ve used this pandemic as a lever to do it.

They use the pandemic as an excuse to achieve things they could never do before. And what the result has been that they’ve created so much chaos by flooding us with all of these mail-in ballots that the system has been shaken to its core. And we want to have this reviewed. We want to get to the bottom of it quickly. And we want to put those results back to the state legislatures that are responsible and make certain they act.

Hagerty: Absolutely. Michael, you’re the expert on constitutional processes. That is as you described it is exactly how it will take place. And then once the objection is raised and it’s got to be raised by both members of the House and Senate we’ve made clear that we’re going to be part of that process. Once that objection is raised we’re going to each return to our own chambers. That means the House members will stay there and the Senate will move back over to the Senate chambers and will engage in two hours of debate on the topic. There will be a vote.

Leahy: The 12th amendment says that the Vice President shall open the envelopes with the certified electors from each state. Will he begin that process? I guess he starts out alphabetically? Or will be there be some sort of delay that happens prior to his opening of those? Do you have any insights on that?

Hagerty: I’m not privy to any maneuvering that would be different from what the 12th amendment calls for.

Leahy: So in that case then do they start alphabetically with like Alabama?

Hagerty: That’s how I understand it.

Leahy: So when they get to Georgia, I guess alphabetically that would be the first one where they come to make an objection. He starts to open up, Georgia, and they start to count them. What happens at that moment?

Hagerty: It could happen well before Georgia.

Hagerty: I’m not saying that it will, it’s not been decided yet. It’s not certain which state it will be. But when an objection is raised and signed by a member of the House and a member of the Senate that objection will have to be very succinct and precise. It’s not going to be debated at that point. And then both bodies go back to their own separate quarters.

Again, the House will stay in their building and the Senate will move back over to the Senate chambers. That will be the precipitant of the two-hour debate. And at that point that they will be called to an end. We will come to a vote. And we’ll see how that vote goes. But my hope is that we will be able to register loudly and clearly that something has to be done about this.

With the commission that we’re talking about, we’ll get to the bottom of it. And I would think this shouldn’t be a partisan issue. I would think the Democrats, as well as Republicans, would want to stand for election integrity and they would be as concerned as I am about violations of the Constitution and about serious allegations.

Leahy: Will there be a single two-hour debate in the Senate where you look over all of these objections to all the states or we’ll each state to which there’s an objection get a two-hour debate?

Hagerty: Unless there is a procedural change my understanding is it will go state by state by state. So the very first state that is objected to that’s where the arguments will be made. All of the arguments could be, you know could be made at that point, but we could also see our objections raised for further states. Again precipitate the same two-hour process.

Leahy: So it could then in theory be if objections were raised to six states. It could be six separate two-hour debates. Is that your understanding of what the process would be like?

Leahy: Could possibly be the output. Are you getting a lot of pressure from people? For example, Senator Josh Hawley was the first to say he would not certify the electors. He wasn’t part of your group that will call for the 10-day commission. By the way, I think that’s brilliant to go to the precedent of 1877 when they did have such a commission to look at that. But his house was vandalized in D.C. Is that a concern that you might have that people are going to be violent to you?

Hagerty: I think it’s regrettable that this is what our country has come to. You probably also saw that the homes of speaker Pelosi and leader McConnell were vandalized over the weekend. Again violence has no place in this. We need to have a healthy debate again. I’d like to get to the bottom of this. I think the commission is the best way to do it. I also think that state legislatures are clearly the ones responsible for executing the for setting the rules and for executing those rules in their states.

And I want this commission to make very clear, you know, what their findings are and get those back to state legislators and let them do their job. This is something that I think every state needs to be questioning very carefully and going through the processes to make certain that voter integrity is maintained in every state in the union.

Leahy: Oh, you said something very important there. That the results of the audit will be to provide advice to the state legislators who have the authority in this case. Is that pretty much the plan then?

Hagerty: That is the plan right now which is to go through this process quickly. We’ve got a 10-day limit on it. could be done sooner, Michael. But it’s got to be done quickly. In my view, the questions that are there are the clearest issues having to do with violations of state constitutions of operators other than the state legislatures.

Leahy: Exactly like the Secretary of State and some cases.

Hagerty: Exactly. Or an activist judge.

Leahy: Exactly. Senator Bill Hagerty, congratulations on being sworn in yesterday. Thank you so much for joining us today.