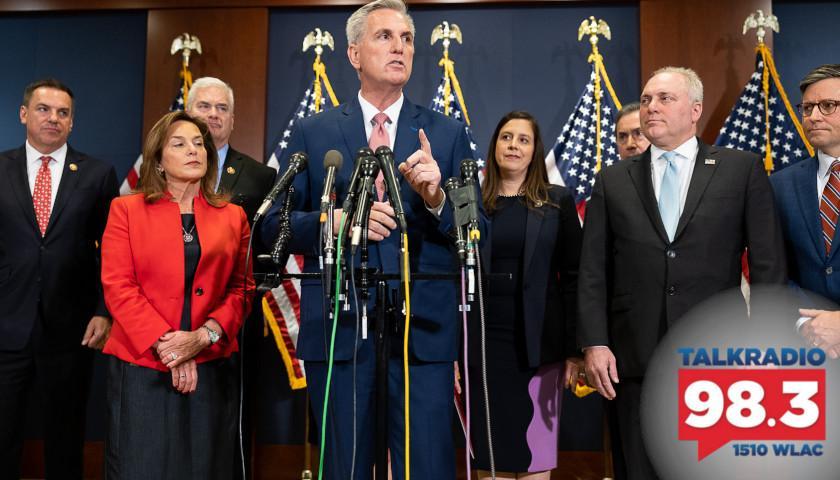 Live from Music Row Thursday morning on The Tennessee Star Report with Michael Patrick Leahy – broadcast on Nashville’s Talk Radio 98.3 and 1510 WLAC weekdays from 5:00 a.m. to 8:00 a.m. – host Leahy welcomed recovering journalist Clint Brewer in the studio to discuss the state of the Republican party and what needs to be done to repair it.

Leahy: In the studio, all-star panelist and recovering journalist Clint Brewer. Clint, now, I am by nature an optimist, and it’s been hard to be optimistic the past week and a half, weekend.

Leahy: But enough of wallowing in the mire. And it’s time to lay a path forward. And it’s a path – and I’m going to say this: I had expected that the nadir of our constitutional republic we would have reached a week ago Tuesday.

It wasn’t then. It is today. I’m declaring that we are on the road back. All right. And that we can actually win back the presidency and win back the Senate and win back and get a bigger majority in the House.

Brewer: Well, you know, in sports – and I know the listeners hate when we talk about sports, but I’ll make a sports analogy – it’s a lot easier to learn how to lose than it is to learn how to win. And right now, as the Republican Party goes, we have three back-to-back losing seasons.

Brewer: And lost the Senate.

Leahy: Lost the governorship in Arizona.

Brewer: Yes, we lost three states that the governors were sitting governors.

Leahy: But only one of them counts, because one was Massachusetts.

Brewer: Still, the head count’s lower than it was in the state House. The head count is lower … let’s not talk about the Senate.

Brewer: We’re not just losing in Washington, we’re losing in the heartland.

Brewer: Sheeple states – you need to win a presidential election.

Leahy: I went through the numbers.

Brewer: I know, it doesn’t hurt.

Leahy: But Michigan is a sheeple state; will not get it. Just don’t even waste your time.

Brewer: Well, Pennsylvania we’ve had before.

Leahy: Yes, I know, but that’s a sheeple state now. I mean, anybody that likes John Fetterman, give me a break.

Brewer: So, well, I mean, look at what their other choice was.

Brewer: Overarching – here’s what we have to do. I’m going to stick with sports analogies. We need a new head coach.

Brewer: Brand-new head coach. This means the party has to let go of the cult of personality of Donald Trump.

Leahy: Let’s just remind everybody what his first choice was here in Tennessee.

Leahy: Who was a carpetbagger. Nice person. I like her, by the way. She’s a very nice person.

Brewer: First and foremost, new head coach. And so what does that mean? Does it mean we start listening to somebody else? No, it means we go back to how these decisions were made pre-Donald Trump, which was organic, which means it’s a contest. It’s a discussion. It’s a debate.

Leahy: I think it is a debate now. I mean, Donald Trump has jumped in, and you won’t have the full field until September. But I don’t think his hold on the party in 2022 is what it was in 2016.

Brewer: So let’s just say we don’t have a new head coach. We’re going to have a collection of interims. So we’re going to get back to the point where the House leadership actually weighs in and picks the House candidates.

Leahy: So, in the Senate, we don’t have a new leader. We’ve got Mitch McConnell.

Brewer: Well, Mitch McConnell’s got a pretty good track record of winning elections when Donald Trump’s not in the way.

Leahy: I don’t know. He didn’t help Blake Masters. He weighed in in Alaska and put a lot of money behind … that seat was going to be Republican, ande decided he wants to get Murkowski. We don’t even know where this Tshibaka or whatever her name is there. I disagree with that. But it doesn’t matter what I think.

Leahy: All I’m going to tell you is Mitch McConnell got 37 votes to be the minority leader in the Senate and only 10 against him. So my message to Rick Scott, if you’re going to kill the king, make sure you shoot …

Brewer: And best not to miss.

Leahy: You best not miss. (Brewer chuckles) He’s out. There’s no change there. And Kevin McCarthy, he had this, I mean, when he came out with it, whatever this was, his Commitment to America.

Boy, that was boring. It was a terrible message. So he’s going to be the Speaker. We’re not going to have somebody new as a Speaker, so we got no change there.

Brewer: We just need better candidates. That’s all there is to it. The issue is on the side …

Leahy: The chairman of the GOP, Ronna McDaniel, a very nice housewife from Michigan, has presided over …

Brewer: There is nothing wrong with being a housewife.

Leahy: There’s nothing wrong with it.

Brewer: Being a housewife is a very difficult job.

Leahy: It is. I think she should go back to that job, because she’s not doing a very good job as chairman of the Republican National Committee, that’s for sure. She needs to go. It will be either David Bossie or Lee Zeldin. Somebody needs to replace her. She’s running for another term. Are you kidding me?