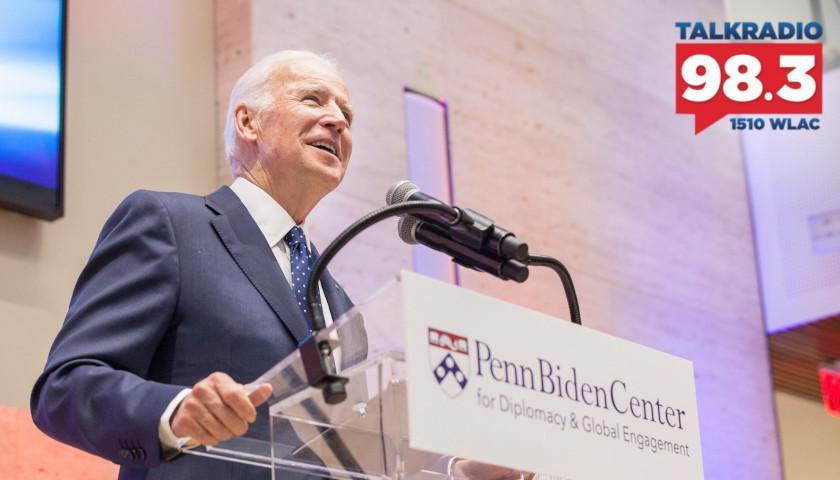 McCabe: Hey, Mike, Crom! Very good to be with you guys.

Leahy: Neil, what would the press say if today it had been reported that they discovered that former President Donald Trump had an office with 10 top-secret documents? How would the press have responded to that?

McCabe: I think they would say, listen, these things happen. (Leahy laughs) Mistakes are made all the time with time-sensitive documents. It’s not really a big deal. Obviously, there’s some kind of reasonable explanation and frankly, it’s probably a mistake.

And they would be pleased to learn that Trump knew nothing about it. (Leahy laughs) He was completely unaware. All these documents just lying around.

Leahy: Not exactly how they responded to the raid on Mar-a-Lago. We reported on Monday that a box containing classified documents, some of which were about Ukraine or Iran, was found at an office that former Vice President Joe Biden had with part of this Penn Biden Center that was financed by China just happened to find it six days before the midterms. Nobody knew about it. The lawyer just found them six days before the midterms, told the National Archives.

Carmichael: Hey, Neil, was this the same lawyer that found the documents in the White House on Hillary Clinton’s server?

McCabe: As I say, the bill is made.

Carmichael: Excuse me. All right, so at least they’ve upgraded a little bit on who finds things.

McCabe: There are two places you can find One American News in Washington D.C. The first is when you go to oann.com and download the OANN Live app. The second place is 101 Constitution Avenue Northwest, The same building as the Biden center.

Leahy: That building where his office is located at 101 Constitution, you have an office in the same building, One American News Network, and just miraculously, all these top-secret documents that apparently he didn’t know were there,

McCabe: How would he know that?

Carmichael: Now wait a second, Neil. It’s not knowing that they’re there when they are there. Is that an excuse? I didn’t think it was.

McCabe: Listen Crom, let’s just not make a mountain out of a molehill. This is just a tempest in a teapot. (Leahy laughs)

Carmichael: I’ll tell you, I think it’s going to be very interesting to see all these players who are essentially covering up for Biden and his administration will work in concert to cover up this stuff. It’d be very interesting.

McCabe: Listen to this, Crom. It’s like they discovered that it was Biden’s private attorneys, and the building management has confirmed that once the campaign started up, this office became abandoned.

But everything, all the desks and the lamps, the plants, secret documents from Ukraine and China, like all that stuff was still there. And then sometime before the election, a group of suits came in, and basically, Biden’s private attorneys conducted their own raid and found all the stuff.

So the question is, did these private attorneys have classification? Do they have a clearance? Do they have a need to know? Are they in the proper compartmentalization for top secret documents? Maybe these lawyers should go to jail.

Carmichael: And then did they cover it up?

McCabe: Of course, they covered it up.

Carmichael: Well, I know, but what I’m saying is, isn’t that primarily what all the Nixon people ended up going to prison for was the cover-up?

McCabe: Well, yes. We are coming up on some of these anniversaries of, like, the Saturday Night Massacre and stuff. But when they couldn’t tie Nixon to the crime so they said, the cover-up is worse than a crime, which is garbage because you can’t cover up a crime that you had nothing to do with.

It’s like he didn’t even know what was happening. The guy he hired to investigate it was John Dean, who had planned the investigation. And then, when Nixon pressed him, he stated evidence and said, Nixon is the cancer.

Leahy: Let’s go to some of the details, Neil on this. These top secret documents in his possession as a former vice president, he didn’t have the authority to have those documents, nor could he declassify them. Right? The president can declassify, but the vice president…

McCabe: Hold on. The vice president of the United States, he can’t even assign parking spaces at the White House.

Leahy: Well, there you go. So he has these documents. We know his attorneys say, oh, I just discovered them six days before the midterm elections of 2022. How long do you think those documents actually were in his office? A long time, don’t you think?

McCabe: I bet you they were there before Inauguration Day 2017.

McCabe: I’ll tell you, as a reporter, one of my favorite phrases of all time is when a lawyer says, “out of an abundance of caution.” That’s when the bells go off.

Leahy: So let me spin a scenario for you. Would it be possible that Joe Biden knew he had these documents illegally in his possession that had to do with Ukraine, where his son got hundreds of thousands of dollars?

Leahy: Maybe millions, from Burisma in Ukraine. What are the odds? And, he knew about it, and he said, I got to do some misdirection to point the finger at somebody else for doing this stuff.

McCabe: Survey says 100 percent. (Leahy chuckles) It’s like Alexa, do Democrats accuse Republicans of things they are doing to muddy the waters? Yes.

Leahy: So Merrick Garland, who was very much involved in the raid on Donald Trump in September, is now the person in charge of determining whether or not they prosecute Joe Biden for this violation of top security documents.