Crom Carmichael Details the Impending Implosion of the Biden Administration 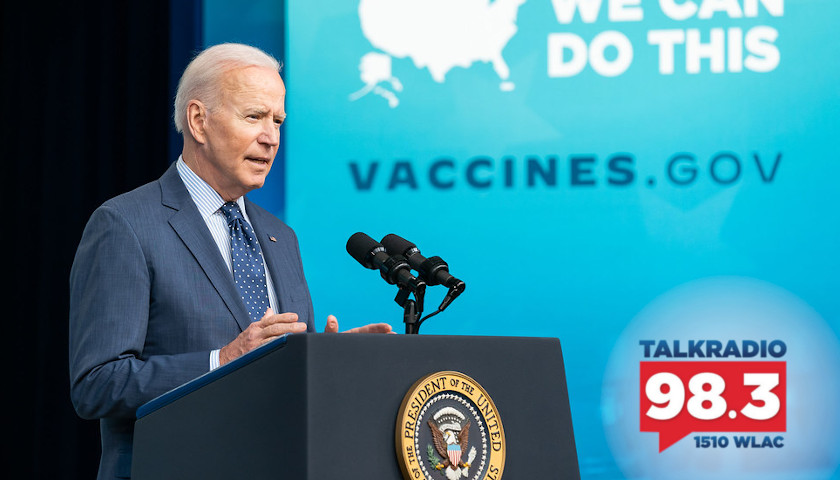 Live from Music Row Friday morning on The Tennessee Star Report with Michael Patrick Leahy – broadcast on Nashville’s Talk Radio 98.3 and 1510 WLAC weekdays from 5:00 a.m. to 8:00 a.m. – host Leahy welcomed the original all-star panelist Crom Carmichael to the studio to discuss the backfiring of vaccine mandates on federal employees and the looming implosion of the Democrat Party.

Leahy: I see you have the Happy Camper coffee that we just brewed for you. Are we doing okay with the coffee today?

Leahy: It’s delicious. Happy Camper Coffee is from BROASTTN, out of Cookeville. They sent us that care package. We thank them for it.

Leahy: Crom, you know what’s interesting? You came in and I said, well, Crom, what’s on your mind today? And when you told me what’s on your mind, I said, great minds think alike. Share with our listening audience what you want to discuss this morning.

Carmichael: I’m kind of looking at what I now believe is the impending implosion of the Biden administration. And frankly, maybe even of the left, at least for a period of time. And let me see if I can answer that. How many federal employees are there?

Carmichael: Two or three million. Something like that. And how many contractors? Another million or 2 million maybe? At least.

Carmichael: So he is forcing – and that’s the right word – he is forcing those four or five million people to all be vaccinated, regardless of their condition and regardless of their, I guess, their religious views or anything. Here’s my question. We know from the data that some people who take the vaccine, unfortunately, some people die from the vaccine. Is a person who forces somebody to take the vaccine accountable for a death or an extremely negative health outcome?

Leahy: When did that come out?

Carmichael: No, it was the National Education Association. I’ll read the paragraph: The National Education Association and the American Federation of Teachers are pushing against mandatory teacher vaccination. (Leahy laughs) So what you now see is that this was really all about politics because now that the force can affect the constituency of the Democrat Party, (i.e. government employees) all of a sudden they are going, whoa, whoa.

That doesn’t work that way. We’re the privileged. We’re part of your group. Now, who isn’t part of that group? Everyone else. And so everyone else is affected by what? Immigration. And where is most of the COVID coming from today? In terms of the percentage of the population, it’s coming from south of our border. And then Biden is bringing them in. He’s not requiring them to be vaccinated. You don’t even require them to do much of anything. He loads them on buses and planes and sends them out hither thither all across the country.

Leahy: It’s almost as if it’s a deliberate intention to spread COVID.

Carmichael: Why do you throw the word almost in? He knows what the facts are, and yet he continues to do it anyway. So when I look at the amount of force now, I look at the inflation that’s coming. That’s not coming, it’s actually here. Our prices are rising now at about one percent a month, which is an unsustainable rate if it continues.

And Biden still thinks that he’s going to throw in his three-point-five, which I’ve now heard is actually closer to $5 trillion, not counting the infrastructure of the actual stuff because it’s entitlement stuff. It’s not a budget where we’re going to spend $100 million on this bridge.

Leahy: To build something.

Carmichael: It’s an entitlement. Let’s go back. Medicare. When Medicare was passed, it was projected that by 1988, Medicare would be an $8 billion a year program. By 1988, it was an $80 million program. So he missed by a factor of 10 because it went to everybody who fit by definition.

If you give an entitlement that is significant enough, more and more people will make sure that they fit the definition. And so it’s just the same thing with the states that expanded Medicaid. The budgets and the cost of the expansion of Medicaid are much greater than what the so-called experts said.

Leahy: It always is, though, isn’t it?

Carmichael: But the point is, it’s because it is an entitlement based on definition, there is no ceiling. Because I’m over 65 and paid into Social Security, my entitlement is a fixed amount. In other words, every year it’s a fixed amount, and when I die, it goes away. But in the case of Medicaid, it’s not a fixed amount, even for the beneficiaries.

You can’t properly project the number of even people who will fit the definition. And so that’s what this so-called human infrastructure is. Now they’re throwing the word infrastructure at everything. I actually heard somebody talk about voting infrastructure.

Carmichael: The word infrastructure now has no meaning.

Leahy: It means nothing.

Carmichael: It’s just destroying the language when you take the current pop word and stick it on top of everything. But when I look at what’s going on, do you think that these mandates of federal employees and federal contractors are going to rile those people up who previously might have been – not have cared that much?

Leahy: Here’s the phrase that comes to mind, Crom. Rules for thee, but not for me. And federal employees and contractors think that should apply to them. Well, now they’re saying, oh, no, you don’t get away.

Carmichael: And now they’re on the side. What I’m saying is that there’s going to be very, very interesting to see if the empire strikes back on itself.

Leahy: Government-run schools. Thank you for that correction. But it’s interesting. Usually, the Democrats and the establishment media and the unions coordinate their messaging. So what this tells me immediately after President Biden, the legal but not legitimate president, my words not yours –

After he comes out and says that, well, we’re going to mandate these vaccines for all federal employees and contractors, like within hours, the heads of the teachers’ unions say not for us. This is a mistake.

And by the way, if you saw what’s happened with Jen “circle back” Psaki, the press secretary, she’s been absent from the podium for about three days. I think what they’re realizing is their messaging is a mess. And this latest kerfuffle with the teachers union, their core constituency.

Leahy: He probably wasn’t thinking that one through.

Carmichael: Well he doesn’t think anything through.

Leahy: You’re not being mean. You’re just observing the fact.

Carmichael: I’m observing 40 years. And when he does think something through, it’s meanness. And he’ll think through how to be mean. But in this case, he was simply reacting to a logical question. And that is if you’re going to urge businesses to mandate that their employees take the vaccine, are you going to do the same thing?

He said, okay, well, I’m going to force everybody to do it, too. What he didn’t realize is that a lot of his constituents don’t want to take the vaccine because they have their own personal reasons for not wanting to.

Leahy: Another Democratic leader who seems to have kind of gotten off-message maybe, depending,  Nancy Pelosi, speaker of the House. There was a report that she had ordered the capitol police to arrest anybody in the capitol who wasn’t wearing a mask. You saw that report?

Carmichael: Jerrold Nadler. He got caught. And AOC. The Democrats had been caught walking through the capitol without wearing masks, and they’re not being arrested. And by the way, this is exactly what we’ve been saying now since I’ve been coming on your show. And that is that we have a two-tiered system of justice. And now it’s out there for everybody to see.

Leahy: Everybody to see.

Carmichael: It goes so much further than the Constitution because it gets into this question of equal treatment under the law. And you have in the case of – I think it was St. Louis. It was the black chief of police who was standing up there saying, this is absolutely ridiculous.

Leahy: You can’t do that job in that case.

Carmichael: You can’t. And this chief of police is – man, I just feel so sorry for him and the police officers under him.

Leahy: There’s a lot of people that feel sorry for this country today, Crom.

Carmichael: Yes. And that’s what I’m saying. That’s the implosion, once it starts.