Andy Ogles on Critical Race Theory: ‘Once You Capture the Minds of the Children, You’re Changing the Next Generation’ 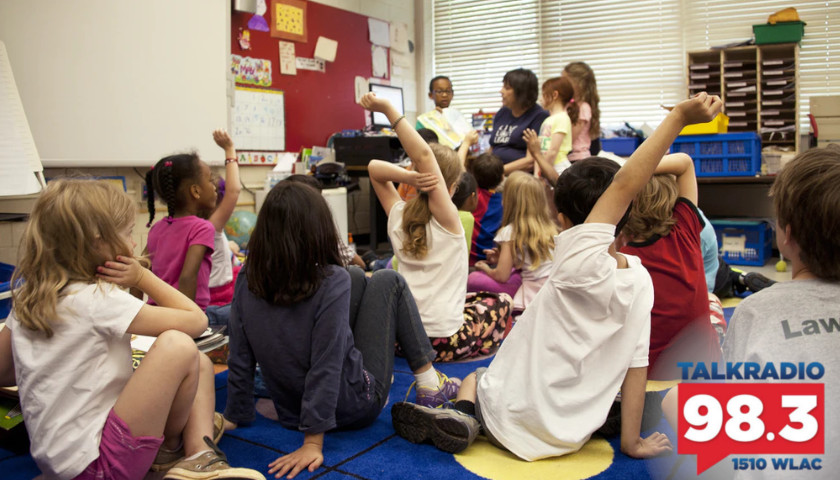 Live from Music Row Tuesday morning on The Tennessee Star Report with Michael Patrick Leahy – broadcast on Nashville’s Talk Radio 98.3 and 1510 WLAC weekdays from 5:00 a.m. to 8:00 a.m. –  host Leahy welcomed Maury County Mayor Andy Ogles in the studio to discuss Tennessee’s stance on Critical Race Theory and questioned why the state is not leading like Florida in the representation of its values.

Leahy: In studio mayor of Maury County. Yes, the bastion of freedom in Tennessee. (Laughs)

Leahy: Oh, we got to change that. The mayor of Maury County, the turbocharged bastion of freedom.

Ogles: About every two weeks, we’re adding phrases to this. Another month from now, this is going to be like a whole paragraph of descriptors for Maury County,

Leahy: So I suppose I’m also kind of a subset of that. I may be perhaps not an ambassador, but a promoter of Maury County as well. That turbocharged, bastion of freedom in Tennessee. I wanted to talk to you about this and get your reaction, Andy.

The rally last on Saturday night in Ohio, attended by now it looks like around 30,000 people. The former President began by lambasting the absolute disaster that the five months under Joe Biden have been.

The first thing he listed was the disaster at the border where the current maladministration is refusing to enforce immigration law. By the way, that refusal is probably an impeachable offense, in my view.

But he also mentioned the fact that they’re trying to force Critical Race Theory everywhere in K12 schools as well as in the military of all places, because, you know, nothing says defending the sovereignty of America like having a woke military.

I want to bring this back around to Tennessee. A couple of stories at The Tennessee Star today on Critical Race Theory. I wanted to get your reaction, Andy. So Corinne Murdock our ace reporter and Hillsdale Graduate has this story.

Part of the Wit and Wisdom Curriculum May Violate Tennessee’s Critical Race Theory Ban, According to Moms for Liberty. The parent coalition is concerned that the Wit and wisdom curriculum approved for use in 33 counties and promoted by Governor Bill Lee’s handpicked Secretary of Education Penny Schwinn, may violate Tennessee’s K-12 Critical Race Theory ban.

My question to you is, why does Governor Lee pick a Secretary of Education who’s promoting a curriculum that looks like it violates the new law banning the teaching of the tenants of Critical Race Theory in K-12?

Ogles: But you even go back before that. Why would we have a Commissioner of Education, Penny Schwinn who puts forth this well-being initiative where every child zero to 18 would be interviewed by an agent of the state without their parents’ permission or presence?

And why wasn’t she fired then? And so why would we be surprised? And keep in mind, Critical Race Theory is a label that represents an agenda. It’s not necessarily a curriculum. And so we’ve got to be careful with these labels because then they say, well, wait a minute.

And so why she hasn’t been fired by either the governor or by the General Assembly demanding her resignation is a travesty of the values that represent Tennessee?

Leahy: Why would somebody who purports to be conservative hire such a person?

Ogles: He’s not. At the end of the day, the governor is a nice guy, but he’s not a conservative.

Leahy: Well, I think there’s a general consensus that he’s a nice guy. Asterisk, my question to you is if he’s such a nice guy, why does he never respond to The Tennessee Star inquiries?

Why has he not shown up on our radio program? We can get an exclusive interview with the former President of the United States, but we can’t get Governor Bill Lee to return our phone calls.

Ogles: I would love to sit in studio across the desk and have this debate. The three of us. It’s an open invitation to talk about some of these substantive issues facing this country in the state of Tennessee.

Tennessee should have been leading the past 18 months the way Florida and Ron DeSantis have led. And when you compare Tennessee to Florida, we have failed across the measure.

Leahy: Yes. Florida is kind of the standard, isn’t it? Isn’t Ron DeSantis, the kind of governor that every state needs? Every state needs a Ron DeSantis pushing against the egregious intrusions upon state sovereignty and the violations of the fundamental concept of federalism that are coming out of the mal-administration of the current occupant of 1600 Pennsylvania Avenue, Joe Biden. That’s my view. Why can’t every state have a Ron DeSantis?

He stood up to the cruise industry, a multi-billion dollar industry forcing them to change their policies. Meanwhile, in Tennessee, we don’t have the courage, if you will, to take a stand and protect individuals from these mandates.

I just saw in The Tennessee Star that you have a college in Memphis that’s going to require all students to get the vaccine. You have to show proof of vaccination in order to come to the University.

College students aren’t at risk for COVID. Let’s identify the vulnerable and make sure it’s available to them. Then we’ve got to move on and move forward but these mandates are a direct infringement on liberty and medical freedom.

This vaccine now has a warning on heart inflammation. So now we’re a year and a half into this thing, and we know more about this vaccine than we knew just a few months ago and they’re having to put warning labels on it.

And yet the government is requiring and mandating it. Holy crap! This is not acceptable.

Leahy: It’s very interesting how the bureaucrats are playing this Critical Race Theory ban on the tenants of Critical Race Theory. I kind of get the impression that the Educrats who are almost all lefties running the major school systems in Tennessee, the big ones, I think they’re kind of playing us.

It’s my view, anyway, but they say one thing, and then I think they kind of do another. Let me just get your reaction to this story, and we ought to have these guys in if they’ll come in. It’s interesting.

The spokesperson for Metro Nashville Public Schools ideologically, not necessarily what we’re aligned with will talk to The Tennessee Star. Governor Lee will not. I don’t know if I told you, but former President Donald Trump will exclusively talk to The Tennessee Star and The Star News Network. Just in case, for a matter of comparison right now, interestingly enough.

Metro Nashville Public School spokesperson Sean  Braisted. Do you remember him? He used to be the spokesperson for Megan Barry.

Ogles: There you go.

Now you do. We asked whether Hughes would implement any of the banned tenants in Metro Nashville’s forthcoming Equity Roadmap. And if Metro Nashville Public Schools plan to implement Critical Race Theory.

Here’s what Sean  Braisted responded. “Mr. Hughes was not suggesting those reading materials be a part of the school curriculum, but rather that those interested in discussing the subject read about what they are discussing.” Really? Really? I’m not quite buying that, Andy. I don’t know. Maybe I’m just too skeptical about Educrats.

Ogles: When you look at this trend that’s taken place over the last 10, 20, 30 years, the Educrats as you say, first got into the universities. Now they’re pushing it into the seminary.

They’re pushing into our high school and now or even our elementary schools. And once you capture the minds of the children, you’re changing the next generation. You’re affecting politics.