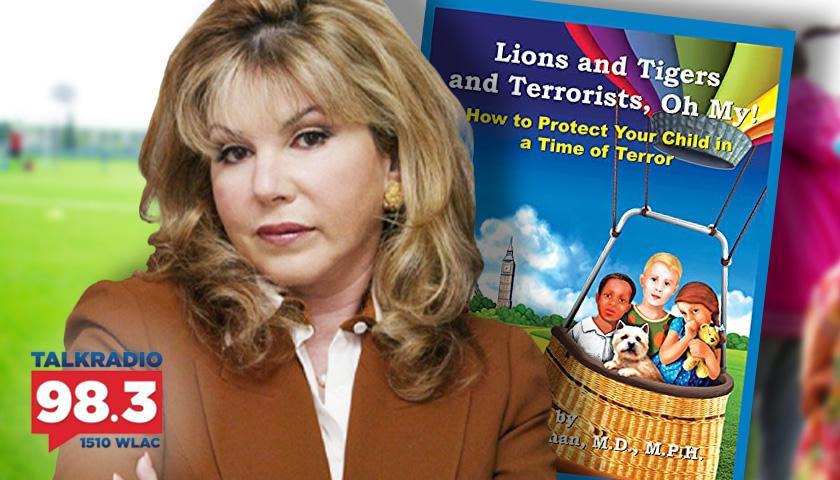 Live from Music Row, Monday morning on The Tennessee Star Report with Michael Patrick Leahy – broadcast on Nashville’s Talk Radio 98.3 and 1510 WLAC weekdays from 5:00 a.m. to 8:00 a.m. – host Leahy welcomed America’s psychiatrist, Dr. Carole Lieberman to the newsmaker line to talk about terrorism and children in her new book, Lions and Tigers and Terrorists, Oh My!

Leahy: We welcome to our newsmaker line. Dr. Carole Lieberman, America’s psychiatrist. She’s a psychiatrist who was trained in a medical school in France and was at Bellevue, as an intern. She now has a practice in Beverly Hills and has some new books that we want to chat about. Dr. Lieberman, welcome to The Tennessee Star Report.

Leahy: Are you in Beverly Hills right now?

Lieberman: In the general area, yes.

Leahy: So it is like a dark 100 there. Thank you for getting up.

Carmichael: As we in Tennessee would say, bless your heart. (Chuckles)

Leahy: What time did you get up to do this interview?

Leahy: Oh, my goodness. What time do you usually get up?

Leahy: All right, well, not too bad. Not too bad. But still, you’re up early. Thank you so much for joining us. Boy, does America need a psychiatrist right now.

Lieberman: Things are getting crazier and crazier.

Leahy: You’ve got a new book out. Lions and Tigers and Terrorists, Oh My!: How to Protect Your Child in a Time of Terror. The website is terrorism4four kids.com. Tell us about that book.

Lieberman: Well, first, it is the only book about terrorism for kids. It’s a book where the first half is for grown-ups, parents, and teachers and the second half is a picture book for kids. Terrorism light.

America hasn’t really been thinking very much about terrorism while we’ve had the COVID pandemic and so on. But terrorists have not forgotten about us. And they have been and are still, especially now in Afghanistan, planning to take over the west as they have been for 1000 years.

And so I have been actually since 911 because I’m born and bred in New York City And so since 911, I’ve been helping people cope with the memories of 911 which are still affecting us and becoming more resilient for the future.

Leahy: I think it’s a well-timed book. Crom Carmichael is our all-star panelist in studio with me. We were both really intrigued by the fact that you have a practice in Beverly Hills. Crom has a couple of questions for you, Doctor Lieberman.

Carmichael: I’m really interested in the subject matter of your book. And that is, it sounds to me like it’s helping people, first of all in New York and maybe even some people in California who are affected by 911, but certainly the people in New York.

Tell me a little bit about your experience and the trauma that is ongoing, but more importantly, about how you are counseling people as you correctly point out, the terrorism that still exists, and the likelihood that more strikes will take place. How do you go about including that in a psychiatry practice?

Lieberman: First of all, let me just say something that it’s not just yes, of course, New York and Washington, D.C. that were the most immediately affected by terrorism. Of course, there have been attacks in Boston, the Boston Marathon, in Florida, and the Pulse nightclub in California also.

But really it is affecting all of America because, for example, after 911, people ate more comfort food. People started eating more comfort food because they were anxious, and that started the obesity epidemic.

And also people started using more drugs and alcohol and so on. And these things are still ongoing. I know that people like to think that it’s really that it’s over or that it’s not still lingering, but there is also the younger generation, the kids who were either alive then or who were born to parents who were affected by 911.

So it really is still affecting our society. But to your question, how do I get people to become more resilient for the oncoming attacks? For the kids, I have these 10, in pictures and I have these 10 things that they can do for themselves, for the grownups, I have 88 things to do with kids to make them more aware and make them more resilient and more ready for the future.

And the terrorism, there’s been more terror in our cities, not necessarily terrorists. I mean, in other words, radical Islamists. But, you know, our cities have become there are attacks on the police, for example, and so on.

Things like don’t watch violent media, things like be open hearted. Don’t just judge other kids by how they look. What’s important is what’s in their heart. So it’s a whole variety of things.

But basically, before going into these ten things that kids can do for themselves, the part of the book that’s for kids actually describes things like what is a terrorist. A terrorist is like the bully on the playground. Osama bin Laden, the most renowned terrorist.

I say famous, not renowned for the kids. You know, things like that. I talk about the airport. Why do we have to go through the TSA at the airport? The Shoe Bomber. The Boston Marathon. Important things in terrorism that I described for kids in a way that won’t terrify them.

Lieberman: In terms of my practice, I have patients of all ages and all problems. It’s not just people who have been traumatized by terror who are in my practice. It’s really anybody and all couples going through a divorce. All kinds of problems that you can imagine.

Carmichael: But your book is more focused on the psychology of dealing with terror.

Lieberman: Right. I’ve done two books about terrorism. I have a podcast called The Terrorist Therapist Show that I do about every other week where I talk about the hottest topics in terror. That’s another thing. For example, we just had this weekend, the attack in Colorado.

So I tweeted about it and I’m probably going to be talking about how, don’t forget, it isn’t necessarily just a hate crime in terms of hate against gays by just some ordinary person.

It could be someone copying Omar Mateen, the terrorist who perpetrated the Pulse Nightclub attack in Florida. Because he was a terrorist and he chose this nightclub and that was going along with his beliefs against gays and so on. So I remind people about these kinds of things. I don’t want people to fall asleep. You know? (Chuckles)