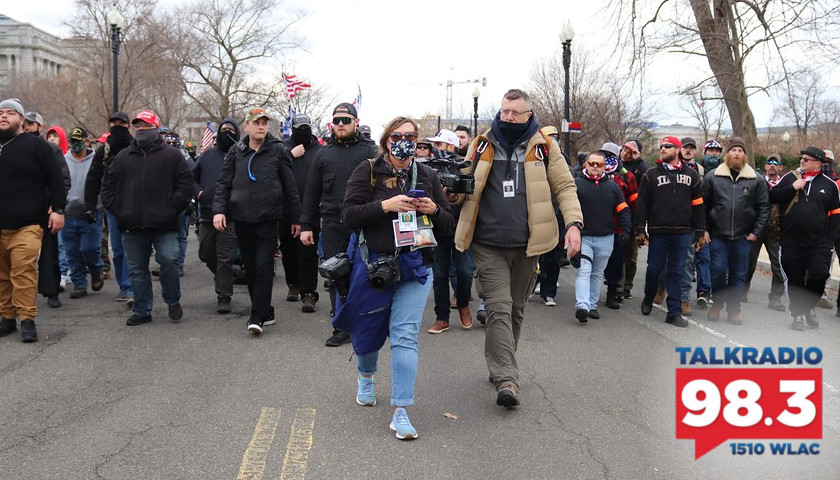 Live from Music Row Thursday morning on The Tennessee Star Report with Michael Patrick Leahy – broadcast on Nashville’s Talk Radio 98.3 and 1510 WLAC weekdays from 5:00 a.m. to 8:00 a.m. –  host Leahy welcomed Tennessee Star Senior Reporter Laura Baigert to the newsmakers line to describe what she experienced on the ground at Wednesday’s Trump rally in Washington.

Baigert: We left our hotel, about a little after 7:00 a.m., and took the subway up to the Ellipse Park area. The park itself was closed off and you have to go through secret service, but we stood in a large field like outside of that fenced-in area where there was a monitor there. When we first got there there were people but within a very short period of time this field and everywhere around that we could see, no one could move. We were just stuck there like a Times Square type of New Year’s Eve event. It’s hard to describe.

Those of you who have been to these kinds of rallies know. But if you haven’t been to one, there is love and camaraderie. Everybody had signs and flags. And it was just great. And then, you know people were cheering and chanting USA. Then the speakers came out. Very calm, peaceful, and very very cold. We stood there for more than an hour waiting for the President to come out.

Leahy: He gave a speech and what was your reaction to that speech?

Baigert: Honestly, I think people thought it went a little too long and we were freezing. And we were probably hoping for a little bit more action and that we’ve done the talking and so forth. But we were hoping for something more definitive. But course, you know, we love our President. And so everybody was enthralled to have him out there. And he spoke for more than an hour. So that was a pretty impressive thing for him to come out like that and to spend that much time there. And then he said let’s walk together down Pennsylvania Avenue to the Capitol.

Leahy: CNN is reporting that he incited violence. Did you hear him incite any violence?

Swain: Laura, I noticed that he actually said we were going to walk peacefully to the Capitol.

Baigert: Peacefully. And walk together. It was a walk. It wasn’t like we were going to storm down there. He didn’t say anything like that.

Leahy: So how long did it take you to walk from the the mall down to the Capitol? And what did you see? And when did you first learn that the Capitol had been breached?

Baigert: Okay, so it probably took more than half an hour. We walked down Constitution Avenue because we were kind of in the middle of the field. So when you came out of the field you landed right on Constitution Avenue. And as we crossed all of the cross streets we could see as many people walking on Pennsylvania Avenue and then on the other parallel street in the other direction.

We were probably 20 people wide walking and it probably took more than a half an hour to get from the park to the Capitol. And I can walk really fast. I walk five to six miles a day. So but you could not move because there were so many people. And people were chanting USA. And you know, just again everybody being very kind to each other and no problems along the way. I will say there were people who a couple of times chanted the F expletive Antifa.

Then we got over to the Capitol and there were so many people that were outside the circle around it that you didn’t really even know what was going on. By the time we got there, there were people on the steps of the Capitol. But nobody really thought anything of it. And then after we got closer into that inner circle and we could see that there was some smoke on the balcony and we couldn’t really tell what was happening.

A metro police officer told us, said I would advise you not to go there, over there. And he said there’s trouble And I said, well, what do you mean by trouble? He said, well citizens. And I said but what kind of citizens what do you mean? And he wouldn’t elaborate on anything. So we walked over just to see more of what was happening and we could see smoke bombs going off and tear gas. The fire extinguishers were being sprayed, but I think that was by protesters.

Part of the reason it looked so strange was that they were setting up for the inauguration. And that’s why the fencing was up because they’re putting all the stuff out there for that. So there were people calling with a bullhorn saying move forward or else they’re going to push us out of here and come up onto the bleachers.

I mean, this is somebody with a bullhorn and the only person you could hear and that’s all they were saying was move forward, move forward. Nobody was telling anybody to go into the building or breach the building. And I would have to say that anybody who was over there was already there and got into the building was already there and had that planned much earlier. Because you could not have walked from where we were to get over there in that amount of time.

Leahy: So the people in the front, were they Trump supporters? There have been some reports that they were Antifa wearing Trump gear. Do you have any indication one way or the other as to who the people at the Capitol were?

Baigert: All I’ve seen is what’s been on social media. So you know, I don’t put any faith or stock in that. There was someone reporting from The Blaze last night. There were many people on the ground from Blaze TV that were interviewing people on that. They were Trump supporters. But the thing that you need to understand is that we have people with us who were here in 2010 during the Tea Party and Glenn Beck’s rallies and there were like a million people here.

And they said there was every bit as many people there and maybe more yesterday. How many people went into the building? 20 or 30? This is not the typical Trump supporter. None of us would sanction this. I think it’s just starting to be resonating with us this morning, as we think about it, is that this is the people’s House. As soon as we start going down the path of we have no right to be there to see our elected officials doing the people’s work we have born into the wrong argument here.

And this is much different than what happened over the summer where private property was destroyed. Somebody was killed yesterday. Did we riot? Burn anything down? Or damage anything because she was killed? That’s one of us. And another really disturbing thing is the Democrats and many of the Republicans went and sanctioned and endorsed this kind of behavior with breaching the Capitol when Kavanaugh was being sworn in.

Leahy: That’s a very very good point. Laura Baigert, thanks so much. And be safe coming back here to Nashville. We really appreciate your report.