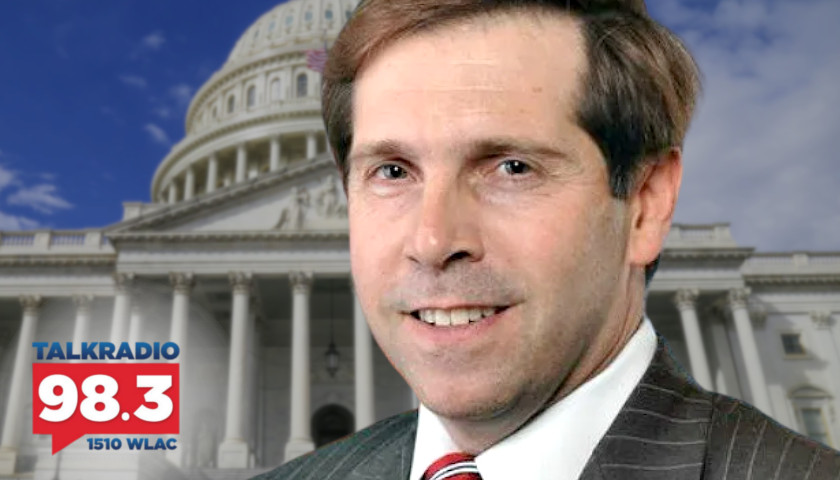 Live from Music Row Friday morning on The Tennessee Star Report with Michael Patrick Leahy – broadcast on Nashville’s Talk Radio 98.3 and 1510 WLAC weekdays from 5:00 a.m. to 8:00 a.m. – host Leahy welcomed Tennessee Congressman (R) Chuck Fleishmann to the newsmakers line to discuss the incentivization of illegal immigration by the Biden administration and whether or not it was an impeachable offense.

Leahy: We are joined now on our newsmaker line by Congressman Chuck Fleishmann, who represents the Third Congressional District of Tennessee. Welcome, Congressman Fleishmann.

Fleishmann: Michael. Welcome.  And I am joining you from the greatest mid-sized city in America. Chattanooga, Tennessee, and always glad to speak with you and our great friends in our outstanding state capital in Nashville sir.

Leahy: I like that phrase. The greatest midsize city in the country. Chattanooga is a delightful place. I go down there a couple of times a year and I really enjoy it. Very beautiful. And I’m glad to see you’re so proud of the city you represent.

Fleishmann: Well, thank you so much. Actually, I’m so proud of the state I represent, Michael. As you know, I’m a graduate of the University of Tennessee in Knoxville.

I love Knoxville. I love Nashville. I love Memphis. But really, when I speak with world leaders and national leaders, Tennessee leads in so many categories because we just get it right.

We’re about small government, no state income tax, and we are a right-to-work state.

We get it done right in Tennessee. It makes my job a lot easier when I’m articulating my conservative message in Washington.

Leahy: You are about to take over my role as the unofficial ambassador to promote the state of Tennessee because I do that on my program.

I get people that are calling in from New York City, and I tell them at the end of our interviews, hey, we have no state income tax in Tennessee. When are you moving? (Chuckles) Most of them are tempted by it.

Fleishmann: There you go. We are one of nine states that don’t have a state income tax. But we’ve also made sure that we didn’t let these other taxes kind of creep in like some other jurisdictions did.

And I have fought against taxation, really, before my time in Congress. And if you remember years back, we fought very hard to make sure that Tennessee never had a state income tax.

Leahy: Now, let me ask you about a problem that you’ve been on top of, and it’s quite bothersome and that’s this Chattanooga Migration Center child abuse scandal.

Fill us in on what the Biden administration has done, sort of behind our backs and against the specific instructions of Governor Lee.

Fleishmann: Well, Michael, as you know, my role as the ranking member, the highest Republican on the Homeland Security Subcommittee of Appropriations, puts me right in the thick of this.

I worked hand in hand with former President Trump on this issue. And we had great success with the buffer policies. We had record low numbers of people coming across. We were apprehending them.

We were building the wall. When President Biden and his administration took over from day one, they took us in the wrong direction.

They incentivized illegal immigration and migration to this country. And each and every time they’ve had a chance to deal with it, they’ve made the wrong decision.

They’re wrong and they are oblivious to this. But this migrant situation in May, as a relevant member of Congress on the relevant committees, I found out about this on the news.

So what did we say? This is going to cause more problems. And just a few weeks ago, it did. The state has shut down this migrant facility.

This should have never happened to begin with. When it did happen, I said there were no problems. And it’s just a multitude of problems now. It’s a humanitarian crisis.

Leahy: Let me ask you a big question here. Are you ready for a little bit of a curveball? Here it comes.

Leahy: Are you really? Did you play baseball in high school or in college?

Fleishmann: I played some in high school. I didn’t play in college because I wanted to get through in three years. But when I went Congress the day at a baseball team, I went out and I tried out, and I played in the 100 games about a decade ago.

And have a great picture of that which kind of went viral. But I still play. Darryl Levins is my batting coach.

Fleishmann: But yes sir. I’m ready for a curveball.

Leahy: Here’s the curveball. So here’s how I look at it, and I’m going to ask you a big question and see what your response is. I look at our immigration laws, and I look at the Secretary of Homeland Security, Alejandro Mayorkas, and it looks to me like not only is he not enforcing those laws, he’s doing the exact opposite of those laws.

He’s violating, in my view, his oath of office. Now he’s been confirmed by the Senate. To me, I think he has committed by violating our immigration laws.

Fleishmann: The problem really lies with Joe Biden and the Biden administration. All of the other secretaries take their orders from the top.

And I don’t know where the top is taking their orders or direction from. I’ve said this from the inception that the Biden administration from the top, including Joe Biden, is rudderless and confused.

On immigration policy, he’s not rudderless and confused, he’s horrifically wrong and he’s hurting this country. But let me point to an example that proves what you said is correct.

We passed an appropriation bill, which the House, the Senate, and the president of the United States, former President Trump signed into law for fiscal 2021, which basically says roughly $2 billion will be used to construct a border wall.

President Biden refused to obey the laws that were on the books to build this, this year. He wanted to stop it. I want to be very clear about this.

It’s a series of crises. So whether or not it’s impeachable or not, it’s just plain and simply wrong. They’re never going to really impeach them with Nancy Pelosi and the way the Senate is.

I stood strong against both fictitious attempts to impeach President Trump, which were ridiculous and wrong. I just want to fix this policy because it’s really hurting America.

Leahy: If the Republicans take over the House of Representatives in January 2023 and Mayorkas continues to violate immigration law and apparently you’re pointing at the top, which is very reasonable.

Biden would continue with that. Would that continued violation of the law by both Mayorkas and Biden? Would that be an impeachable offense in the next session?

Fleishmann: I think we would have to look at the specific conduct and or lack of conduct and apply the law to the facts. One of the horrible things and I felt so bad for our great former President Donald Trump when he was impeached the first time and then the second time was an out and out force that they tried to impeach him again.

The tool of impeachment was put there for our Founding Fathers to deal with a completely different set of circumstances.

I’m afraid now, regardless of party, we’re going to start seeing the use of the impeachment vehicle much more frequently. I don’t know if that is good for the Republic or not based on where things went.

But clearly, the Pelosi-led House degraded itself when it impeached President Trump twice. I want to be very careful with that. So we’ll wait and see.

I’m going to focus on doing my job and trying to make Biden and the American people realize the abject failure of the Biden administration in this key immigration situation.

Leahy: Thanks so much for joining us today and please come back again.

Fleishmann: Michael, keep selling the great state of Tennessee. We’ve got a great product, great people, and the best place in America to live.

Leahy: We are in total agreement. Thank you, Congressman Chuck Fleishmann.