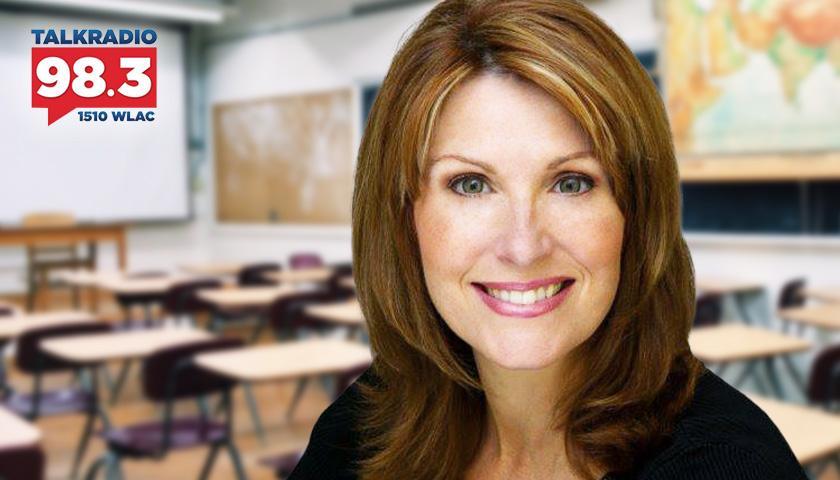 Live from Music Row, Monday morning on The Tennessee Star Report with Michael Patrick Leahy – broadcast on Nashville’s Talk Radio 98.3 and 1510 WLAC weekdays from 5:00 a.m. to 8:00 a.m. – host Leahy welcomed CEO and Founder of PJTN, Laurie Cardoza-Moore in studio to talk about the upcoming event this Sunday called, Taking Back America’s Children for families of students.

Leahy: It’s always great to have you here in studio. It’s so much more fun to be in studio.

Moore: I know, I just can’t see doing it over the phone. Doing it live! We have to do the phone, okay fine. But this is more fun.

Leahy: Now, you do have to get up early.

Moore: I know, I was up early.

Leahy: You were up early. So thank you for that. A big event coming up this Sunday. Taking Back America’s Children will be held from 7:30 a.m. to 5:30 p.m.. You’ll be there as well as many speakers there. People can go to pjtn.org to sign up. Tell us about this event, Laurie.

Moore: This is an extension, Michael, of what we did a decade ago. And you remember that a decade ago we found a Pearson published textbook that was not just antisemitic, but anti-American, anti-Judeo Christian, and anti the values that our nation was founded upon.

And that was in Williamson County. This was a parent who came to us, whose student was in the 9th grade. He came home questioning his faith. Now, listen to this and all of our audience who are believers.

He came home questioning his faith. He said to his mom, he said, who has legitimate rights to the land of Israel? And this is a kid who came from an evangelical home. He had been in youth Bible studies.

He knew what the word of God said. And she said to her son, well, what does the Bible say? He said, no, Mom, I know what the Bible says, but tell me the truth. Who has legitimate rights to the land?

That mother, of course, being her family background is Jewish. They have Jewish ancestry. She started to look into the materials that he brought home that day, and she contacted me and she said, you will never believe what we found in Williamson County school is what we’re teaching our kids.

And so she brought me the book. I reviewed it cover to cover, and we started the process of trying, as most parents have been doing, with these school library books and some of the textbooks and the wit and wisdom that our children are being subjected to this garbage, these lies.

They looked at the book and they were to vote. One night, there was a school board meeting, and of course, we went on the radio two weeks prior to that meeting, because I knew I had to get parents and citizens to show up at that meeting.

And we started airing spots, just examples of what we were finding in this textbook mom and dad in Williamson County. Do you know what your kids are being subjected to? And that night at the school board meeting we ended up having standing-room-only.

The parents lined up to tell the school board, we want these books removed. We want this book removed. I got up and I said, this is an election year, and if you don’t remove this textbook, we’re going to remove you from office.

They voted that night. They slapped the parents and citizens in Williamson County in the face, and they kept the book. They said, ‘Oh, the issues in the book do not warrant removing it.’ So we went to work. We had four months to be able to flip that school board.

We looked for parents who are citizens, tax-paying citizens that were willing to run for the school board, and the community got behind them within four months. We had four months to do it.

Michael, come election day in August, those six sitting school board members that were up for reelection, we removed all six. Well, it’s been a decade, and we’ve watched moms and organizations come in to try to right the wrong, and we still have a problem in this school district. The school board has got to go, and that’s what this training is about.

That’s why we’re hosting this meeting coming up this Sunday and why it’s important that you as tax-paying citizens, as parents with your children or even grandparents with grandchildren in the school system, you need to show up at this so you can be trained and can hear from top-tier leaders who are coming in from across the country. We’ve got Robert Arnakis, who’s coming in from the Leadership Institute.

Leahy: And we’ll go through more details. I think here’s the bottom line on all this. The educrats and the left have an ongoing onslaught that keeps bad curricula in the schools.

Leahy: And on our side, you have to constantly fight, fight, fight. This event next, this coming Sunday will be an opportunity for people to learn about how to fight back. It’s Taking Back America’s Children-National Southeastern Conference.