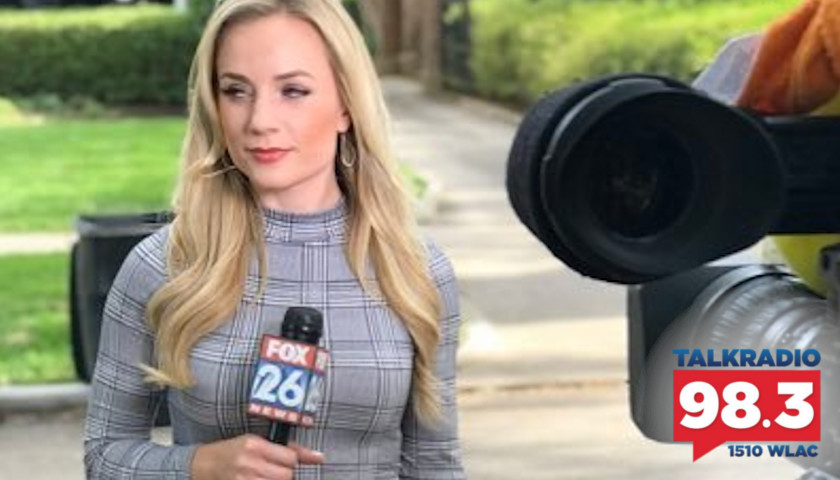 Leahy: We are joined now on our newsmaker line by Nick Givas with Project Veritas. Good morning, Nick.

Givas: Good morning. Thank you for having me.

Leahy: It’s been a busy day for you. There was a report about a Houston local television news reporter by the name of Ivory Hecker. On Monday she announced on air that she’s going to share secret recordings of Fox News with Project Veritas. She was with Fox station KRIV in Houston. Tell us what’s happened since that announcement.

Givas: Well, as you said, Ivory was suspended after she announced on air that she come forward to Project Veritas. And then following that as a live on-air that suspension, she was seemingly let go by the network or excuse me, by the affiliate Fox 26. And this is after she claimed that there were acts of “corruption” within the Houston affiliate.

And she felt that the actions were not, I guess, honoring real journalism. And she claimed that leadership prioritized corporate interest over that of the viewer. It shouldn’t shock a lot of people. But it’s certainly surprising how many of the station’s staff said these things so nonchalantly on camera.

Leahy: Now, did she bring these secret recordings to Project Veritas?

Givas: Yes, she did. She stepped forward as a whistleblower and she obtained recordings of her superiors telling her to prioritize the opinion of the station’s general manager, the company CEO, and basically anything but that of the audience.

And her quote was, ‘What’s happening within Fox Corp. is an operation of prioritizing corporate interest over the viewers’ interest, therefore operating in a deceptive way.’ And she felt that deception in her words and that corruption was enough to push her conscience to push her to come forward.

Leahy: Will Project Veritas be sharing these recordings with us publicly?

Givas: Yeah, they’ve come out. Actually, we did release the story. It is out live on projectveritas.com and you can follow James O’Keefe on Telegram. It’s one of his main social media hubs.

We are also on Instagram. And you can read all of these quotes. You can read everything from what I just said about the viewers and the GM and the CEO being the main audience to them telling her to cease and desist as a quote posting about hydroxychloroquine, the COVID drug on social media.

They really came after here on quite a few issues it seems just because they didn’t like the outcome.

Leahy: Yeah, there it is. Projectveritas.com. I can see it right now. Fox 26 TV reporter tells all to James O’Keefe. Tell our listing audience if you would Nick a little bit about Project Veritas and how I got started, James O’Keefe, and when you joined them, and what your role is there at Project Veritas.

Givas: Sure. I officially joined in March. I unofficially began working with them in January at the beginning of the year. And as managing editor of the newsroom, I help with production.

I help with recruitment of people as far as whistleblowers. I help with communications. I do interviews such as these. I go on TV, on radio, and talk to people like yourself about people such as Ivory that come out of the shadows and that risk everything to tell us their story because they trust us with it given the sailings of the mainstream media and a lot of other media outlets.

Not only to keep the identity of the person secret or to keep their story, intact but to tell the full truth on their behalf. And that’s what I try to do in my role. As far as Project Veritas itself, it started about 11 years ago now I believe. 2010 or 2011 was the official launch date. Our CEO, James O’Keefe has been muckraking ever since.

Leahy: He sure has. (Laughter)

Givas: And everybody sees it.

Leahy: Oh, there’s James O’Keefe. Let me head from the hills. I don’t want to say something that he’s going to actually report. Now, is it true that James O’Keefe and Project Veritas have been banned by Google-owned YouTube?

Givas: It’s hard to tell. Sometimes it’s hard to tell them one from the other ones who I don’t blame you. We were kicked off Twitter as well as Jame’s personal account. I think, ridiculous reasons.

And firstly, the Project Veritas account was banned because they claimed we didn’t blur out a house number, even though a similar CNN video still stands today with an unblurred house number. And the reason they gave her banning James’s personal Twitter account was ridiculous.

They claimed he operated multiple accounts to magnify his reach, and he’s maintained this day that he’s never created fake accounts on that platform. I don’t think he has time. I’ve seen the man’s schedule. It’s not a possibility.

Leahy: He is a pretty busy guy, I’ll tell you that. That’s for sure.

Givas: It’s ridiculous. We were booted it seemingly because we released the tapes on CNN and they didn’t like the narrative and we were shut down. That’s our feeling on it. And that’s what we’re going to court for.

Leahy: What’s interesting about that, the CNN tapes, you got high level of a producer there admitting that this was just basically a Jeff Zucker vendetta to bring down President Donald Trump. That’s all it was. That’s all it is basically.

Givas: They called it propaganda and that’s frightening. And it’s not even the people a lot of people aren’t smart enough to understand this is going. It’s to see people on camera so calmly explained these things that shouldn’t be done so coldly.

Leahy: So what’s next for that Houston, Texas, television news reporter, Ivory Hecker? Is she currently employed? What’s her career look like?

Givas: Fox 26 is letting her go or in the process of severing her from Fox 26. Again, it was very confusing. They had asked her to turn in her equipment, but they were being very slow to kind of officially push the issue over the edge and cut her from the staff.

But she’s going to become an independent journalist no matter what happens here officially. At the end of the day, she wants to go and go chase on stories that don’t have to do with a corporate network.

Leahy: I have a message. Would you deliver a message to Ivory Hecker?

Givas: I’ll do my best. What do you have for her?

Leahy: Ivory, we’re hiring at the Star News Network, and we would love to talk to you.

Givas: Yeah, I don’t mind passing that message along.

Leahy: And by the way, my email address is simply michaelpatrickleahy@gmail.com. And maybe if you could stay after the break, you could give us some contact information to our producer Scooter so we can connect with Ivory. We would love to talk to her about working with the ever-expanding Star News Network.

Givas: I’m happy to do that. And I’m sure even if just to have the contact and touch base, she’d be interested to talk to you. So I’m more than happy to pass that on.

Leahy: Terrific. Nick Givas with Project Veritas. Thanks so much for joining us today.

Givas: Thank you so much for having me. It was a pleasure.