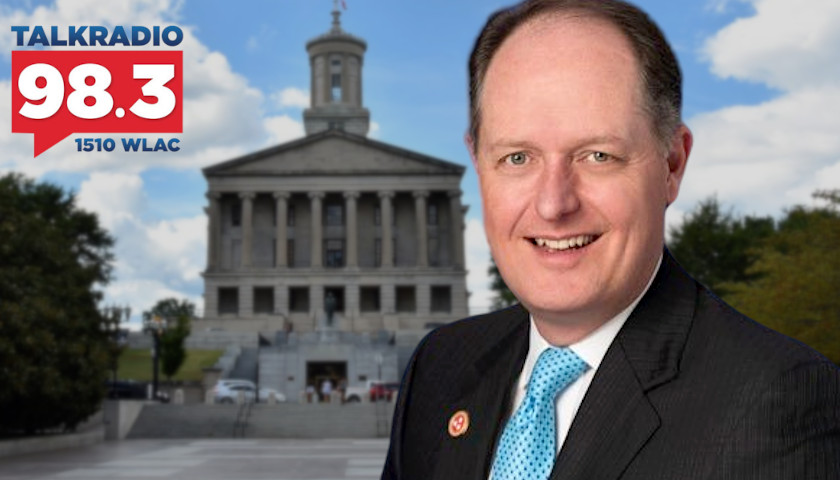 Live from Music Row Wednesday morning on The Tennessee Star Report with Michael Patrick Leahy – broadcast on Nashville’s Talk Radio 98.3 and 1510 WLAC weekdays from 5:00 a.m. to 8:00 a.m. –  host Leahy welcomed Tennessee Senate Majority Leader Jack Johnson to the newsmakers line to discuss the age-inappropriate wit and wisdom curriculum that has many people in the community angered. He also urged parents to get involved in local school board elections and oversight.

Johnson: Good morning Michael. Good to be back with you.

Leahy: Well, it’s great to have you on. Now we’ve got to tell all our listeners is in full disclosure. You and I are pretty good friends.

Johnson: We are! We are! For many years.

Leahy: For many years. So this is just a couple of friends talking about a public issue. But it’s interesting how this one came about. Yesterday, as you know, in addition to hosting The Tennessee Star Report radio program here on Talk Radio 98.3 and 1510 WLC, and owning and operating eight state-based news sites, including The Tennessee Star and the Star News Network, I write for Breitbart.

And I was very surprised yesterday when I saw a featured story at Breitbart News (Johnson chuckles) by my colleague Kyle Olson. And there was Jack Johnson. (Chuckles) It was a story about you, Jack.

And I sent this story to you right away. I said Jack, I didn’t know it was in the story. I said, Jack, I didn’t write this story or push it to anybody. And here it is. The headline. Tennessee Senate Majority Leader Fights Critical Race Theory in Own School District. So I sent you the text with that story, and I guess you’ve just seen it just a few minutes before.

Johnson: Yeah. Someone had sent it to me literally moments before you had as well. I wasn’t aware that it was going to be a national story in Breitbart. It was based off of an interview I had done with another news outlet here in Tennessee on the subject.

And I guess Breitbart picked it up. And by the way, I want to point out you’re a busy guy, you know that? You kind of rattled off all the things you’re involved with. You’re a busy guy. I can certainly relate to that.

Johnson: As are you. (Laughter)

Leahy: But of course, the other thing that’s great about you, Jack, is that you are a mean bass guitarist, right? You play with the Austin Brothers, and it’s always fun to go to a GOP event where you and your team are playing. It’s good music.

Johnson: We have a lot of fun with it. There was a time long ago when I tried to make money doing that. Luckily, that’s not an issue anymore. I just do it for fun.

Leahy: What’s interesting about this story, and I thought, Kyle, although he did not interview you, apparently for this story…

Leahy: It’s very interesting how he put the story together. He started off. He saw a piece in the Chattanooga Times Free Press, where you were talking about the wit and wisdom reading program.

But he added to that three other sources, the Williamson Herald, the Tennessee Lookout, which is kind of the far left, funded by the usual left-wing billionaire types. Our friend Holly McCall, who we are friendly with, although she’s ideologically on the far left is running that operation.

And then, of course, also The Tennessee Star. Let’s go to this wit and wisdom curriculum. What’s going on with that?

Johnson: This is a curriculum that was adopted by the Williamson County School Board recently within the last year or two. And as you know, Michael, with this national debate that’s taking place relative to Critical Race Theory, there is an extremely heightened awareness, I think, on the parts of parents and communities across the nation and certainly here in Williamson County, where I represent.

That is the case. And so I have seen a level of parental engagement and involvement with the school board on a myriad of things. But certainly, I think Critical Race Theory and the debate over that has driven this. And so this curriculum was discovered that is being used in Williamson County.

It’s been used in Davidson County as well. I’m not sure how broadly it’s being used across the state. And it’s problematic in that some would argue that it is an entree if you will. It has elements of Critical Race Theory in it.

Others would say it does not. I care about that. But I’m not going to go into that argument. I have reviewed the curriculum and it’s problematic just from an age appropriateness. This is a curriculum that is used for young kids at school as young as, say, second grade.

And it has some dark themes about some historical events that may be have taken place that might be fine for a junior or a senior in high school, but not for elementary age kids. That’s one aspect of it.

Leahy: We looked at that. We did a bunch of stories on this. Our ace reporter, Corinne Murdock, showed examples of the curriculum. And you’re absolutely right about not being age-appropriate.

They’re really painting a very, very negative picture of America’s history to second graders, second graders. That’s undeniable. It seems to me to be a judgment problem to include that in the curriculum for second graders.

Johnson: Agreed. And this is why it is so important. And I’m grateful, Michael. This is very reminiscent to me of the whole Common Core debate when Common Core was introduced and it was being pushed in schools in Tennessee and across the nation.

And parents got involved. They learned about Common Core and what it was. They got involved and it led to it being removed. And now we don’t use Common Core in Tennessee. And we passed legislation to guarantee that.

So it’s very similar to the debate and discussion we’ve had about Critical Race Theory. And now it’s transcending into this wit and wisdom curriculum, which is being used in some areas.

And I think that’s healthy. I think it is good the more people involved and the more parents are involved. And I’ve had so many people, Michael, that have come up to me and say, Jack, you know what?

Leahy: What’s interesting about this is we watch this and there’s a group of Williamson County parents called Moms for Liberty. I think it’s a national group, but there’s a very active Williamson County group and a friend of ours a man named Robin Steenman.

Steenman is one of the heads of that group. They’ve been very active in talking about the curriculum. Of course, I live in Williamson County, you represent me in the state Senate. And, of course, my children went to Williamson County schools.

But it seems to me that part of the problem is, and maybe you can talk about this in general, perhaps not specifically. Parents have concerns, and they go to the school board and the school board kind of responds to them like they are their children. Get it out of your system but we’re going to keep doing this. That’s what it seems like to me.

Johnson: Well, and that’s not an acceptable answer at any level of government. It’s certainly not acceptable. If a constituent or constituent group comes to talk to me about an issue at the state level, if it’s a city or a county issue, and certainly whenever it comes to our kids.

And I’ll preface this or digress for a moment here Michael. I’ve often said that I think one of the hardest elected positions in the world is to be on the school board. It is a very challenging job, and it’s one of the most important.

And it saddens me and I think you and I talked about voter engagement before. It saddens me. I’m very happy that there was a 70 to 75 percent voter turnout last November for the presidential election in Williamson County and a huge turnout across the state.

And the parents should make those decisions. We have an elected school board for a reason and that is so they can make appropriate decisions regarding public education that are right for our community.

I don’t think that’s appropriate. Educating a child in Memphis, Tennessee is going to be different than it is in Hancock County or Perry County. And so I believe in the local school board system. But that level of parental engagement as we’re seeing now is so critically important.