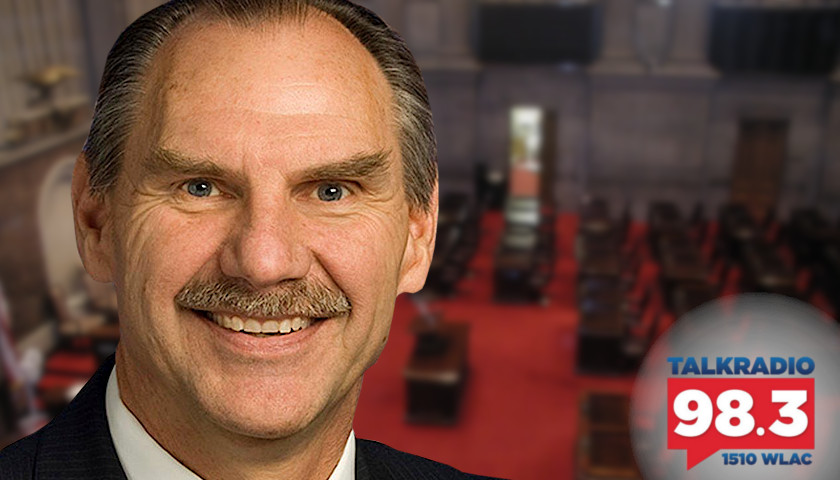 Leahy: We are joined in studio by our good friend, State Senator Mark Pody. Mark, the big question for you now with the legal but not legitimate Biden maladministration in power in Washington, it’s more obvious to those of us who love the Constitution in our country that the pushback has to come from states who have for a century allowed the federal government to usurp their powers. And that comes from the state legislatures.

And the states said anything that we’re not giving you as a federal government and the 10th Amendment says it remains with the state. It remains with the state. Including in the Constitution, it says the states are supposed to be the ones that set up how elections are done. Well, if we watch what’s happening in Washington, D.C. right now, they’re trying to set how elections are going to be done.

Pody: That’s exactly right. So the states have to stand up. We have to say that you are overstepping that power and authority, and we reject that. We literally would need to as states to reject it. Even the state legislators, they’re the ones that created the individual cities and counties. It wasn’t that the cities and counties in Tennessee form together to form the state.

The state said, we’re going to make these counties, and here are the authorities and boundaries that you have. And here are the rules that you got to abide by. It is the state legislatures that are actually the strongest entities. If we would use that bond together, we could step back against the overreaching federal government. And if we don’t, every single year, the federal government comes and they’re going to take a little bit more and more and more of our power and authority. And they do it by one thing.

They bribe us. They give us money and everybody’s afraid. Well, we’re going to lose federal funding. I can’t tell you how many times I hear that. Well, we’re going to lose federal money. I would wish that we don’t get any of this kind of federal money. Let’s do it on our own. I just don’t want to be responsible for that federal debt either. Do what we do as states and push back.

Leahy: Now, you brought up the topic of federal money. I’m going to throw you a curveball.

Leahy: Are you ready?

Pody: All right. This is going to be all about money.

Leahy: So here’s my theory. Here’s my idea. I’m trying to see if I could get members of the state legislature to consider this. And by the way, if you looked at the compliance costs of complying with all these stupid federal regulations, my guess is that they give the state 10 percent. But probably the compliance costs are about another four percent. So the net is maybe six percent. This is my theory. I haven’t investigated it yet. Here’s what I would really like to see.

I would like to see the Tennessee General Assembly pass a bill that says, you know feds, that 10 percent you give us, you can keep it. Take your 10 percent and keep it. And meanwhile, all your regulations, we don’t want to follow them and we’re not going to follow them. And I float this idea out and many state legislators kind of roll their eyes like that could never happen.

Pody: What do you think? I think it would be a terrific idea. I’m going to give you just a prime example. They were in committee and we were going to get $5 million literally, almost $6 million from the federal government. And in that bill, in that money they were going to give us, they said, you have to start now. This was to the Department of Health. They said you have to start using this name-brand condom. And it was going to cost us $80,000 more. And I went and I said, wait a minute.

Leahy: How does the federal government get to tell, where does this come in in terms of this particular brand?

Pody: I’m going to get you here.

Leahy: I mean, they purchased for the distribution of free condoms to the citizens of Tennessee.

Pody: And Tennessee was just using generic ones as well. You can’t use generic free condoms you have to use these name-brand condoms, even though it’s going to cost you $80,000 more.

Leahy: I didn’t know. Where is it said that it’s the role of the state government to distribute condoms?

Leahy: Apparently, they’ve been doing it with offbrand condoms

Pody: Yes. So federal funding was giving this. So the argument was Pody, do you want to get this $5 million? If you do, you have to accept that somebody, and I’m sure there has to be a contract somewhere, somebody with these name brand condoms in Congress. But they said, you have to use these condoms. So the question is, do we pay this extra $80,000 to get that $5 million? But there are so many incidents like that that when you’re trying to get so-called free money, it’s not free money.

Leahy: It’s always got strings on it.

Pody: It’s always got string. The same thing in the Department of Education, just exactly like you’re talking about Here’s the money and you have to use it exactly this way, that way. And in education, I’m going to tell you, no matter how much money we give, they’re going to always find ways to have needs for more. And it’s not up to us to do every single thing for every single person in Tennessee. That’s not government’s role. A government’s role is to protect our institution, individual rights, and freedoms and not to do for the people, the things that we’re supposed to do for ourselves.

Leahy: Now, one thing that I’ve noticed and I think this may be new to you that we started The Tennessee Star, the only conservative news outlet in all of Tennessee surprisingly four years ago. Been doing great. And we’ve been doing this show here to The Tennessee Star Report for about two and a half years. We’ve expanded to other states.

Leahy: Oh, okay. I was going to tell you, we just launched Florida. We’re going to launch Florida, April 21 St, The Florida Capital Star. And the reason we’re launching it seems to me the leader in the pushback movement against the federal government usurpations is Governor Ron DeSantis of Florida.

Leahy: That’s one of the reasons. And we’re told by the people down there that the legacy media is not getting him a fair shake. We believe that to be true. One of the bills that they’ve considered down in Florida has to do with pushing back against Big Tech censorship. There is a similar bill under consideration here. I wonder if you could give us an update on where that particular bill is? What are its components? And where does it stand?

Pody: Sure. And I will tell you that as legislators on the Senate side, the Republicans, we actually try and communicate with each other on a fairly regular basis. Just within Tennessee. So it’s not uncommon for us as Republican senators, just to be saying, hey, what’s going on and who’s carrying what? And so when this was heard that this was happening, Senator Mike Bell kind of texted and said, hey, I’m going to be interested in running this bill, and we all kind of said, okay, we don’t need 10 bills doing the same thing.

Pody: So we said, go ahead and you take care of that. So I’m not sure where Senator Bell’s bill is, but he is working on a bill, something like that for Big Tech.

Leahy: Okay, good, good. I’ll be curious to see that. And we’ll get Senator Bell in here in studio to talk a little bit about it in the near future. Speaking of which, the Tennessee General Assembly has another month or so to go?

Pody: We should be out by the end of April. I’ve been up here now for a while that I get to kind of see as committees are shutting down, and we’re going into final calendars and such the number of bills that we have are starting to be heard to get through. And almost all of my bills. I only got a couple left that I got to go through committees with, and we’ll be done. We’ll be just voting on the budget.

Leahy: You have a couple bills still in play?

Pody: I do. In fact, I had one bill that went to summer study yesterday, and it was a great bill. It was terrific.