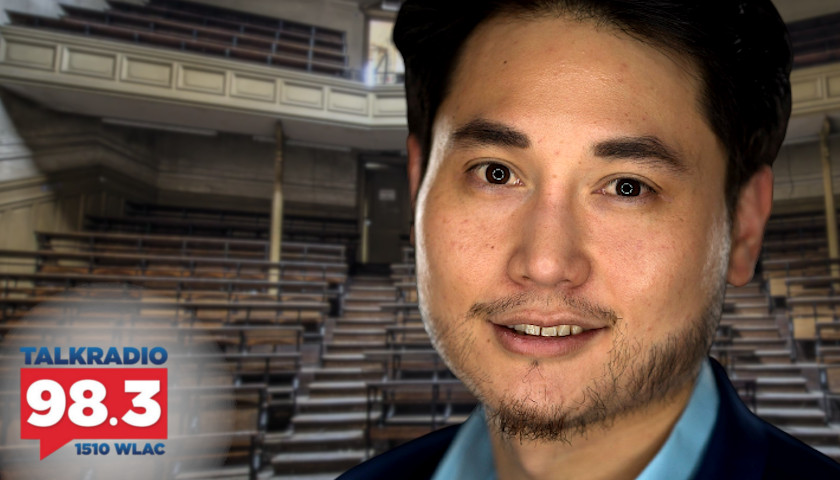 Live from Music Row Wednesday morning on The Tennessee Star Report with Michael Patrick Leahy – broadcast on Nashville’s Talk Radio 98.3 and 1510 WLAC weekdays from 5:00 a.m. to 8:00 a.m. –  host Leahy welcomed journalist and author Andy Ngo to explain why he was canceled from the upcoming Q Ideas – Culture Summit Christian conference in Nashville and how critical race theory is seeping into evangelical Christianity.

Leahy: We’re joined by our good friend Andy No, author of Unmasked. Welcome to the Airwaves in Nashville Andy.

Ngo: Thank you for having me on.

Leahy: Andy, you are welcome to talk and discuss your work here. You have brave journalistic work investigating Antifa, the left-wing group that engages in violence. You yourself were injured very seriously when you were covering some of their violent activity in Portland. We are delighted to have you on The Tennessee Star Report.

We believe in freedom of speech here. And what you have to say is very important. I was trying to unravel this crazy story from last week where a Christian conference here in Nashville canceled your appearance after a former speaker had said, well, I don’t like Andy. What happened there?

Ngo: Yeah. So I was really looking forward to speaking to this conference because even though I myself am not religious, I do find that Christian institutions and the church act as probably the most important bulwark against critical race theory and this neo-racism that you are seeing on the far left.

And so I was invited to speak about Antifa. The conference is meant to be about discussing different ideas and inviting people who may not be part of the evangelical community or church, but nonetheless have important things to say. I was supposed to be speaking with the conference founder, Gabe Lyons, and everything was set to go and was finalized.

And then last week I got just a very short email, letting me know that they were no longer moving forward with having me there. And I didn’t quite understand why until I saw the reporting that came out to the Religion News Service that a former speaker who is also a BLM activist and friends with the founder had reached out to Mr. Lyons to tell him to disinvite me.

Leahy: So this guy Jason “Propaganda” Petty just asserted that Andy Ngo is a bad guy, and that’s it no evidence, nothing other than that. That’s all we see here. Well, first, you’re a good guy. A. And B, you tell the truth. Why would a purportedly Christian conference and why would Gabe Lyons, whom I don’t know why would he bend to these false accusations against you and disinvite you?

Ngo: Well, your listeners are probably aware that many evangelical churches and even institutions like the Southern Baptist Convention have been slowly allowing critical race theory to creep insensibly under the guise of what looks like very noble racial justice. But the ideas, the theory behind critical race theories are not about equality or protecting equal rights and human rights.

It’s about giving in to grievance and hatred really. And I do think that this is (Inaudible talk) to Christian theology, and it’s unfortunate that many important Christian institutions in the West have been allowing us to come in. That’s the bigger picture and the bigger takeaway that I have for this. I wish the conference well.

It’s moving forward very soon anyway, I won’t be a part of it. But it’s unfortunate that the audience wasn’t able to hear what I have to say, given that we’re now in the past four days experiencing another round of extreme political street violence by BLM and Antifa in many American cities.

Ngo: I was invited for a virtual discussion.

Leahy: Okay, so it’s a virtual discussion. I’ve never heard of these guys. How did you get to get to know them?

Ngo: So they actually reach out to me. But if you Google them, they’ve been doing these yearly annual conferences all around the country. They usually host it. They’ve even done it in Portland, Oregon, of all places. At one point some of the past speakers have included, like now the former mayor of Portland. So they do include people on the left, center, and right. And they try to analyze the discussions through a Christian worldview. That’s been my understanding.

Leahy: Let me read to you a couple of comments from our story at The Tennessee Star about this group’s decision to cancel your appearance for no good reason other than one guy is a BLM activist who doesn’t like you for unspecified reasons. Here’s one comment, I’m going to read these three comments. This is what our readers had to say about that decision. ‘Stupidity also affects some Christians. And last time I checked, you can’t legislate stupid.’

That’s one comment. Okay. Another reader says “a healthy culture needs to hear a variety of ideas, but I will choose what variety of ideas you can hear. Does anyone see any hypocrisy in that statement? What is fascism?” That’s a second comment. Here’s a third. “Nothing more than leftist cancel culture masquerading as Christian. Funny thing, the record company of the quote Christian rapper mentioned here who got Ngo canceled is in Portland, Oregon. So who really is the con artist? Hint, it’s not Andy Ngo.” What do you make of our readers when they say that about this cancellation?

Ngo: It sounds like you have some good readers on your site. I appreciate that support. You know, I dug into the background of this BLM activist/rapper who used his personal connections to get me removed from the conference. I actually found out that he hosts a podcast with an Antifa activist that’s based in Portland named Robert Evans.

He’s very extreme and radical. And their podcast is extremely anti-police. And they are pushing the Antifa lie that policing today is the same as essentially slave patrols in the past where law enforcement historically in the South were used to return slaves to the masters. Therefore, the institutions today need to be destroyed.

That’s what their podcast is about. I mean, this particular activist/rapper has his own personal grievance against me. I had never heard of them. And I would have appreciated an opportunity to explain my side of things to the organizers. But again, it’s not really about me. This is just one speaking opportunity. I think it’s emblematic of a larger trend we’re seeing in the evangelical Christian churches in America.

Leahy: Are you still based in Portland, or where are you based now, Andy?

Ngo: So last year, I had to leave Portland because it was extremely unsafe for me with all these frequent death threats coming in, violence in the city, and the shrinking police department because of the defunding of the Portland police after George Floyd’s death. And we’re seeing now weekly riots continue as they have for months on end.

They are escalating into really bad attacks. Just over the weekend Antifa gathered outside the local ICE facility and barricaded the front to lock the officers inside and then started it on fire. And then on Monday night, they set fire at a Portland police station. And then last night, they set the police union hall on fire.

So we’re having riot after riot. It’s not just Portland. We’re having riots in Seattle, and, of course, near Minneapolis because of the shooting death that happened a few days ago. It’s like I wrote in Unmasked and even my writings before then have always been a warning to the public and to politicians that this is what’s coming.

And these are the lessons we can learn from mistakes not just from 2020 but even going back to 2016. How do these far-left extremist groups in a way where they can systematically chip away at the rule of law and get the police department defunded and ruin morale, and then carry out acts of violence with impunity?