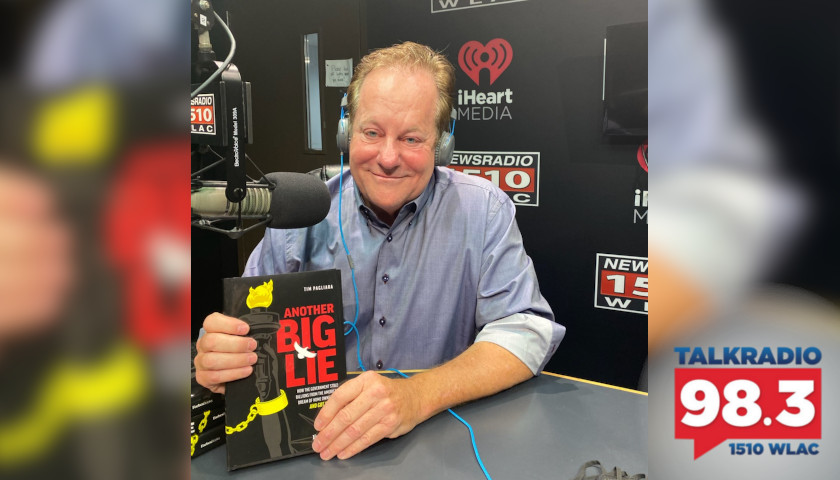 Live from Music Row Tuesday morning on The Tennessee Star Report with Michael Patrick Leahy – broadcast on Nashville’s Talk Radio 98.3 and 1510 WLAC weekdays from 5:00 a.m. to 8:00 a.m. –  host Leahy welcomed author and financial advisor Tim Pagliara to the studio to discuss his book and the conservatorship of Fannie Mae and Freddie Mac and two looming lawsuits.

Leahy: Tim Pagliara author of a great new book, Another Big Lie: How the Government Stole Billions from the American Dream of Homeownership and Got Caught. So this is all related to him to the 2008 financial crisis and a lawsuit stemming from that. Give us the story.

Pagliara: Lots of lawsuits. So the Fannie Mae and Freddie Mac were put in conservatorship like a lot of banks.

Leahy: Okay, we remember that was the big campaign going on there, McCain versus Obama. End of September big joint conference. And they declared a financial crisis, and we’re going to do a whole bunch of different things to try and stop it.

Pagliara: And as I outlined in detail in my book, they never should have been put into conservatorship. Conservatorship holds an asset for someone else. In this case, it was the shareholders. They were supposed to work with them, build capital, make them stronger, and get them out of conservatorship. 12 years later, that’s still not the case.

Leahy: Let’s just set the stage here. So part of the actions taken by President George W. Bush then…

Leahy: Was to put Fannie and Freddie Mac into conservativeship as of September of 2008. Wrong choice.

Pagliara: That’s right. And so they had constraints on the budget. Fannie Mae and Freddie Mac were two of and still remain two of the most profitable companies in the world. And so they had written down all these assets. And in 2012, a plan hatched by Jack Lew, Tim Geithner and the rest of the Obama Treasury.

Leahy: Did they get away with that?

Pagliara: Well, so far, they have. They filed a false affidavit in federal court. They said that Fannie and Freddie were in a death spiral. And so they justified taking 100 percent of the earnings and profits of these two corporations in perpetuity.

Leahy: And where did those profits go?

Pagliara: They went to the United States Treasury.

Leahy: To prop up a budget that was out of control. Am I right?

Pagliara: That’s exactly right. And it was non-budgetary revenue. It was very controversial at the time. President Obama needed money for the cost-sharing reimbursements of the Affordable Care Act. And he had this non-budget revenue. So he was able to direct it to different places he wanted outside of the appropriations process of Congress. And that’s where everything started going wrong.

Leahy: Let’s just stop. When you say, outside the appropriations process of Congress. I was listening to Newt Gingrich the other day, former Speaker of the House and he says, look, we don’t have an appropriation process or even a legislative process in America today. That was what was intended by the founders when they put this together.

Pagliara: Madison Federalist 51. If men were angels, we wouldn’t need government because they’re not. What kind of government do we need? And Congress has always attempted to create this fourth branch of government where they get outside of the legislative and the executive and judicial review.

Leahy: So tell us about the lawsuit that has been involved here. The major one, what are the details of that and what your books about?

Pagliara: There are two different lawsuits. One is in the U.S. Court of Claims. It’s a taking case. That’s where every case goes where you’re alleging and unconstitutional, taking property, and access to $10,000. The second group of lawsuits are in federal court. And there are various different circuits in the federal court system. The one that was heard in December’s oral argument, Collins versus Yellen now. It was Collins versus Mnunchin. They substitute the new Treasury Secretary because they are suing the United States Treasury.

Leahy: Who was Collins?

Pagliara: Collins was just an individual investor that felt like the government stole his money, violated the terms of the conservatorship by taking 100 percent of the earnings and profits in perpetuity.

Leahy: His money was what invested in Fannie Mae?

Leahy: Okay, so he put x amount of money into Fannie Mae and Freddie Mac.

Pagliara: And he got a little upset because the government took it all.

Leahy: Took it all.

Pagliara: 100 percent. And backtracking where I said, after they concocted this scheme to take 100 percent of the earnings and profits, they declared in front of a federal judge, they lied to a federal judge, and they said, these companies are in a death spiral.

Leahy: When you say they lied. Who lied and when?

Pagliara: The Treasury. Mario Yulette, who was your Treasury official. He filed a false affidavit, and Judge Lamberth’s Court in the D.C. Circuit said they were in a death spiral. And then we found out when we were finally able to take depositions, the chief financial officer of Fannie Mae, had just briefed them that they were entering a golden age of profitability.

And so by three months later, they had to delay their financials. In the first quarter of 2013, they had wrote up assets and paid the largest single dividend to the United States Treasury in the history of the country. It was so large that Jack Lew sent a letter to John Boehner and said, hey, we’re going to delay the budget crisis a little bit. We just found $60 billion. And they paid $60 billion to the government.

Leahy: And it’s still in conservatorship.

Pagliara: And it was still in conservatorship.

Leahy: Today it is still in conservatorship.

Pagliara: And since then, they have paid back over $350 billion to the United States Treasury.

Leahy: So let me ask you this. So the investors, the people who had invested in Fannie Mae AND Freddie Mac, That’s where their investment was?

Pagliara: That’s where their investment was and still is.

Leahy: If they win this lawsuit, are they going to get a lot of money?

Pagliara: The companies are going to declare the money that the government advanced them paid at 10 percent interest. Even the interest rate was high. Declare paid and they’ll go back to the capital markets and they’ll recapitalize and release. They’ve changed their regulations for all financial institutions. They have to hold more capital than they did prior to the financial crisis.

There are a lot of things that have changed. But in 12 years, Fannie Mae and Freddie Mac are even better into these than they were to serve the American homeowner. Their mortgages. They buy mortgages of less than $512,000. So the average Fanny Mae mortgage is $250,000.  I mean, there are people that pay that much for cars now. So they serve Middle America. They serve first-time home buyers. They are indispensable in our financial system. They fill a hole that no one else has been able to fill.

Leahy: Now, first question, the book that you sent to the Supreme Court justices, do you think they’ll read the book?

Pagliara: I don’t know. (Leahy laughs) But if one of them picks it up and starts to read it will be fun. They don’t need my book to obviously to render a decision that’s in front of them. And it was a cheeky move. But the solicitor general, it’s just typical.

Pagliara: No, it was a cheeky move by the solicitor general to send a letter and mislead the court. Totally inappropriate while the judges are in deliberation. They’re in the actual deliberation phase of the process that they go through following oral argument and we expect an opinion by May first. Sometime in May.

Leahy: So the oral argument has already been made.

Pagliara: It’s already been made. The fascinating point, though, about that, especially for a conservative radio talk show host. The most liberal members of the court, led by Justice Breyer, gave the government the hardest time in oral argument. They said, you nationalized these companies, and lawyers for the government said no, I didn’t. Yes, you did. You did it nationally. He said it three different times.

Leahy: Okay, so now my head is spinning, right? Now Briar was pressing about these oral arguments heard in December? So we had Amy Coney Barrett. We had Kavanaugh, Gorsuch, the three Trump appointees. Did they ask any decent questions?

Pagliara: They did, but they kind of got drowned out by the Liberal members of the court.

Pagliara: They were on it. Gorsuch threw his hands up there, and he said, oh, my gosh, this is a heavy lift. I mean, this is a $350 billion theft.