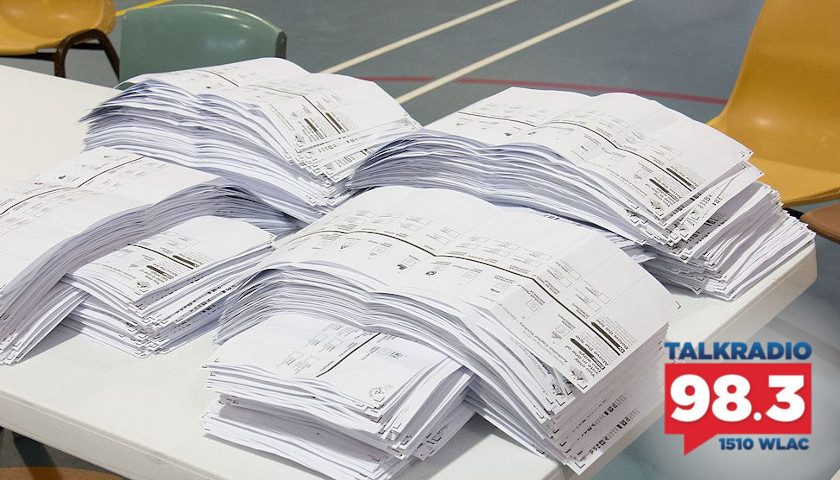 Leahy: Crom, we have some breaking news from the Star News Network. As you know, we own and operate eight state-based news sites including The Tennessee Star. One of them is The Georgia Star News.

The Georgia Star News has been requesting in open records request information from Fulton County, which is the big County down there in Georgia, that had all sorts of election problems in 2020.

I’m just going to read this request that we sent to Fulton County officials on June 20 and then I’m going to read you the official response we got back from them about 15 minutes ago.

And I’d like to get your reaction. The setup is a little bit long but just hang with me here. We wrote to the Fulton County officials on June 20th.

Georgia Public Broadcasting report Wednesday, June 16, 2021. “After GPB News asked Fulton County on Monday about the forms not included in The Georgia Star New’s request for records, election staff located all about eight of the more than 1,500 forms. Provided them to Georgia Public Broadcasting on a flash drive.” The Georgia Star News requests your response to the following request.

B, an explanation as to why the previously ‘missing absentee ballot dropbox transfer forms were provided to Georgia Public Broadcasting within 48 hours of the request, but not to The Georgia Star News despite the incomplete responses to our three open records request dating back to December of 2020. That sounds like a reasonable request doesn’t it?

Leahy: Remember, we reported that Fulton County was missing 24 percent of the critical chain of custody documents documenting absentee ballots, which represented about 18,901 absentee ballots cast in the presidential election in a state where the margin of victory for Biden was less than 12,000 votes.

Okay, so here is a response. We just got this about 15 minutes ago from the open records custodian for Fulton County by the name of Steve Rosenberg.

I’m gonna read this exactly to you. And then you tell me what you think this means.

“The records you seek have been transferred to the clerk of court and are currently being held under seal. They are therefore exempt from public disclosure pursuant to Georgia Law 21-2-500 A-C.”

Carmichael: So let me be sure I understand what you’re saying. You’re saying that the documents that have been placed under seal that was not delivered to The Georgia Star News were previously delivered to the Georgia Public Broadcasting?

Leahy: That’s what Georgia Public Broadcasting claims. And they’ve published those documents. They claim they got them from Fulton County.

Fulton County is now three weeks later telling us we can’t get those same documents because they’ve been transferred to the clerk of court and are currently under seal.

Carmichael: Well, as you and I have been discussing, there are six cities in the country where the way that the votes were collected and how they were counted is suspicious.

Leahy: Atlanta is one of them. Detroit, Milwaukee, Philadelphia.

Carmichael: In other words, not normal. And in every one of those cases, the officials up there have fought disclosure. So you have to just ask, what are they trying to hide?

Obviously, it is important if half the population is concerned that the presidential election was stolen. But for those on the left who say that those who are concerned about that shouldn’t be.

I just merely point to the mayor’s race in New York City, which was 100 percent, Democrat, because it’s the Democrat primary. And three of the candidates up there are suing because they said the election up there was irregular.

To claim that Republicans have no right to question the results of elections where there are facts that are known. For example, all six of those cities stop counting votes at the same time.

For hours they didn’t count or they claimed they weren’t counting. And then when they opened back up to count again, then they went from there.

And we have no idea what happened during the hours that those places were shut down and where the people who would have been on the Republican side observing were thrown out of the room.

And that happened in those six cities. So there are issues that should be addressed. One good thing is that the legislature of Arizona and the governor have passed laws that will fix a lot of their problems.

And Georgia has done the same thing. I think other states are still in the process of passing laws to fix the irregularities in the election.

Voter ID is required to do virtually anything that matters. And voting is one of those things that “matters.” To ask people to identify themselves and to be sure that they are who they say they are is a very reasonable thing to do for those who want honest elections. Fulton County is clearly trying to cover something up.

Leahy: They’re covering something up because let’s just reiterate what they’ve done. We had a story on June 14 written by Laura Baigert that said, we have not received the required chain of custody documents to track the movement of absentee ballots deposited in drop boxes in Fulton County.

We are missing 385 out of 1,500 of those transfer forms that Fulton County is supposed to have. That’s 24 percent that no chain of custody document for 24 percent of the absentee ballots placed in drop boxes.

Now, here we are today on July the seventh and Fulton County still has not produced those chain of custody documents, although purportedly Georgia Public Broadcasting claims that they receive those and published those documents on June 16. Fulton isn’t giving those documents to us. Why is that Crom?

Carmichael: It seems to me to be obvious that there’s something untoward and that the Fulton County officials don’t want to provide. Michael, you guys follow this very closely.

Leahy: Yes. We relentlessly track this.

Carmichael: Has the Georgia law been changed so that the issues that you are trying to learn more about will be much more difficult?

In other words, drop boxes that are sent there by private citizens, they’re not going to be allowed. Is that correct?

Leahy: No, they will be allowed. There were 300 authorized not by the state legislature, so not legally authorized but authorized in 2020 by this election code rule of the state election board.

The legislature has ruled that, yes, they will allow a much lesser number of drop boxes, but they can be only located right next to voting centers.

They can’t be out all over the community, which is part of the problem. So we’ll address it partially. But I am very, very troubled here.

If Georgia Public Broadcasting is telling the truth, then records that Fulton County allegedly gave them on June 16 have subsequently been transferred to the clerk of court and are being held under seal and not being transferred to us.

Carmichael: Somebody does not seem to be being honest. Somebody is not acting in an honest way. Let’s put it that way.

Leahy: You are the king of understanding. (Laughter) I agree. This is breaking news everybody. And I think this is central to the issue of credibility of our elections here and why I call the Biden administration legal, but not legitimate.