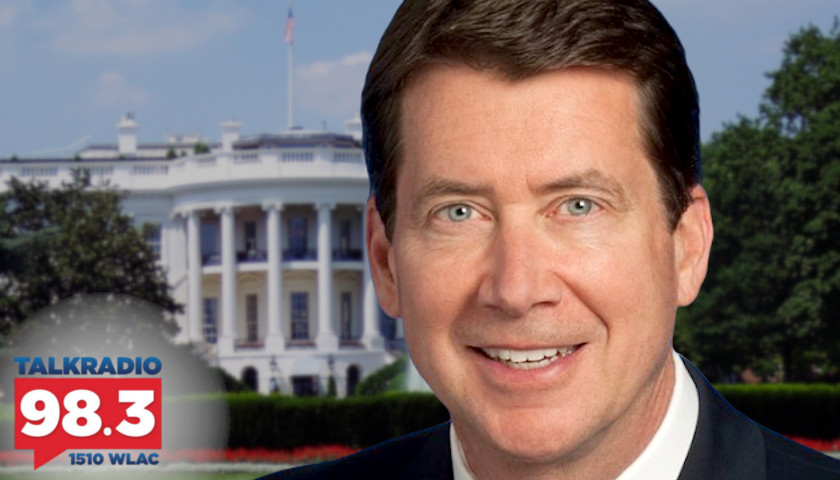 Leahy: We are joined on our newsmaker line by our friend, the United States junior senator from Tennessee, Bill Hagerty. Good morning, Senator Hagerty.

Hagerty: Good morning. Great to be back with you.

Leahy: Senator Hagerty, China is on my mind this morning, and I’m thinking it’s on your mind as well. What’s going on with China? You’ve been making some news in that area of late.

Hagerty: China persists in its malign behavior all around the world. And if you think about what we’re dealing with now in any aspect of the news, whether it’s the coronavirus pandemic that they unquestionably unleashed on the planet, their reluctance to do anything, to cooperate, to help us deal with that.

Their actions in the Taiwan Strait, which threaten yet another free nation and one of our allies, where we are spending a great deal of time and effort right now. Certainly in my office contemplating our approach and our push back on that.

To what they’re doing in the realm of military diplomacy and every other aspect of global life to try to undercut and project themselves and very often at the expense of America.

Leahy: You were quoted in a story yesterday at CNBC. This is an area of great interest to me, and I learned something about your position in the Senate, where you are influential. You are a member of the Banking Committee, which is a very influential committee.

Here’s the headline of the story. SEC Officials Says US Listed Chinese Companies Must Disclose Government Interference Risk. And your quote on that topic was, I think on point. You said, “U.S. regulators must ensure that American investors and workers are protected from the sort of non-market behavior that is leaving American investors.” That’s what you said.

Leahy: You said it on the Senate banking committee. How are the Chinese companies that are listed on American stock exchanges engaging in nonmarket behavior?

Hagerty: Several days ago, I made those remarks because I witnessed what happened with the listing of the major ride-hailing company. It’s a copycat of Uber here in America. It’s called DiDi. And they came and use the New York Stock Exchange to list their company.

I’ve spent a lot of time and a big portion of my life in the financial markets – a servant on the board of directors of New York Stock Exchange-listed companies. I know the rules. DiDi lists here in America raise billions of dollars.

And just a couple of days later, the Chinese Communist Party basically pulled down their data, pulls their app offline, and destroys the business model. This is after they’ve collected again billions of dollars of American investors’ hard-earned money.

Leahy: Where did that money go?

Leahy: How do we let that happen?

Hagerty: We allowed them to list. And again, I put a lot of pressure on the SEC. You cannot allow these Chinese companies to list and not follow precisely the same set of rules. The companies that I’ve worked with, that I’ve sat on the boards on, and that I’ve invested in – that you invest in, American companies have followed the rules.

If we had an American company that didn’t list a major risk like this, they would be delisted.

Instead, we had this happen with the Chinese company and we’ve got to step up. No more looking the other way. The Biden administration seems too often willing to appease and not step up and stand up for the rights of Americans.

Leahy: What sort of concrete, specific actions can be undertaken by the United States government to make sure that these kinds of market irregularities, this disruption, this perversion of our American financial markets by the Chinese, to their benefit, don’t occur again?

Hagerty: We need to make certain that they fully comply with all of the accounting standards that American companies have to comply with.

I think it’s a shock to many American investors to learn that Chinese companies have been given waivers on the American stock exchanges when they don’t comply with the same sort of accounting requirements, the same accounting standards that we do. That’s got to come to an end.

Leahy: But didn’t the Biden administration just double down on granting those waivers? Or do I have that wrong?

Hagerty: They have got to come back and look at the law and enforce it as written. And they’re not doing this time and time again. They’re looking the other way. They’re not enforcing the laws that are on the books against companies that don’t and countries –

And certainly, the Chinese Communist Party doesn’t have our best interests at heart. Yet they’re willing to double down on American companies all day long. We are the enemy. The economy here in America is under attack on a daily basis by the Biden administration.

Yet, if you look at their appeasement around the world and it’s not just China, they’re trying to appease Iran. They killed the Keystone XL pipeline. What a gift to China and Iran. They are collapsing our southern border. That’s a gift to the cartels down in Mexico.

And Vladimir Putin is laughing all the way to the bank now that they granted him a license to go ahead and complete Nord Stream too. Again, great for the old business over there in Russia while they’re trying to kill the old gas business here in America.

Leahy: There’s a principle of philosophy called Ockham’s razor and that is basically the most likely explanation for an occurrence – is probably the correct one. So I look at this, Senator Hagerty and I look at the Biden Justice Department refusing to prosecute a couple of Chinese spies and military members who lied about their resumes to get influential jobs with American universities.

They’ve decided they’re not going to prosecute them. To me that says this is an example of how compromised Joe Biden and the Biden administration are on the issue of China. What have I got wrong there?

Hagerty: I think you’ve got it right. And if you think about the close financial ties that the Biden family has with China. We don’t have to go back very far to remember who the big guy is and Hunter’s activities in China bringing – what was it?

A billion and a half dollars back from a trip that Hunter took when his father was the vice president. There is obviously something going on here, and we’ve got to continue to press to get to the bottom of it.

Leahy: What are the odds that an anonymous Chinese Communist Party member is going to spend half a million dollars to buy the supposed artwork of Joe Biden’s son, Hunter Biden? (Chuckles)

Hagerty: This is yet another example of the Biden regime and the Biden family operation cashing in on the father’s position. And this is wholly un-American and something I think the world should be very concerned about.

I should say America should be very concerned about it. The world is looking at this and perhaps a low-cost entry point to influence here in America. And it’s un-American as it can be.

Leahy: You’ve got a very busy schedule yourself, and we really appreciate you coming to the program to tell us what you’re up to. What are your priorities for the next week? What are some of the most important things you’ll be doing?

Hagerty: We are trying to make it clear to the public the inflationary implications of what Biden and the Democrats are talking about with this massive spending spree that they have in the tank. They’re saying it’s a $3.5 trillion package to go alongside this  “bipartisan” infrastructure deal.

All the projections that I’ve seen say that the $3.5 trillion partisan package, and again, they’re planning to pass this on a 50 vote margin in the Senate. We have a 50/50 Senate and the only way they can break the ties is by bringing the vice president to do it.

That’s their plan. The $3.5 trillion actually maps out to be more than $5 trillion. This is at a time when inflation has taken off. If you look at the numbers between May and June of this year and you annualize the inflation just between those last two months, it annualizes to a 12 percent annual inflation rate. The target for the Fed is two percent.

They’ve talked about maybe slightly overshooting that. This isn’t a slight overshoot. This is a massive overshoot. And we’ve got to step back and say, do we want to introduce this type of inflation throughout the economy?

Those of us that are old enough to remember the Jimmy Carter years know where this will lead. And we are pushing back as hard as we possibly can on this.

Leahy: Here’s a question for you. The Senate Majority Leader Chuck Schumer asked for advice from the parliamentarian on the capability of using reconciliation to jam through all sorts of bills – illegal immigration, et cetera – under the guise of reconciliation.

The parliamentarian said, well, maybe once you can do it, maybe twice. Do you think the parliamentarian is going to rule on these attempts that will constrain the use of reconciliation? Or will it be a free for all?

Hagerty: We’ll see what they put in. But my guess is that even though Chuck Schumer may know things will not pass the test to be included in this reconciliation bill. And again, I want to clarify the word reconciliation.

What you would think and what I would think is reconciliation is some sort of coming together, some meeting of minds to address or fix something. This is not reconciliation. This is a 100-percent partisan, reckless spending spree that they’re on. Will they use this process to message, will they put things in that won’t fit and rely on the parliamentarian to take them out? I wouldn’t put it past them at all.

They’ll probably use anything that the parliamentarian takes out yet again as their argument to do away with the filibuster and turn this Senate process that over the years has been historically a bipartisan organization into something that is completely partisan again. And if they destroy the filibuster they’ll be able to fulfill the rest of their socialist wishlist.

Leahy: Senator Bill Hagerty, thanks so much for taking the time out of your busy schedule to talk to our listeners here. I really appreciate it. I hope you have a great week. Thanks for joining us.

Hagerty: Thank you. Good to be with you.