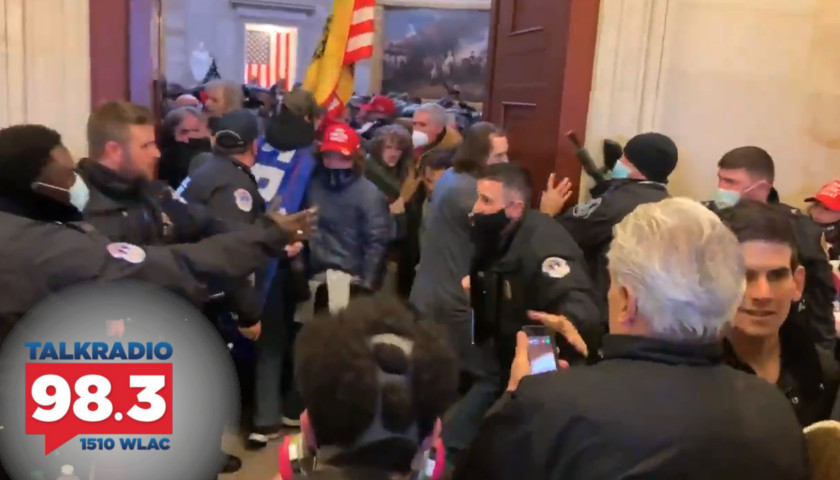 Live from Music Row Friday morning on The Tennessee Star Report with Michael Patrick Leahy – broadcast on Nashville’s Talk Radio 98.3 and 1510 WLAC weekdays from 5:00 a.m. to 8:00 a.m. –  host Leahy welcomed the original all-star panelist Crom Carmichael to the studio who discussed how it was the Democrats that benefited from the breach of the U.S. Capitol on Wednesday afternoon.

Leahy: We are joined as we almost always are on Wednesdays by our good friend the original all-star panelist Crom Carmichael. Crom, good morning,

Leahy: It’s a little snowy out there this morning. Did you have a safe ride in the snow?

Carmichael: Well the snow had stopped. You saw something I didn’t.

Leahy: Well, Crom I’ve been talking all morning about this. And I want to set it up by saying the event on Wednesday when the peaceful Trump rally on the mall transformed into something that wasn’t peaceful when rioters breached the Capitol rioters. Rioters, it turns out, and possibly some Antifa, possibly some Trump supporters. But nonetheless, the rule of law was broken.

Carmichael: Well, I don’t know if I agree or disagree on the moral high ground issue because I think that there were some Trump supporters who are in the building. I think there were some Antifa people who were instigators of the violence first with the police and then and then the breaching of the building. The Capitol Hill police were strangely and completely unprepared.

And so there’s a lot in history that is staged. I think this past election, there’s a great deal that we staged. And so do I think there were some people who were in the building? Yeah. Do I think they’re running around kind of having a great time? Yeah. Did they maybe break a couple of chairs and sit in speaker Pelosi’s chair? Yes.

Leahy: I’ve actually seen some reports that the person sitting in Pelosi’s chair was an Antifa person. I’ve seen those reports. I don’t know whether it’s true or not.

Carmichael: Well at some point that may or may not become a factor or not. I don’t know. But but but the bottom line is that the Democrats benefited from what happened.

Leahy: A crisis Crom is a terrible thing to waste.

Carmichael: Yeah. When you create the crisis. That’s part of it.

Carmichael: And so and you know, and then the media called it just ignored what’s happening in the past. Now, I’m not saying all this in complaining because we’re at a point now where I learned yesterday at lunch where the term gaslighting came from. Do you know where it came from?

Leahy: I don’t I’d love to be enlightened.

Carmichael: There was a movie back in the I think in the 30s or 40s. An old movie where the husband wanted his wife to think she was crazy.

Carmichael: Okay. And so what he did was he would do things that were slight and imperceptible. And so then when she would comment on them he would say well that’s not happening. And so and so in other words, it’s one of those things where are you going to believe me or believe your lying eyes.

Carmichael: So that’s what’s going on now in this country. I would also recommend to our listeners, my daughter recommended to me that I watch a documentary that’s on Netflix called The Social Dilemma. And it is a documentary with interviews of people with a little bit of drama in it. When I say drama I don’t mean drama in the sense of drama but how it’s done.  And that is how social media companies manipulate people’s thinking.

Carmichael: And that they didn’t intend to do that when they started but now they’re being paid to do it. And these are people who used to work for these companies who have quit because of the ethical problems that they see.

Leahy: There is a professor at Harvard Robert Epstein I think his name is, who’s made that argument for like 10 years and said that Google for instance would be able to change like 5 or 10 million votes using those techniques.

Carmichael: Well, but I’m not talking about votes. I’m talking about thinking. It’s much bigger than voting. And so so I would encourage our listeners to watch it.

Leahy: It’s on Netflix. The Social Dilemma. I’m going to watch it.

Carmichael: Yeah, The Social Network I think was the movie about Zuckerberg and Facebook. But this is The Social Dilemma and it’s well worth watching because we are observing it in real-time. Then you move forward and it didn’t take very long after the Capitol was breached for them to move back into session go ahead and finish what they would have done anyway. And what Hawley was doing and what Ted Cruz was doing would not have changed the results.

Leahy: I use the term Crom, that process, I agree with you on that. I use the term almost akin to a kangaroo court in terms of the way they were looking at the evidence.

Leahy: I will make one little correction on that. The state legislators actually didn’t do that.

Carmichael: Well, whoever did it the envelopes got to Pence. He was going to open them. Nothing in Washington was going to change what was in those envelopes.

Carmichael: Okay. So if nothing was going to change it, that doesn’t mean that what Hawley and Ted Cruz and the Republican House members when they objected to it and what they were intending to do was shine a light on the election fraud.

Leahy: And they said that. They were saying we don’t expect this will change the outcome. We just want to have the information out there.

Carmichael: And that’s all valid. All I’m saying is for people who thought that once the envelopes were in the Senate that what was in the envelopes was going to be changed by people in Washington, as much as I would like for it to be changed that wasn’t going to happen. So what did happen is because of the breach so-called of the Capitol, all of the House and Senate went to someplace safe. And then after the danger part was over they then raced back and finished their work literally in the middle of the night.

Leahy: Literally. And nobody was paying attention.

Carmichael: Nobody was paying attention.

Leahy: Because it was all about what happened from the breach.

Carmichael: Right. And so then they moved quickly to the next day invoking the 25th Amendment.

Leahy: Well, there were calls for the invoking of the 25th amendment by Democrats but not from the joint session.

Carmichael: No. But the calls were from the leadership of the Democrat Party. From Pelosi and Schumer.

Leahy: Shockingly Crom, we have a story at The Tennessee Star. I know this will shock you. Steve Cohen and Congressman Cooper here have called for invoking the 25th amendment.

Carmichael: Okay. So at any rate. So that is now happening. Then you have to ask yourself, why would a party that claims over and over again with a leader now president-elect Biden. Now president-elect saying that we need to heal and come together? Why would they immediately call for the removal of President Trump?

Carmichael: Here’s what is interesting. I have some friends of mine who are Republicans. They have been supportive of what I would call the institutional Republican Party for years. I have no idea what they think of Ronald Reagan because I’ve never asked them because that’s a long time ago.

Leahy: A long time ago.

Carmichael: But to a person, they are very upset with Trump and have been ever since he’s been the president. And when I asked him why it’s always about his behavior.

Leahy: Yes. Okay, not his policies, his behavior.

Carmichael: Yes. But they can’t get past his behavior and discuss his policies. The Democrats on the other hand are exactly, as far as my friends are concerned, about exactly the opposite.