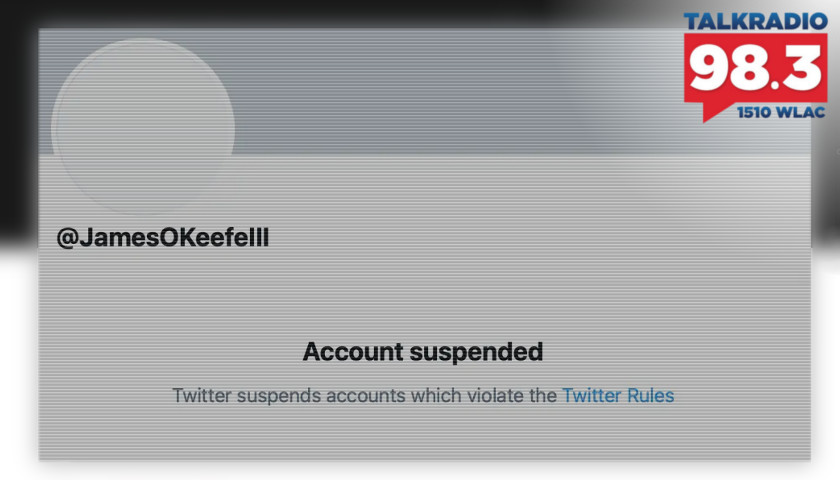 Leahy: We are joined on our newsmaker lined by Nick Givas, the Managing Editor of Project Veritas. Nick, welcome to The Tennessee Star Report.

Givas: All right. Thanks for having me.

Leahy: So James O’Keefe has been banned from Twitter one day after your stunning expose of the technical director of CNN who basically said what everybody knew that they were trying to defeat Donald Trump. Will James O’Keefe be suing Twitter and CNN, as some reports say?

Leahy: Now, James O’Keefe’s and the Project Veritas Twitter account had what, one and a half million followers?

Givas: The Veritas account may have. That was suspended before my time in joining the group. But James’s personal account was close to a million followers and was over 900,000.

Givas: I can only speculate into the mind of what Jack Dorsey is thinking. I do not know. But I can say that for the grace of God and for your listeners because eventually, I believe it seems we’re on a slope or it’s not just conservatives that are going to get banned it’s anyone that gets in the way of a narrative that gets in the way that Twitter doesn’t like. you don’t have to be conservative. It could be anyone.

Carmichael: Naomi Wolf certainly is not a conservative and she was banned from Twitter.

Leahy: Yes. She has been.

Carmichael: Now, quick question. You said that you think you’re going to also in addition to suing Twitter sue CNN. What is the basis? I know that you all have exposed CNN.

Givas: Defamatory statements are the basis and I’ll leave it at that.

Carmichael: Okay, so CNN has made statements that you all believe are defamatory. And is that prior to or after your recent exposure of CNN’s deception?

Givas: I can only say stay tuned. (Leahy laughs)

Leahy: This is a wise man. There is litigation going on.

Carmichael: Well, you have many people in your corner on your ongoing litigation. So anyway, good luck to you.

Givas: Thank you, sir. We try for the truth. That’s all we want.

Leahy: The claim by Twitter was that James O’Keefe was using fake Twitter accounts. Is that true, or did they just make that up?

Givas: He tells me no and I’ve seen and experienced nothing like that. I’ve never seen James keep or operate a false account. He says he’s never done that. I wouldn’t be surprised if it was just a reason to throw him off. But again, we’re trying to figure that out. And the answer we were given was very broad and it seemed very random all of a sudden.

As I said, I’ll leave it to the American people. l’ll leave it to them to decide why this happened and the timing. But yes, we’ve come out with three bombshells videos showing a CNN technical director bragging about how the network is propaganda, how it manipulates people, and how it was basically shilling for Black Lives Matter. And then all of a sudden he gets banned.

Carmichael: I found what you all got them to talk about with them exaggerating the numbers on COVID.

Givas: That too. And then saying they’re going to pivot from COVID, and this is Charlie Chester, a technical producer there, claiming the network knew that people are tired of COVID and now they’re going to switch to climate change as if it’s Wheel of Fortune or some game show for them.

Carmichael: For them it is.

Givas: At least Charlie Chester, this director, and his claims that the culture is such. Let’s find out. Let’s see if anyone else is there that wants to come forward and they can send any information to Veritastips@protonmail.com. And if it isn’t just him, more people will come forward. They will and it isn’t the first time.

Givas: Without getting into too much detail I can say that I work with production on videos sometimes. What we’re going to keep and what we’re going to actually publish. Sometimes we get information that might be borderline that we have to decide as a team, are we going to publish this? Is it newsworthy? Is it true?

A part of that includes traveling on the road. Part of it includes talking to find people like yourself and just giving interviews. But people know where we are at as much as we can tell without blowing the cover of our people or interfering with their work. And in addition to that, it’s just anything and everything. I try to just work to help the company as much as I can to expose the truth. And part of that also involves things like this. We’re releasing stories such as this because we feel it’s in the public’s best interest.

Carmichael: I have a question for you that I’m just asking for your best guess if you choose to make a guess. If The New York Times produces 100 different stories and each of those stories is based on an unnamed source, how many of those stories do you think are based on a legitimate source and how many do you think are based on either no source at all or a friend of a friend of a friend who is the so-called unnamed source?

Givas: Well, that’s what we hope to find out with this lawsuit through depositions and discovery. And through this lawsuit, if we’re able to look inside The New York Times for the first time or have them answer honestly perhaps we’ll start to find out how many of those sources were real.

Carmichael: That’s right. You have a lawsuit.

Carmichael: What can you tell our listeners, if anything about that lawsuit? Because I know that you won at the New York State Supreme Court.

Givas: Yes we did. We got past the motion to dismiss and that does start to open the other side up to having to become involved in the process. The New York Times responded. We were kind of going back and forth on this so far but we do plan to have depositions, and we will depose members of The New York Times that were involved in this particular story before the court. And after that, I think the public is going to learn quite a bit about a media that they’ve trusted for years that has now decided to go into business for itself and not protecting the people and we are going to show why.

Leahy: The Project Veritas groundbreaking approach to journalism kind of addresses that problem of sort of unnamed sources, because you have pioneered the use of undercover videos. So this technical director, this Chester fellow at CNN, cannot deny what he says, because you got it there right on video.

Givas: There’s power in that. It’s visual. It’s not filtered through a lens or corporate advertisers or someone else’s opinion. It’s right there in black and white. And, yes, there is a certain power to that I think that you don’t get with digital media, or print news, or even cable news.

Carmichael: Didn’t you all win a lawsuit years ago, or somebody sued you, claiming that your method…

Leahy: Never lost! Nick Givas, Managing Editor of Project Veritas, thanks for that first-hand report of what’s going on with that Twitter ban.