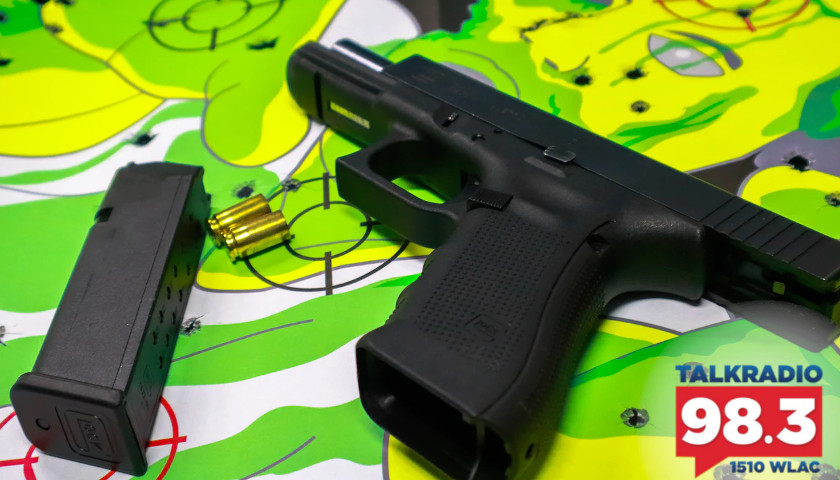 Founder and CEO of glockstore.com Lenny Magill Reflects on His Background and How His Business Blossomed

Live from Music Row Thursday morning on The Tennessee Star Report with Michael Patrick Leahy – broadcast on Nashville’s Talk Radio 98.3 and 1510 WLAC weekdays from 5:00 a.m. to 8:00 a.m. –  host Leahy welcomed Founder and CEO of the Glock Store, Lenny Magill in studio to outline his curious adventure towards a career in Radio, TV, and ultimately starting the Glock Store.

Leahy: We are in studio with our new friend from California, Lenny Magill, CEO and founder of the Glock Store. On the web at glockstore.com. Moving your operations here to Nashville. Now we’re going to learn the story of how the Glock Store got started in San Diego.

Magill: I got us to the point where I was an advertising salesman for a TV station. And I met one of my clients who was a gun range, and I did a commercial for him. Super successful. He introduced me to a gentleman named John Bianchi. John Bianchi was a manufacturer of holsters. He had a big company, literally was one of the big icons in the gun business back in the early 80s. And he had a pistol tournament out in Missouri, of all places in Columbia, Missouri.

Leahy: Capital of the state.

Magill: That’s right. And basically, he had an international pistol tournament. The guy who owns a gun range introduced me to John Bianchi says, hey, He’s thinking, but trying to put this on TV and you’re in the TV business, go talk to him. So I go up to John Bianchi’s office. It’s a massive place. It’s a 120,000 square foot building. He’s got 300 or 400 people working there. And I say, Oh, my gosh, this guy’s really something.

And so I do more research. And John Bianchi, of course, is this huge holster manufacturer supplying police departments and everybody around the world. And so I go into his office, palatial office, beautiful place and I say to him, I’ve got this pistol tournament out there. I said, Well, I can put it on TV for you. And he goes, well, I have no budget. (Chuckles) And I thought, well, here you are and it’s a huge office and you have no budget.

I said, Well, okay. Can you give me some money to get out there, pay my airfare and get my hotels, at least get me out there? He said, sure, I can. Now, I’ve never done a half-hour TV show before. But I figured I’ll figure it out. I’ll go ahead and do it. He went ahead and said, I’ll pay your airfare, pay your hotels. And I said, great. He said, but I’m going to do all the work on the back end. So I want to own the show.

Leahy: Okay. So he owns the show.

Magill: I own the show. That was a negotiation.

Leahy: You win that negotiation.

Magill: He said, fine. I said, in fact, I want to own it in perpetuity now. So not just the first year and he said fine. I shook our hand to the whole deal. And so he flew us out to Columbia, Missouri. I took two guys out there. We had these old clunky, three quarter inch cameras, ran around, did a whole bunch of interviews. And basically, people were saying, Well, what’s this for because they’d never seen cameras.

Now remember, this is before cell phones before, when people had video “cameras.” Not many even still cameras at that point. So there are some people taking stills, but we were the only guys taking video. And there were 300 people here competing, 300 competitors plus their families. So they’re about 7, 800 people floating around this event. And we’re running around with these big old clunky cameras. And they’re saying, hey, who’s this for?

And I say this for we’re ESPN. They said, what’s that? (Leahy laughs) And we’d have to explain what ESPN was. It’s going to be on TV and all that stuff. And they said okay good. Well, can I get a copy? This is back when there was VHS and Beta. So I started thinking, well, okay. Yeah. And so that happened a bunch. And so one day after the event, it was Thursday or Friday night and we’re driving around in Columbia. It’s kind of a small little town.

Magill: The little town was closed and it was about 10 o’clock. And we’re driving around. There’s nothing to do. We just had dinner. And so it’s basically a dead little town. But at the end of the day, there was this one store open, and it was called Kinkos. And I remember seeing 24-hour copies. I said, 24 hours? I’ve never seen this door open 24 hours. But I thought you know what?

Let’s go in there and see if they can help me make a flyer to advertise this thing because I thought, well, maybe we’ll start handing out flyers and we can sell a VHS tape. So we go in and there’s this college guy, long hair, sitting there by himself he says how can I help you? And these are the early days of computer graphics. And he said, yeah, I can help you do that. So we made a little flyer that said the Bianchi Cup and did all the different things of what it was going to be pistol tournament and all this stuff.

And you have a chance to buy it in Beta or VHS checkbox. And you can send a check in to this address with a little order form. So we made those flyers, and we printed up 500 of them. And the next day, people would say, hey, well what’s this for? It’s for ESPN. And they’d say, what’s that? And so we’d hand them a flyer, and they’d say can I get a copy.

We’d say sure. Here you go. So we handed out a whole bunch of flyers in the parking lot. We did all that stuff. So I kind of forgot about that. We’re busy making this video. At the end of the event Sunday morning, we’re wrapping up all the gear, getting ready to go, and there is a big trailer and a big motor home.

John Bianchi has this motorhome air-conditioned. Of course, it’s Missouri. It’s May. It’s hot and steamy and Bianchi sticks his head out of the window. Hey, Magill, come on over here. I want you to tell these guys about ESPN. So I go into the trailer into the motorhome, and he’s got five guys sitting there. They’re all execs from the gun business, Colt, Taurus, Smith and Wesson, and all these guys sitting there. And he says, tell them about that TV show thing.

You know, that ESPN thing. So I pitched these guys on ESPN, and right there, in my mind, I make up this story. (Leahy chuckles) I say, look, guys, I’m going to go ahead and get you on TV, and we’re going to promote the event. And we’re going to promote shooting. It’s going to sell more products. People can get involved in competition shooting. I need each one of you guys to do a commercial on the show. And I said it’s $5,000 each.

And there’s six of them with John Bianchi. And Bianchi says, I’m in. Because it was the Bianchi Cup. And then the guy from Colt goes oh, I don’t know. And he goes, hey, you got that money in your pocket. You’re in, too Bianchi tells them. And so the one guy from Smith and Wesson, now they’re drinking Wild Turkey. Okay? And I’m from California. I don’t drink that much. And so the one guy he pours a shot, puts it on the table, says, have a shot.

Magill: For the video from all around the world, too. It was crazy. I got 400 checks at 50 bucks each. And I’m thinking Oh, my gosh, this is a business. Then another guy calls me up and says, Hey, we’ve got a pistol tournament up here in Los Angeles can you come video it? I said, sure. So we ran up there and videoed it. And then at that point, I thought, I’m not even doing the ESPN thing.

I’m just gonna go ahead and sell the videos because there was this worldwide audience for competition shooting. And I became known as the gun video guy. And I literally, as I said earlier, did these pistol tournaments for all the major companies and did videos for all the major companies at the trade shows. And I started to do instructional programming on how to shoot as well as the tournament itself. And I became introduced to some of the best shooters in the world. And I went to their houses and did videos with all the top guys for the NRA out of Campari, the rifle, pistol, shotgun, everything.

I have 400 videos that I still sell on streaming as well as through Amazon, as well as just regular DVDs that spun me into one video I did on Glock. I did a video on Glock, disassembly, reassembly, adding parts and pieces to it. Very popular, sold thousands of copies. And I thought, wow, this is pretty cool. I like it. And I did another Glock video and more customization. And people started calling up and say, hey, can I buy that part?

Magill: And this is again before the Internet. This is on the phone with people saying, hey, I saw that part on the video. Can I buy that? Sure. (Leahy laughs) So one of the most popular items we sell is tungsten in guide rod. And tungsten in the guide rod replaces the Glock factory plastic guide rod. And because it’s tungsten in, it’s heavier in weight. And because it’s heavier in weight, it helps reduce recoil and it makes the gun a lot easier to shoot and it makes it more accurate because it is shot to shot because the gun is not jumping around as much. So that said, we started making tungsten and guide rods with an outside machine shop.

Leahy: So how did you make some? Did you have a vendor?

Magill: Well, we had an outside machine shop. And one time I looked at one point, I looked at the amount of money I was selling and not only spending with a machine shop, and I thought, you know what? I can buy those machines. And so I bought machines.

Leahy: And so you got in the business of making parts.

Magill: We are now manufactured. We have 18 CNC machines. I’ve got seven here in Nashville, and I’ve got 13 in San Diego. So we got 20.