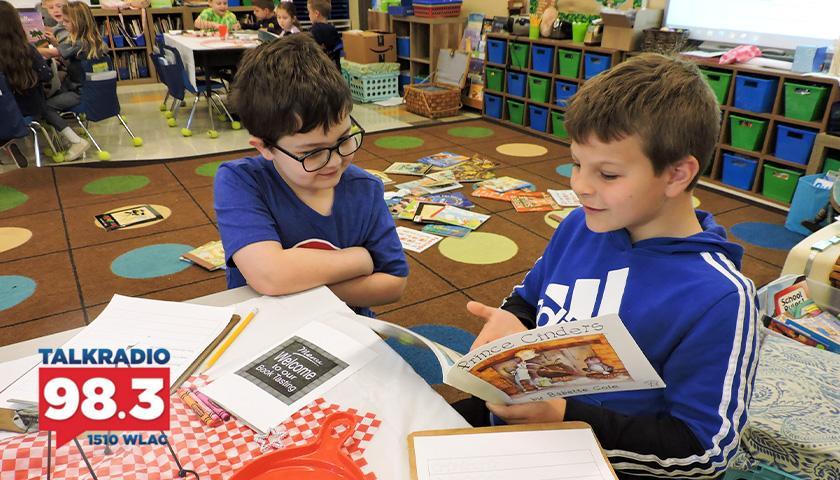 Leahy: In studio Trisha Lucente with Parents Choice of Tennessee. Tricia, you’ve got a lawsuit on the Wit and Wisdom curriculum in Williamson County. Tell us about that.

Lucente: Thanks so much for having me. So I started Parents Choice Tennessee, and we are suing Williamson County School Board. Penny Schwinn, our commissioner of education, and two administrators here in Williamson County over the curriculum Wit and Wisdom. As you said, they are teaching all the prohibited concepts that are against the law in Tennessee.

Leahy: This is the law that was passed in May last year, 14 prohibited concepts. They’re still teaching them?

Lucente: Absolutely. They sure are. I have a 200-page lawsuit that is telling us that they’re teaching it.

Leahy: Okay, so when and where did you file the lawsuit? What’s its status?

Lucente: We filed it in July, and Larry Crain in Brentwood is our lawyer, and it is they filed a motion to dismiss on Thursday of next week, November 10. We have a hearing for them to hear the motion to dismiss and for us to move on past that.

Leahy: What’s the argument that they want to dismiss this case?

Lucente: Oh, they’re going after our standing. So they’re trying to say that we don’t have standing to sue.

Leahy: So standing meaning you haven’t been aggrieved or hurt by it.

Leahy: But this is parents.

Leahy: Do the parents who are in the lawsuit have children who are attending Williamson County schools?

Lucente: Yes, there are three families, including my family. And then there is Parents Choice as its entity, as the organization. And we’re representing all of our members. So all the parents that are members of Parents Choice.

Leahy: So this whole standing thing is just a dodge of the main issue, isn’t it?

Lucente: Of course. Always. It is their first move.

Leahy: What do you think the chances are that the judge will dismiss the case on standing?

Lucente: I think that we have a really great case against standing. And I do think that there is another law also that our attorneys are leaning on that says that any citizen can sue a government entity whether or not they have damage.

And that’s part of something that we are leaning into our standing. But we’re parents trying to say, you can’t teach this to our children, and there should be a whole lot of parent turnout, so it will be interesting to see what happens.

Leahy: The issue of standing has always bothered me because it seems like if the left wants to dismiss a case, they’ll say, you don’t have standing.

Lucente: And they also are arguing, I think, that it’s a political issue and we’re trying to make a political point.

Leahy: There’s a law that prohibits the teaching of 14 concepts. And you’re saying they’re teaching most of them?

Lucente: Oh, they are. They’re teaching them, then they’re teaching it. So wit and wisdom is a curriculum that is based on the framework of social-emotional learning.

Leahy: Which is basically critical race theory by another name.

Lucente: It is. What I like to say is social-emotional learning is a train track. Then CRT and critical theory are the train. And then gender ideology is the train, and then feminism is the train. And on and on. You can usher anything into a child’s mind once you’ve infiltrated their emotions.

Leahy: Well, that’s what they’re trying to do. Now, is anybody else Joining your lawsuit here? I mean, what about the legislators who passed the law? What do they have to say about that?

And then I proceed to tell them all the amendments that I think they need to make in order to hopefully make the law more enforceable because right now It’s very difficult to enforce that law.

Leahy: Isn’t the first arbiter of the commissioner of education Penny Schwinn?

Lucente: Including Williamson and Davidson. And so she issued these waivers. And why would somebody who went out of her way to make sure 33 counties could use this curriculum say that this curriculum is breaking the law?

Lucente: I would absolutely take her out of that. It should at least go to a body of a vote or something before any complaint is reviewed.

Leahy: Would you volunteer to be on that committee?

Lucente: Of course, I would. (Leahy chuckles)

Leahy: I’d be available to be on that committee. (Laughs)

Lucente: You would be great on that committee. It’s not fair. And I would say this. I would also give the schools a chance and a grace period when that law went into effect where they could pull the materials, and I would have the state be willing to help reimburse them for the money to replace materials that are breaking the law. And I think that would have given them a little bit more fidelity on the front end.

Leahy: Do they argue that the Wit and Wisdom curriculum does not violate the state law that prohibits the teaching of 14, in essence, concepts of critical race theory?

Lucente: Several school board members do. Several don’t say anything at all. But there are some that come right out and say, we are not teaching CRT. There’s nothing wrong with this curriculum. Parents and teachers love it. And that’s it.

Leahy: Have you talked to Carol Swain about this?

Lucente: I have. Carol Swain actually used some of our lawsuits.

Leahy: In her training curriculum.

Lucente: Yes. In her training curriculum. And Larry Crain, our attorney, is somebody that helped work with her on pieces of that training, too.

Lucente: Absolutely. So in 2020, Penny Schwinn sat in front of our Senate Education Committee, and Senator Bell was asking her several questions about the waivers, specifically when parents were raising questions and calling their representatives.

So he asked her a few things about its failure, and she said that the content of the material is more important than its ability to meet the standards.

Lucente: We will we’ll know on Thursday next week when we pass the motion to dismiss. And we have a very great long list of discovery questions that we’re ready to go for.