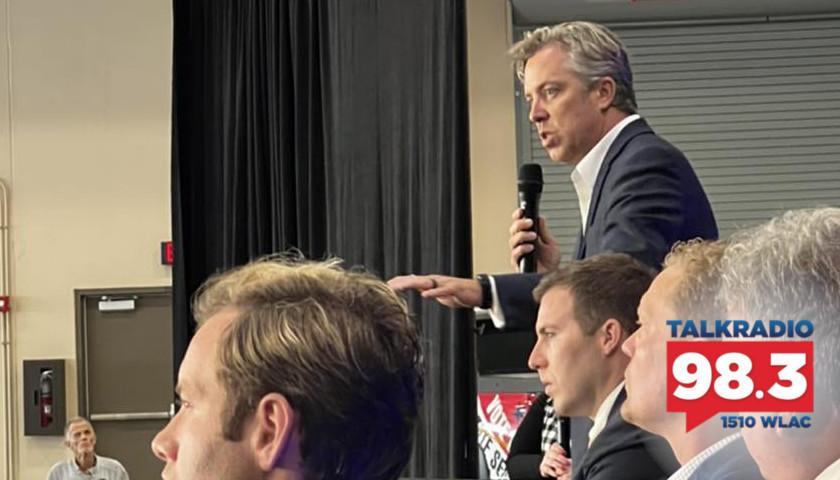 Live from Music Row, Wednesday morning on The Tennessee Star Report with Michael Patrick Leahy – broadcast on Nashville’s Talk Radio 98.3 and 1510 WLAC weekdays from 5:00 a.m. to 8:00 a.m. – host Leahy welcomed TN-5 GOP nominee, former Mayor of Maury County Andy Ogles to the studio to discuss past achievements as mayor and issues he is hearing on the ground through state town halls.

Leahy: In the studio – and I gotta say it again, Andy – Andy Ogles, the former mayor of Maury County, that bastion of freedom, that turbocharged engine of economic growth.

Ogles: I missed that. I really have.

Leahy: I mean, who else says that?

Leahy: I think that actually, that phrasing really was yours, which I then grabbed as your intro,

Ogles: Two different statements on different days. But then you merged them.

Leahy: And merged them together to describe Maury County. And of course, you were there for four years, and Sheila Butt now is the mayor.

Leahy: And by the way, we’re going to have a mayor’s roundtable here with Sheila, Joe Carr from Rutherford County, and then our friend in Coffee County, who’s a former state rep.

So let’s talk a little bit about your tenure at Maury County. During your tenure, your four years there – you just ended your term on August 31 – you presided over an economy, a huge growth in Maury County.

Leahy: And Maury County, is it like the fastest growing county in the state?

Ogles: It is. Both in residential and job growth.

Leahy: So a great place. And you still live there.

Ogles: Yes. And will never leave.

Ogles: Sometimes people ask that question of, all right, well, when you get elected to Congress – of course we still have to win, of course. But 27 days and counting.

Ogles: That’s right, and we are counting, but are you going to move to D.C.? And the answer to that question is never.

Leahy: Never. Why would you do that with a family? Stay there?

And for those that decide to do that, God bless them. But I’m a Southern boy. I’ve got a farm here down in Maury County.

Leahy: I’ve been to your farm. And of course, you got some great fruit trees out there that you planted. You kind of followed the Thomas Jefferson plan, it seems like, in terms of all the trees that you planted and what you’re doing there.

Ogles: Yes, we expanded our orchard, and then our neighbor just sold. And so I bought a little extra property and a pond next to, so I can expand our livestock because of access to water, I could get into the weeds on that. But anyway, it’s great.

Leahy: So let’s talk about the commitment to America. This was announced by Minority Leader Kevin McCarthy a couple of weeks ago. And it seems to take off on all of the key issues that I hear about, you hear about, when you go out on these events, grassroots events that are kind of turned into town halls where people ask you questions: the priorities, the things that people are worried about. What are the top issues they talk to you about?

Ogles: Think back to like Newt Gingrich in the Contract with America, right, with this here are the problems that we see, and here are the things that we’re going to focus on and get done. And I think that’s what the American people are wanting.

But what’s interesting, you know, we live in a conservative state. We live in a conservative area. And the issues that resonate here are resonating across the country. So when you look at Las Vegas – so there are three congressional seats there in Las Vegas; one of them, it’s an R-2, meaning the Republican has a slight advantage. We were going to win that seat.

But the other two seats are D-2, D-4, meaning that the Democrats should win. And I think we’re going to end up winning all three of those seats.

Leahy: I think you’re going to win the Senate race there, too. I think Adam Laxalt, the son of Paul Laxalt, a friend and confidant of Ronald Reagan, I think he’s going to beat Cortez Masto. What’s her last name? Cortez Mosto, a Democrat incumbent there.

Ogles: What you’re seeing is that the top five, six, seven issues all are really commingled because it deals with the economy, with inflation, with the price of fuel, energy independence. Crime, of course, is a huge issue even here in Nashville. And immigration, of course.

And again, kind of dovetailing with that, the fentanyl crisis. And so I was on the phone with a congressman from up in the Dakotas a couple of weeks ago, and he said, Andy, historically, when you think about illegal immigration, as a country we kind of say, well, that’s Texas’ problem or that’s New Mexico’s problem, right.

But now with this flood of fentanyl that’s coming into the country, it’s now a problem at every doorstep across the country.

Ogles: Everywhere. And by the way, China is intentionally flooding the United States with fentanyl, through Mexico. It is an act of war.

Leahy: Yeah. And let’s go back to the Commitment to America. I’ll just hit the highlights of this.

Ogles: That’s a limited edition. I only have two of those, and I gave you one of them.

Leahy: I’m reading from it now. The four key areas: Number one, an economy that is strong, fight inflation and lower the cost of living, a nation that is safe; number two, secure the border and combat illegal immigration; number three, a future that’s built on freedom, make sure every student can succeed and give parents a voice; number four, a government that’s accountable to preserve our constitutional freedoms.

Let’s go back to that fight-inflation thing. It’s not doing so well because the Democrats are spending money like drunken sailors – with apologies to drunken sailors.

And yet you still have Democrats talking about this debt forgiveness for student loans. But when you go back in time, what created this inflation, what created this recession, was the government giving money away. Giving money away it didn’t have. ECON-101. The very basics of economics is when the government oversupplies an economy with money, the backside of that is inflation. I mean, that’s just a fact.

And there’s a direct correlation with the size of the dollar spent and inflation. And so now, even when they know what they’re doing is breaking our economy, they continue to do it.

Ogles: And I think they are deliberately trying to sabotage the economy so that when the Republicans take control and we will, that we can’t fix it. But we are going to fix it. And part of that is through energy independence. So how do you fix this?

And so both the United States and Europe have to become energy-independent, because our enemies are leveraging that against us. And you even see OPEC, at a time when you have skyrocketing prices, and inflationary pressures, are they are cutting the supply of oil.