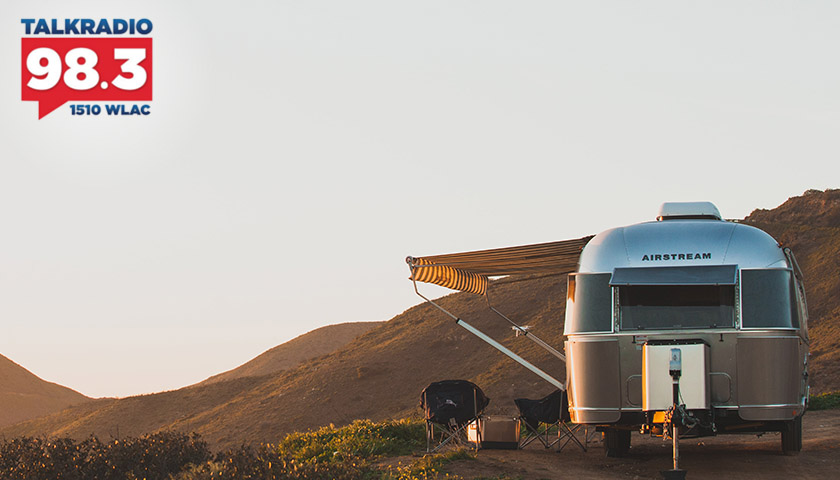 Author of Journeys with a Tin Can Pilgrim, Lynda Rozell on Inspiration to Give Everything up and Travel via Airstream

Live from Music Row Tuesday morning on The Tennessee Star Report with Michael Patrick Leahy – broadcast on Nashville’s Talk Radio 98.3 and 1510 WLAC weekdays from 5:00 a.m. to 8:00 a.m. – host Leahy welcomed Lynda Rozell, aka the Tin Can Pilgrim, to the newsmaker line to discuss what motivated her to sell everything and hit the road in an Airstream trailer.

Rozell: Good morning. I’m so happy to be here. And a tin can pilgrim is what I call myself because I live in a big tin can on wheels, also known as an Airstream travel trailer.

Leahy: Airstream, of course, they are the elite trailers. When I was a kid, my dad aspired to own an Airstream trailer. That was in the 60s. And the deal was that we started off with these tents that you’d haul around behind the car and you’d go to a campground and put up the tent.

My mother hated the tent. (Chuckles) So then we progressed to a regular trailer. But my dad always wanted to get an Airstream but could never afford it. Tell us about why you live in an Airstream trailer.

Rozell: That’s the second part of the name. The pilgrim part. I think I’ve led a pretty conventional life before I started doing this. But about three years ago, I was on the verge of becoming an empty nester.

And I also was at kind of a transition point in my career. And I really just sort of prayed to God and said, well, what should be the next thing I do in life? I had my own ideas about that but somehow he put it on my heart to buy an Airstream travel trailer and a truck. I had to learn how to drive the truck because previously I lived in an urban area and only drove a Mazda three.

So that was quite a transition itself to go up to a Ram 1500 truck. And within four months of really coming to the decision to do this, I had quit my job, sold my house, taken my equity, and purchase the Airstream travel trailer and the truck, which sounds kind of crazy.

Leahy: Well, it doesn’t sound go totally crazy. But it sounds a little bit unusual. I sort of remember some stories about people again, back in the 60s, I’m dating myself, people that just roamed around the country.

Rozell: Well, actually, at that time in the 1960s, I was too young to watch TV. (Laughter) Well, the idea was the guy was a guy diagnosed with some terminal disease but it would be a disease where he would be normal and then just drop dead.

That was the claim. So what he did was, I’m going to live life and he sold everything and he ran around the country having adventures with beautiful women and crazy people. You know? One of those deals.

It ran for three years. It was very popular. At the end of the show, it was determined that it was a misdiagnosis anyway and he went on to live for a long time. That was the premise of the show.

Rozell: That’s funny. I wonder if he fell in love with the lifestyle because so many people do. I’m a full-time nomad. I don’t have a stick and brick house, as we call the stable location in one place.

A traditional house. But this is a huge movement. There are a lot of people that are doing this, and it’s delightful because I can go anywhere. I want. My home is on wheels.

And especially out west, there’s a lot of land that’s public land that’s very inexpensive to camp on. And I’ve also made networks of friends where I can roam around and visit people I’ve met and stay in their yards or their driveways temporarily.

And at the same time, I can go visit my grown children whenever I want and bring my own home with me. It provides a little bit of that comfortable distance, which makes it easy to visit often.

Leahy: So tell me about your life before. I’m not going to say you didn’t go crazy.

Leahy: But tell me about your life before you made this dramatic change in it. How about that?

Rozell: Sure. I think this is something I really found myself able to do because of developing faith in God and radical trust in God. And that happened through a lot of suffering in my life.

I had been very successful professionally in my youth. I had a prominent position in the federal government as an attorney, working for the federal trade.

Leahy: You were an attorney?

Leahy: You went to law school?

Rozell: I went to UVA. (Chuckles)

Leahy: You went to the University of Virginia Law School?

Rozell: Yes I did.

And very promptly went to work for a prominent Virginia law firm then called Hunton and Williams which has since become swallowed up at one of these mergers. And I worked for them for a few years.

And then I ended up through certain circumstances with the loss of a close friend. I started to go to Church again, and I started to reevaluate the track that my life was on because what I did was work all the time.

Rozell: Yes. Well in the tail end of the 1980s when I graduated and being a graduate from a top law school meant that you were wooed by law firms and paid very handsomely. But the cost of that is you were expected to work very, very hard, and the law firm had to be number one.

And my husband didn’t really have a problem with that, because he was really enjoying all the things that this position enabled us to enjoy together as a couple in terms of lifestyle.

And it was really a merry-go-round. The first nine months I worked I ended up having one afternoon off. I literally worked every single day. (Chuckles)

Leahy: That’s not very healthy, is it?

Rozell: It is not healthy, but it was very exciting. But you burn out when you work like that.

Leahy: Yes. You burn out. And so you were married. How many kids did you have? I have two children. They’re both grown, both daughters.

And they think that what mom is doing now is the coolest thing ever in part because they can see that I am the happiest I’ve ever been in my life.

Rozell: What really what sparked the whole thing was seeing Airstreams for the first time because they’re pretty cool, aren’t they?

Leahy: Because they are pretty cool aren’t they?

Rozell: They are really cool. And when you were saying your dad wanted to buy one in the next, probably some of those Airstreams that you saw, they are still on the road now.

Rozell: That’s the thing with Airstreams. They are very expensive, but they’re really not like other RVs, because they’re built like airplanes, and they have an out-of-home and an inner home of aluminum.

They still involve a great deal of hand labor in the assembly process and in the manufacturing process. And I have friends who have vintage Airstreams from the 1959s and 60s, where they’ve had to replace certain things and have upgraded certain things. But the basic trailer is the same as it was.

Leahy: Now, if I wanted to send you a letter by mail, where would I send it?

Rozell: Oh, that’s a great question. You would send it to Florida because I have something called a mail forwarding agent in Florida, and I’m actually a Florida resident. And a lot of full-time voters and full-time RVers do this.

Leahy: Of course, because there’s no state income tax there.

Rozell: Well, Florida’s, big Texas is big. South Dakota is big. Tennessee is actually growing in popularity too as a location.

Leahy: Where are you right now by the way?

Rozell: Right now, I am on the north shore of Long Island, looking out of a window in a 1790s farmhouse that friends of mine who are also Airstreamers now.

I came to visit them for a couple of days. My Airstream is parked in their driveway and this is one of the benefits of Airstreaming.

Leahy: If somebody wanted to buy your book, where would they go? We’ve got 30 seconds. Give us a plug for your book on your website.

Rozell: Okay. It’s tincanpilgrimbook.com. Or you can go to Amazon and search for Journeys with a Tin Can Pilgrim.

Leahy: Tincanpilgrimbook.com. Lynda Rozell, good luck on your travels. When you get to Nashville, come on in studio.

Rozell: Absolutely, I would love to do that.