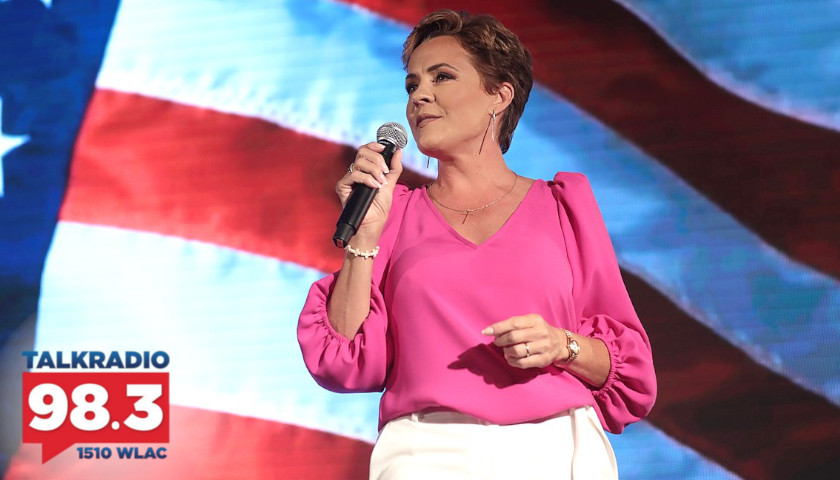 Live from Music Row Friday morning on The Tennessee Star Report with Michael Patrick Leahy – broadcast on Nashville’s Talk Radio 98.3 and 1510 WLAC weekdays from 5:00 a.m. to 8:00 a.m. – host Leahy welcomed gubernatorial candidate for Arizona Kari Lake to the newsmaker line to discuss her mission for Arizona, endorsement by Donald Trump and battling the Fake News.

Leahy: We welcome to our newsmaker line Kari Lake, a Republican candidate for governor in Arizona endorsed by former President Donald Trump. Welcome, Kari. Thanks so much for joining us today.

Lake: I’m so happy to be here. Good morning.

Leahy: Well, and as you know, you’re on The Tennessee Star Report. We own and operate 10 state-based newspapers. We also have and have covered your race in Arizona at The Arizona Sun Times by our reporter there, Rachel Alexander. Looks like you’re leading in the polls there. Tell us about why that’s the case.

Lake: I think our message is resonating with Arizona pure and simple. We’re talking about the things that people care about, primarily education. Our moms and dads are standing up, speaking out about the curriculum being taught to their kids.

And unfortunately, in one of the school districts here, they’ve been harassed and doxed and really treated poorly. So I’m speaking out to them. I’m talking about the border and how we can secure the border and stop the flow of drugs that are pouring into our state illegals and who knows who?

We’re seeing a lot of trafficking of human beings and children. And we’re talking about the economy down here as well. I just was speaking, Michael to some elderly people who are on a fixed income, and they said they couldn’t afford to make ends meet and before they barely could. And now they can’t. They can’t afford food anymore.

Leahy: You were for 22 years, the television broadcaster, the anchor at a local Phoenix television news station. You resigned because you didn’t like the way the news was being reported. Tell us a little bit about that and how you made that decision.

Lake: Yes. I worked for 27 years covering Arizona, all the stories, and all the issues, and really got to know the people and the state well. But as you know, journalism has changed quite a bit over the years.

When I came up and learned about journalism and became a journalist, you told both sides of the story. And sometimes there are more than two sides, and you laid it out and you didn’t get opinionated.

But it’s become beyond just telling the story. It’s become opinion bias. And I think it crossed over into being immoral when COVID struck with the refusal to cover stories that would actually help people make them healthier, get them out of quarantine and back to life and open up our economies again.

But the media just didn’t want to cover that. And I felt it was immoral to remain in that position and continue to do the news that they were only interested in telling half the story.

Leahy: Trump endorsed you as the Republican candidate for governor in Arizona last week. I saw you live on my good friend and mentor, Steven K. Bannon’s War Room broadcast.

Lake: It was really cool. I thought I was in the wrong place when I showed up. And then, of course, I recognized the set. And it was great to see Steve. And I really was honored to be on the show. He’s had me on numerous times, but not as you said right there at the embassy.

So it was great to be in D.C. and we talked about a lot of issues. He’s been right in front of a lot of the big stories, including the election and COVID, of course, which has affected so many of us. And that’s why, as governor, I want to get tough on China.

We’ve had our political elite sell us out to China, and it’s unconscionable that we would be doing business with the Communist Chinese regime.

We need to cut all of the deals that we’ve made that our political politicians and lobbyists have made, and we need to bring back manufacturing to Arizona. And, frankly, to America, like President Trump was starting to do as president.

Leahy: That’s a great idea. How, as governor, can you cut those deals or end those deals with China and bring more manufacturing into Arizona?

There’s a lot of land to work with. Our tribal nations want to bring business, and they want to bring manufacturing in and grow their tax base. And I would love to help make that happen and forge those relationships.

And sometimes it’s a lot easier to work with our tribal partners. I just talked to a business that opened up. They are a steel fabricator and they negotiated a deal to work with one of our tribal nations.

And so I think there’s some real opportunity there. And I would love to be the governor that helps make some of those deals so we can bring our supply chain back to Arizona. And we’re not worried about what kind of funny business and games China is trying to play with us.

Leahy: Speaking of funny business and games, I saw a terrific interview that you did. Somebody from The Arizona Republic, a formerly good newspaper, but I guess over the past 20 years it’s turned into nothing but left-wing propaganda.

It’s the dominant paper, I guess in the Phoenix area there and a reporter there was going to try to ask you some gotcha questions and you wouldn’t respond because you told them to correct all your other lies about me. Then I might talk to you. That was fabulous.

Lake: (Laughter) It’s sad. As a journalist, I always prided myself in doing good work and being fair. And so I’m saddened to be honest, that our paper has turned into just a leftist activist rag. And I’m not going to give them interviews.

And interestingly, actually, they did a story a few days later about me and they asked for a statement, and I was really busy campaigning that day and I put together a statement on the story that they were doing. They ended up using hardly any of it. They used half of a sentence, not even a sentence.

Lake: I think it’s because what I said struck a nerve with them, and they don’t want me having the ability to sway voters to see some of the policies that I’m pushing that will help Arizona.

So they cut a tiny little snippet of my statement, a half a sentence, and used that. So they’re unethical and they’re biased. And when they start to change their ways and actually cover Arizona fairly, then I will start to give them an interview.

Leahy: I got four words for you. Are you ready? (Lake chuckles) Don’t hold your breath. Because I don’t think they’re going to do that. That’s why we started the digital newspaper out there, The Arizona Sun Times, to accurately report what Kari Lake is saying and what everybody is saying.

Lake: You know what I love about your paper? I’ll call it a paper, even though it’s digital, is you don’t get opinionated in there. I mean, in the op-eds, you probably do. But I’ve actually talked to Rachel, and I’ve given her soundbites and I’ll say, well, what about mentioning this?

And she said, you know what? That would be an opinion and I’m not going to put that in the story. And so I really respect that. And it’s a really great outlet for news. I hope that more people find it.

And I’m always happy to share your stories because I think they’re fair. I don’t want somebody to be my cheerleader. I just want them to cover me fairly.

Leahy: Yes. And that’s what we’re trying to do. It’s interesting how you described the way that The Arizona Republic took your statement, which you spent some time on. You got other stuff going on. You gave them a statement and they just took little snippets of it.

We have experienced that same thing when, as you know, we’ve got 10 state-based news sites and then the left and all the big media outlets are trying to pigeonhole us as being disinformation, et cetera. We will engage with them. The same thing happens with us! It’s almost as if they’re talking to each other.

Lake: Yes, but they didn’t want my statement out there because my statement went against their narrative. And I know how they play these games because I worked in the media.

Lake: I’m going to expose them.

Leahy: Well, send us a statement. We’ll publish it in its entirety. How about that?

Leahy: Kari Lake, Republican candidate for governor endorsed by Donald Trump in Arizona thanks so much for joining us. Come back again and good luck.

Lake: I would love it. Thank you so much.