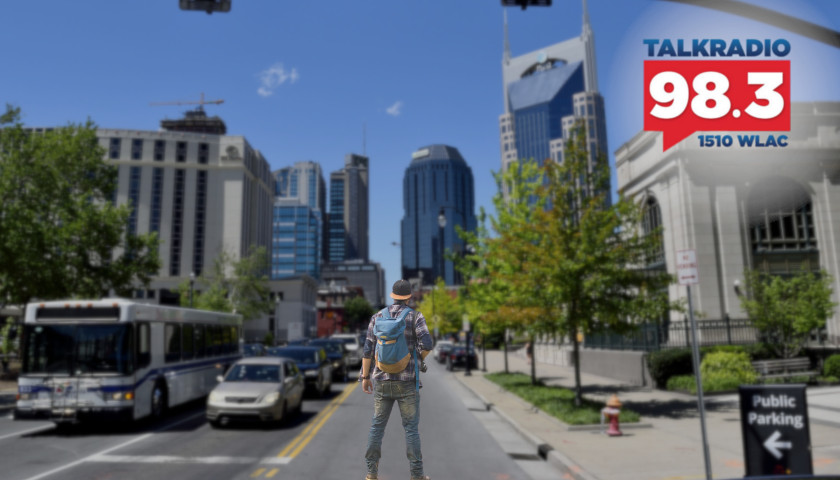 Live from Music Row Thursday morning on The Tennessee Star Report with Michael Patrick Leahy – broadcast on Nashville’s Talk Radio 98.3 and 1510 WLAC weekdays from 5:00 a.m. to 8:00 a.m. – host Leahy welcomed senior editor-at-large at The Epoch Times Roger Simon in studio to weigh in on the un-needed “Tennessee on Me” initiative proposed by Governor Bill Lee offering out of state tourists a $250 airline voucher.

Leahy: Time flies when you’re having fun, Roger. All-star panelist, Roger Simon. Roger, I want you to react to this Tennessee story.

It’s about something Governor Lee has done. Headline. Tennessee to Use Taxpayers Funds to Pay out-of-State Tourists to Visit. What do you think about that?

Simon: Well, first of all, (Chuckles) you say taxpayers’ funds, which is true. Of course, that’s what’s being used. Except that the program is being called “Tennessee on Me.”

Leahy: And it’s Governor Lee’s program. Is it coming out of his pocket?

Simon: As far as I know no. But if it is I have a request if one of his people is listening. Ever since I’ve seen Crazy Rich Asians, I’ve really wanted to go to Singapore they can offer me a ticket or with my wife because I don’t want to go solo.

That would be really kind of great. And I know there’s a little bit much, but we do like to go business when we fly that far because it’s not like going to New York or something.

You’ll end up being a pretzel. But joking aside it seems to me this is kind of nuts because the idea is to increase tourism, but it’s already increasing.

If you were in the city on the Fourth of July, you couldn’t go anywhere because there were so many tourists already here. (Chuckles)

There are so many other ways to spend your money listeners not the governor’s money. Or he claims is his money. He’s a rich guy, but he’s not that rich. (Laughter)

Or don’t make me rich.  This is kind of a sidebar in a way to the all the terrible things he’s been doing like looking the other way when teenage illegal aliens are being dropped off around the corner.

Leahy: He wrote a stern letter I think.

Simon: Oh did he?

Leahy: (Laughs) That’s very effective. By the way, the program was initiated by Governor Bill Lee and dubbed Tennessee on Me will grant $250 airline vouchers to any individual who travels to Tennessee’s largest cities and stays at least two nights.

Simon: It won’t get me to Singapore.

Leahy: Are you going to propose hey, Governor Lee, how about Singapore on me so Roger and his wife can go to Singapore?

Simon: Yeah, well, they’re supposed to have the best street food in the world. Lots of things to be said for Singapore. I mean, if you’re so crazy it’s quite a place. And it’s got the lowest COVID rates in the world. It’s safe!

Leahy: This is so rich in irony. This tweet from Governor Lee. I’m gonna follow it up with Brad Paisley’s tweet right now. Brad Paisley, who’s been hanging with Jill Biden.

Leahy: I like Brad Paisley. Good artist, but come on, I’m not making this up, Roger. Here’s the tweet from Governor Bill Lee. Tennessee is known around the world for its music scene, scenic beauty, and iconic attractions.

And I’m excited to team up with Brad Paisley to promote Tennessee vacations. 10,000 airline vouchers are up for grabs when travelers book a trip to Tennessee, Lee said in a tweet. Attached to a video by country music artist Brad Paisley.

Tennessee is known around the world for its music, scenic beauty & iconic attractions, and I'm excited to team up with @BradPaisley to promote @TNVacation. 10k airline vouchers are up for grabs when travelers book a trip to Tennessee. Learn more at https://t.co/gTUps7pffx. https://t.co/Gfdw5dG8tT

Simon: The actual president these days.

Leahy: Yeah, Jill Biden hanging with her now, helping Bill Lee give away $2.5 million to people outside of Tennessee, not on him but on Tennessee taxpayers.

Here’s what Brad Paisley said. Y’all can come to Tennessee on me or wait on Governor Bill Lee or something like that. Anyway, book a two-night stay in Tennessee at tennesseeonme.com and get a free flight voucher #Nowplaying #TNonme. Well, it’s T N on us. There might be another verb we could use there. (Chuckles)

Simon: Is this going to be a boondoggle for the hotel keepers or what is it because it is booming again. There’s no question that.

And Tennessee and Nashville particularly have been very lucky in coming out of COVID because nobody can go out of the country very easily. It’s not a good deal. So people are looking for someplace to go in the US on vacation.

Leahy: And they don’t need $2.5 million to come here because it’s such a great place.

Simon: As I was saying is they can’t go to Paris if they want to go to because going to Paris is a real hassle right now.

Leahy: But they can come to Nashville. And not a good idea Governor Bill Lee. Not a good idea. And it’s not on you.

Simon: Once you heard that you could call it Tennessee on me, he figured it’s really good. I think the on me is the big part of it.

Leahy: This is going to really backfire. And speaking of backfiring. CPAC, the Conservative Political Action Conference, which has been around since 1970 or so, and it’s been run by the American Conservative Union, currently chaired by Matt Schlapp.

Simon: I was there.

Leahy: You were there right? Now the 2021 CPAC is going to be held in Dallas. Former President Donald Trump will be addressing the group.

There will be on Saturday, stifle your laughter here for a moment. I’m going to tell you what this is going to be. Governor Bill Lee will be there sitting on a panel at 12:55 pm this Saturday in Dallas.

Is he paying for his plane trip there with his voucher? I don’t know. Or maybe he’ll be handing out vouchers to people there. What do you think?

Simon: Tennesse has its own special Air Force One?

Leahy: I don’t know, but I’m going to read you the topic on which he is a panelist along with one other governor. And just stifle your laughter until I finish the topic.

Are you ready? The topic it’s going to be moderated by Matt Schlapp of the American Conservative Union. The chairman there. The topic is leadership, justice, and jobs in the age of wokeism. A conversation with ‘conservative’ governors.

Simon: You know Hannity made the same mistake. He gave Lee a big boost here too.

Leahy: A generous interpretation of what Lee has done here in Tennessee.

Simon: What’s going on here is that they’re not really paying much attention to what really is going on.

Simon: And they’re not paying much attention to the rank and file.

Simon: They never do. That I thought was the Trump revolution. Trump has got to pay more attention to that. I think, a little bit.

Leahy: Matt Schlapp at the American Conservative Union apparently hasn’t been paying attention to what Conservatives in Tennessee are saying or what Bill Lee has done here by bringing in Penny Schwinn as Commissioner of Education.

And then bringing in Juan Williams to be the Commissioner of the Department of Human Resources.

And Juan Williams, on his own, has put together these diversity inclusion councils, which are basically promoting Black Lives Matter, critical race theory stuff, and forcing state employees to do that. Governor Lee has been silent about that.