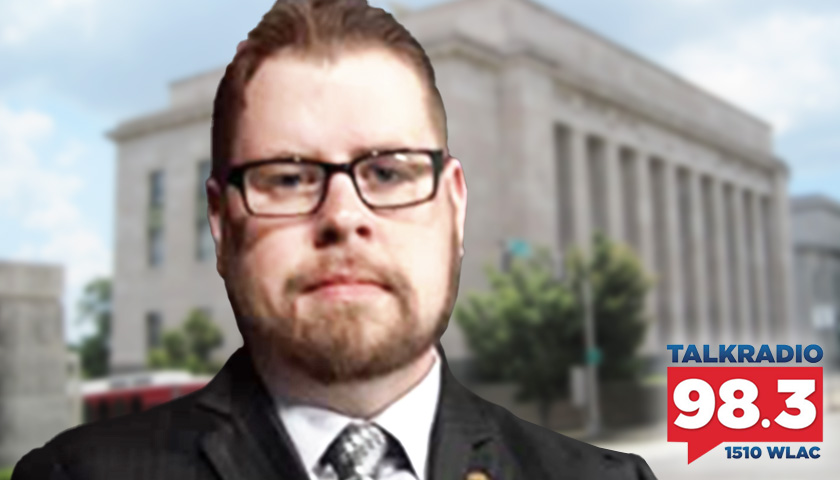 Leahy: In-studio with the official guest host of The Tennessee Star Report and our lead political reporter at The Tennessee Star on the web at tennesseestar.com. So just a reminder, Aaron, you’re going to be covering the event tonight, the big Epoch Times 5th Congressional District Republican candidate debate.

It’s going to be downtown. You can get tickets, free tickets. Go to Eventbrite. Just plug in The Epoch Times debate. Also sponsored by Young Republicans of Nashville and the Nashville Republican Women.

Two of the major candidates are dodging the debate – Beth Harwell and retired Brigadier General Kurt Winstead. Three will be there.

So they’ll be there, but Winstead and Harwell will not be there. It’s going to have an unusual format. It’s going to be livestreamed across the nation by The Epoch Times, and subject matter experts, including Carol Swain on education, Gordon Chang on China, and Hans von Spakovsky on election integrity will be there.

It should be quite an interesting event. You’ll be there. You’ll be covering and reporting it. I’ll be there just observing and learning.

So there’s that. Can you give us an update on the process by which the Tennessee Supreme Court is going about identifying and making public information available about the candidates they are considering for the next attorney general of the State of Tennessee?

The constitution gives the Tennessee Supreme Court, in a very unusual way – only state in the union where it’s done – the attorney general of the state is selected by the Supreme Court, which of course is appointed by the governor and confirmed by the General Assembly.

Herb Slatery, the current attorney general, said he’s not going to go for another eight-year term. We’re at July 12th. We have no idea what the Supreme Court is doing on this. Do you call them like every day? And what do they say?

Leahy: Crickets, this Tennessee Supreme Court, and this is an example of the constitutional flaw that we have in the Tennessee Constitution that gives one branch of government exclusively the ability to appoint a very important job in the executive branch, which really shouldn’t have anything to do with the judicial branch, the attorney general’s office.

And yet institutionally, the Tennessee Supreme Court is jealously guarding this prerogative embedded in our constitution and frankly, they’re not providing transparency to the process. Why do Tennesseans care about it?

Gulbransen: And I think that recent issues created by the Biden administration – of course, they tried to implement a nationwide vaccine mandate for people working for companies that had a hundred or more people, things like that – have put the attorney general’s role of each state in the country under an increased microscope.

So I’m also seeing an undercurrent of people who are calling for the General Assembly to hold advisory, informal hearings on the next attorney general in order to give the public a chance to sort of vet this.

Again, that would be informal and advisory. But the public and their representatives, it is very fair to wonder how the next attorney general or the applicants for that job would answer questions on federal overreach.

I would be interested since I’ve reported a lot on it. Would they take up the cause of the National Guardsmen and sue the federal government?

Leahy: Herb Slatery is not taking up their charge.

Gulbransen: No. And they won’t comment on that one either, by the way.

Leahy: Yeah, so this is all not good, and it’s lacking transparency in this instance. We’re calling for checks and balances institutionally, which are not embedded in the constitution. The Supreme Court.

I have some interesting news, though, that just developed. If you look at this, Aaron, what we find is, although the Tennessee State Constitution specifies the manner by which the attorney general and reporter – only statewide, the attorney general and reporter – essentially the clerk of the Supreme Court, is that the reporter duties, the process by which that person is selected, is exclusively the province of the Tennessee Supreme Court.

The duties and responsibilities of the attorney general do not lie in the Supreme Court. They are actually defined by statute; that is, by the Tennessee General Assembly.

And just as the Tennessee General Assembly provides those duties and responsibilities, it could, and might, take those duties away.

Gulbransen: So all the more reason for them to have an advisory capacity, at the very least in order to help select the next attorney general, since they can, to paraphrase what you just said, they can give it, and they can take away the responsibilities.

Leahy: Well, and they could create a new position, as was suggested here yesterday in the studio by John Harris.

The Tennessee General Assembly could remove almost all of the duties of the attorney general. They could keep the reporter’s duties to be the clerk of the Supreme Court and could create a new position. 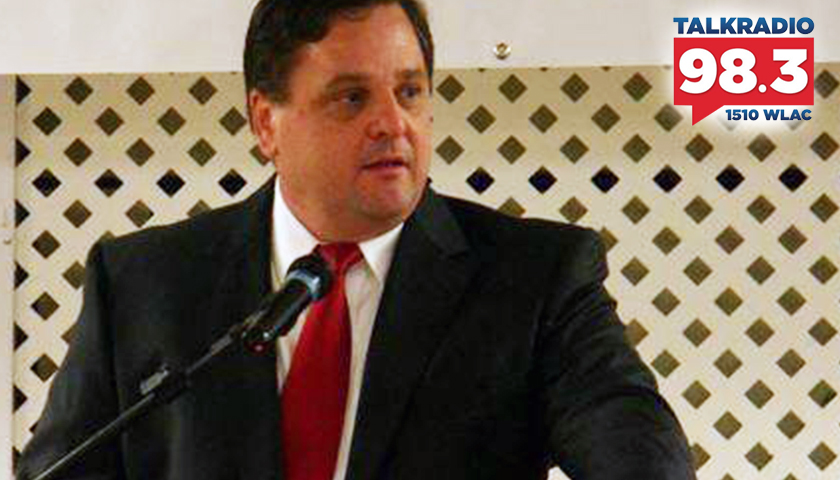 Attorney John Harris: ‘The Duties and Responsibilities of the Tennessee Attorney General Are Not in the State Constitution,’ But Are Defined by Statute

Live from Music Row Monday morning on The Tennessee Star Report with Michael Patrick Leahy – broadcast on Nashville’s Talk Radio 98.3 and 1510 WLAC weekdays from 5:00 a.m. to 8:00 a.m. – host Leahy welcomed John Harris, founder of the Tennessee Firearms Association, in-studio to comment on the possibility of a violation of the national constitutional principles of separation of powers in regards to the selection of Tennessee’s state attorneys general.

Gentlemen, I think we have a constitutional flaw in the state constitution of Tennessee because it’s a violation of the national constitutional principles of separation of powers and checks and balances. What do I mean by that?

The Tennessee General Assembly, which plays a vital role in everything that’s being done by the attorney general, has no say in that matter according to the constitution.

Yet, by practice, the governor’s pick – and remember, the governor appoints the Supreme Court justices – has been rubber-stamped with very little questioning about the judicial, the legislative, and the prosecutorial philosophy of the attorney general.

I think that’s a fatal flaw in our constitution. I think there is a possibility of fixing it. But John Harris, I want to talk to you a little bit about this.

The attorney general, in my view, should aggressively defend the Tenth Amendment rights of the state of Tennessee against usurpations of the federal government and the rights of individual citizens. Do you agree with that assessment of what the attorney general should do?

Harris: Oh, absolutely. That’s what you see other states do on a regular basis.

Leahy: The other states are out there. But our current attorney general, Herb Slatery, has been very weak, I think, in defending the Tenth Amendment rights of the State of Tennessee. It’s a long list.

I don’t want to go through all of them now, but it’s a very long list. I would say he’s weak. He said that he’s not going to go for another eight-year term.

The constitution says it’s an eight-year term. All the buzz is that Governor Lee wants to have the Supreme Court rubber stamp. And I use that term advisedly because that’s what they did last time when they picked Slatery.

They rubber-stamped this kind of left-wing former Judge Brandon Gibson who is now the chief operating officer of the state. But everybody says if you look at her opinions as an appellate judge, would you categorize her as left-wing?

Harris: I think I would. Left-leaning moderate at best, yeah.

Leahy: And she’s not going to be somebody who would aggressively defend the Tenth Amendment rights of the state of Tennessee or resist the usurpations of the federal government. I think we’re on a glide path right now.

I think that the Supreme Court has done a very good job in a lot of its recent decisions. My view on that. Justice Bivins is up for retention. An election on August 4th.

I know Justice Bivins and I have personally said here that I intend to vote “yes” to retain him because I think his judicial record is very strong. However, and James Madison would absolutely agree with me on this, the institution should be constrained.

The Supreme Court should not be able to pick the attorney general without the Tennessee General Assembly having a say in that. That’s my view. Your thoughts, John?

Harris: Well, if you look at the state constitution, the role of the attorney general, and the reason the court appoints it, that seat, that position, is because they are constitutionally, essentially the court’s clerk. Their job is to be the official reporter.

Leahy: In the constitution, it says, the Supreme Court shall appoint the attorney general and reporter.

Leahy: I think it’s the only state in the union where it’s “the attorney general and reporter.”

Harris: That’s correct. And our problem in Tennessee is our legislature, the policymakers have not really understood the constitutional role of the attorney general.

And so by statute, for two centuries now, they’ve been vesting the attorney general’s position with additional statutory authority.

Leahy: Let me just stop here for a moment. This is very interesting, because the selection of the attorney general and reporter, according to the Tennessee Constitution, is the one that we are currently bound by since 1870, but it was around since 1835 in the second constitution as well, the selection of that attorney general reporter is solely the responsibility of the Supreme Court.

Leahy: And it’s an eight-year term. However, the duties and responsibilities are not in the constitution. They’re determined by statute by the Tennessee General Assembly.

Leahy: Wow. So tell us, what does that suggest to us?

Harris: There’s been talk, particularly in the conservative right, of having an elected attorney general like other states do. And if we went that route, then we would have to amend the state constitution.

Leahy: And there have been some ideas, tries. I don’t think that such an amendment to the constitution would pass, just because the process is so long, and right now it wouldn’t affect anything for the next eight years.

Right now, we have a Supreme Court that has not given us the process by which they’re going to select the next attorney general. That’s an error, I think, on their part.

They should make it transparent, and robust, and these candidates should be subjected to very lengthy hearings about their philosophy.

Harris: They should. And that could happen as early as January or February of 2023. And the reason is that because these are statutorily assigned duties, issuing attorney general’s opinions, defending the state and Tenth Amendment matters, handling the criminal appeals, all of that statutorily delegated by the General Assembly to the attorney general, they could easily create another position, call it what you want, maybe solicitor general, and they could define how that position is filled.

Leahy: And the personnel that are currently in the attorney general’s office …

Harris: They could be transferred.

Leahy: The criticism of Attorney General Slatery and his predecessors is weak in defense of the Tenth Amendment rights of the state of Tennessee. And the people of Tennessee, going to see very weak.

Leahy: And no public accountability.

Harris: And all of that could be easily fixed by a General Assembly that was paying attention.