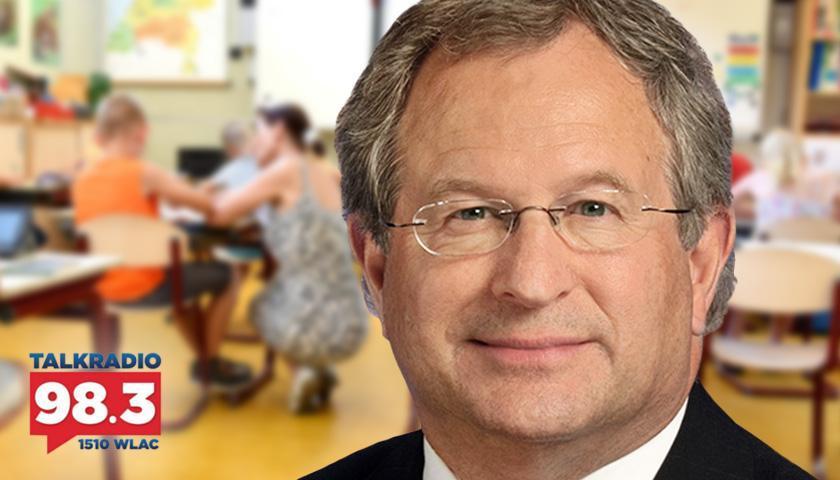 Live from Music Row, Monday morning on The Tennessee Star Report with Michael Patrick Leahy – broadcast on Nashville’s Talk Radio 98.3 and 1510 WLAC weekdays from 5:00 a.m. to 8:00 a.m. – host Leahy welcomed Chairman of the Education Administration Committee in the Tennessee House of Representatives (R-TN-83) Mark White to the newsmaker line to address the core of the third-grade retention bill and confronting issues in earlier education.

Leahy: We welcome to our newsmaker line right now our friend, State Representative Mark White from Memphis, who’s the Chairman of the Education Administration Committee in the Tennessee House of Representatives. Good morning, Representative White!

Leahy: I want to thank you. It’s a federal holiday and it’s 6:15 in the morning, and you are working. You’re talking to us. Thanks for getting up and doing this. I really appreciate it.

White: Well, thank you very much. But when you are on the Education Committee, there is never a day off.

Leahy: Never a day off. You actually have a long history as a teacher. We have mutual friends. You were their teacher many years ago. You were a science teacher, correct?

Leahy: See if you can shed some light on this third-grade retention bill. I’m watching local television reports, and there are so many people whining and complaining about it. Oh, they’re setting standards. And if you don’t meet these standards, you may have to repeat third grade or go to summer school. What’s so terrible about that?

White: Yes. Number one, I’m glad that everybody’s attention is on the fact that we need to be fixing this issue. And so I’m glad the opportunity is here if a child or a person reaches the 12th grade and they are still struggling with the comprehension of reading skills that are affecting their ability to go into trades or higher education. And so we have really got to address this and can fix this.

Leahy: Yes. Clearly, there’s a problem. I’ve read various accounts of how many third-grade students will perform below. I think it’s the English language art standards for reading and writing.

In the tests given by the state in third grade, some people say it could be as many as 65 percent of kids will have to go to summer school or be held back. Some say it will be less than that. How many kids would, under the current law, will be held back?

White: That’s the real conundrum, and that’s the discussion that everyone is having. It depends on how you look at it. The big issue we need to consider as we move forward on this and we will have a good hearing in a couple of weeks on this entire issue to hear everybody’s concerns.

But the main thing is there are a lot of opportunities for summer school and for tutoring that the state has put in place that no child has to repeat if they take advantage and the schools take advantage of these opportunities to make sure the child is reading proficiently as they move on past third grade.

Leahy: I congratulate you and the Tennessee General Assembly for identifying this very important problem here. Can I make a suggestion for your consideration?

Leahy: My view is, part of the reason that so many students are performing poorly in the third grade and other grades, but specifically in the third grade, where this bill is focused on reading and writing and arithmetic is because we have a bad system of instruction.

And merely putting kids into repeating the class or going to a summer school in the same system is unlikely to really solve the root of the problem. I would suggest the following: if you’re familiar with a methodology of teaching called direct instruction, which is something that Thales Academy has been using to teach reading, writing and arithmetic.

If the state were to implement such a strategy of delivery of curriculum, I think you would see a dramatic improvement in reading, writing, and arithmetic among all K 12 students. Your thoughts on that methodology?

White: Thank you very much, and I appreciate that. You’re really talking our language. And what you’re saying is exactly how I want to use the committee as we move forward. Let’s make sure whether it’s direct instruction as you suggest or let’s make sure we get kindergarten one and two correct.

We should not be having the discussion of third-grade retention if we have the issue of early childhood literacy under control in kindergarten, first and second grades. And so we’re really going to look at the entire picture of what we need to do now.

A couple of years ago, in January 2021, when we passed the Third Grade Retention Law, we also implemented Phonics. We’re putting Phonics back into our system. Our teachers are being trained as well as those who are coming out of college.

So that that’s a plus. Reading 360 and a lot of these things we have in place that are working. So, yes, what you’re saying is let’s get the entire system in place so that we do not continue to talk about third-grade retention.

Leahy: And Direct instruction is a methodology that’s been around since the late 1960s. It is a proven methodology. And I would suggest that you and other committee members would be well suited to go and take a visit to Thales Academy-Franklin, where they use direct instruction and watch how the kids perform. Every single kid that goes there learns how to read and write in kindergarten.

White: Thank you. We would definitely look at that and have those people come in. We’re going to bring all types of experts into what is working as we move forward. I really want to use this opportunity.

We’re going to have several bills filed, legislation filed on addressing third-grade retention, but we’re going to look at the entire picture and not just legislation on whether or not we should have home students back or not.

Leahy: Do you anticipate that there will be a significant change in the current third-grade retention bill in this session?

Some legislation says, well, let’s just turn it back over to the local LEAs. In 2011, we did pass a third-grade retention law, but we left the decision up to the locals. And here we are 11 years later, still talking about it. So that’s not working. I’ll tell you, we need to have a part of the state and we need to step in and we need to make sure we correct this.

White: Yes, they’re all new members, and I know some better than others. That’s what I’m doing. For the next two weeks, the House is on recess while the new members get adjusted and get in their offices. And so I’m going to spend that time not only working on this issue but getting to know some of the new members.

Leahy: When is the House back in session? And when will the Education Administration Committee meet to discuss the Third Grade Retention Act?

White: We’re back in session on Monday, January 30th, and then I’m going to kick off the committee right away. We’re going to meet on that Wednesday, which will be February the first, and probably we’ll kick this off within two weeks of committee in mid-February.