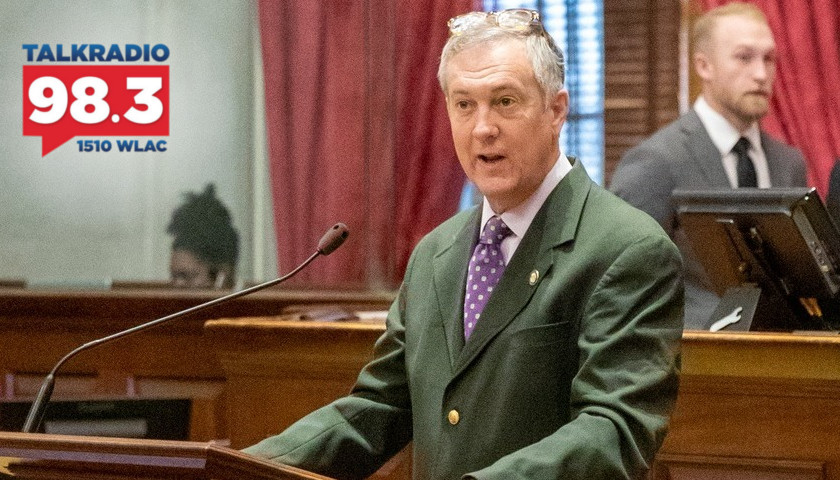 Live from Music Row Thursday morning on The Tennessee Star Report with Michael Patrick Leahy – broadcast on Nashville’s Talk Radio 98.3 and 1510 WLAC weekdays from 5:00 a.m. to 8:00 a.m. –  host Leahy welcomed all-star panelist Clint Brewer in-studio to further comment upon who in the state decides for the filing deadline to be on the GOP primary ballot.

Leahy: And we’re continuing our discussion with Clint Brewer about the communication gaffe of Secretary of State Tre Hargett immediately after the enactment of the three-year residency requirement to get on the primary ballot for the U.S. House of Representatives.

They issued a very conflicting and confusing statement that the Associated Press immediately ran with and claimed that it meant that Morgan Ortagus is going to be back on the ballot. Associated Press got it wrong, and they got it wrong in part because of the screw-up by the Secretary of State’s office.

Brewer: I’m not sure your quarrel is as much with the Secretary of State’s offices as the AP. I mean, it is a nuanced situation.

Leahy: Now, that is exactly the case.

Brewer: Could the initial communication be a little more specific about April 7th versus the 21st? Sure. But I think what you’re seeing is the Secretary of State’s office operating with an abundance of caution since this is a brand-new law. There’s a residency requirement.

For example, if you enroll your kid in almost any school system in Tennessee, you can take them, you know, a utility bill. And so how do you establish what documents are acceptable? There’s a lot of questions that the law doesn’t answer.

Brewer: You’re saying it’s a gaffe. I think it could have been clearer. But I do think there’s some intentionality to the Secretary of State’s office communication in this regard because the law is not entirely clear about who controls the final deadline.

It’s definitely the executive committee. I think this is a one-time event in that the laws passed, it’s put into effect after the filing deadline that leaves some gray areas. I’m not sure it’s a gaffe.

Brewer: I don’t think it’s as much of a gaffe as it is sort of being intentionally cautious …

Brewer: … about what they’re saying. Maybe their attorneys have advised them to be that way.

Leahy: This is why you’re a good communications guy. If I were the Secretary of State, I would hire you immediately. (Brewer chuckles) Because you made the best out of a bad situation for that.

Brewer: I’m just trying to think through their burden in this situation.

Leahy: There are two elements to this. The first, where they made a big gaffe, was by reversing themselves on the issue of when the qualifying deadline was.

Brewer: Or did you just ask a better set of questions than the Associated Press?

Leahy: In fact, it’s almost as if it was a coordinated effort between, oh, I don’t know, the governor, the Secretary of State, and the Associated Press to have a misleading headline. It’s almost as if.

Brewer: I can pretty much assure you that they do not all get together and agree to that.

Leahy: I didn’t say they got together. But a common goal was accomplished by like-minded individuals.

Brewer: What you’re seeing is, again, I think that given the situation, because some of these candidates whose residency is in question … I live in Wilson County.

Leahy: Morgan Ortagus’s residency timeline is not in question. She would be off the ballot.

Brewer: I mean the question in terms of the executive committee process.

Leahy: Well, that’s a separate issue. The executive committee is not about residency. It’s about meeting the standards of having voted three out of the four most recent primaries.

Brewer: Who has to figure out residency?

Leahy: The issue of residency is not before the Tennessee executive committee.

Leahy: The issue of residency is a separate lane. I think you’re right about one thing and wrong about another. The thing that the actual misleading statement from the Secretary of State’s office is to claim that the petition filing deadline of April 7th is a qualifying deadline.

Brewer: So in your mind, the Secretary of State’s office has from the 7th to the 21st to make some kind of ruling on each of these candidates based on residency?

Leahy: No, not at all. No. Let me tell you what my mind is thinking on it. I think it’s very clear that the qualifying deadline is April 21st.

It is after April 21st that it would be the job of the Tennessee Secretary of State to determine if a candidate meets those standards, if they were to be on by the state executive committee, which I think is in doubt at the moment.

But let’s go with that. So here’s what I would say. This is the Robby Starbuck argument versus the Morgan Ortagus argument. The standard on this, if you just take the way that they’ve approached others’ residency requirements in other cases would be the date upon which you registered to vote.

The legislature didn’t spell it out, but you would think, just by the way, that the Secretary of State has acted in the past, it would be the voting deadline.

Brewer: And the piece of code they opened up. Is there any reference in the election law to what establishes residency? 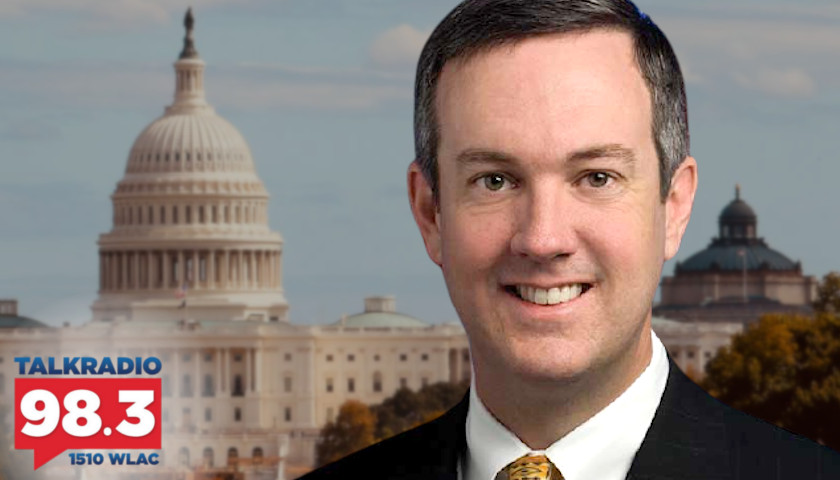 Live from Music Row Friday morning on The Tennessee Star Report with Michael Patrick Leahy – broadcast on Nashville’s Talk Radio 98.3 and 1510 WLAC weekdays from 5:00 a.m. to 8:00 a.m. –  host Leahy welcomed Tennessee Secretary of State Tre Hargett to the newsmakers line to discuss the mechanics of the HR1 bill and the letter written by 15 other Republican secretary of states to Congress in order to stop it.

Leahy: Come Carmichael in studio. And on the newsmaker line with us right now, the Secretary of State for Tennessee. And I’m going to add this, I think one of the best Secretary’s of State of all 50 States in the country. Tre Hargett, welcome to The Tennessee Star Report.

Hargett: Well, good morning. Thank you for having me this morning.

Leahy: So HR1, the federal government is trying to tell states how to run their elections. What do you think of that?

Hargett: Well, I’ve signed on to a letter along with 15 other Republican secretary of state asking Congress to not pass a piece of legislation that really is just an overreach and would take away the state’s constitutional authority to set the time, place, and manner of elections.

Leahy: That’s a very clear constitutional overreach by the Congress of the United States. It has passed the House. What’s going to happen with it in the Senate? What kind of response has your letter gotten?

Hargett: Well, we’re not sure what’s going to happen in the Senate. It feels like it’s falling on partisan lines, but we’re hoping some common sense will reign in the U.S. Senate. and I’m hopeful that your listers, who feel so led will contact friends and relatives and other states and ask them to contact their U.S. Senators to make sure they’re going to vote consistent legislation.

Leahy: When I look at who is on the bubble on the Democratic side, two names come to mind. Senator Joe Manchin of West Virginia and Senator Kirsten Sinema of Arizona. Are those the two senators who have not made a public statement on this or who are in doubt in the U.S. Senate?

Hargett: I don’t know. I haven’t seen a lot of public statements on either side. Of course, in Tennessee, Senator Blackburn and Senator Haggerty had both express their opposition to the legislation. But, you know, things have been pretty quiet on the Senate side. I think they’ve been focused on some other issues. And so perhaps they just haven’t felt led to make statements yet.

Leahy: Why is this bill so bad for Tennessee?

Hargett: Well, great question. And so there are several things I think are just bad for Tennessee. And one of them is it allows ballot harvesting across the country. And you remember a congressional race in North Carolina just a couple of years ago, they had to be thrown out because of ballot harvesting. And a lot of people don’t know what ballot harvesting is.

But that is whenever someone else goes out and collects ballots from other people and then wants to turn them in mass. And the real risk here is that someone could change your ballot or they could just not turn it in. And that’s what happened in North Carolina. The person knew that the ballots were from people who weren’t supporting their candidate.

They collected the ballots, didn’t turn them in. And it was a close race and It made a difference. In Tennessee, our law right now says you have to turn in your own ballot. You have to mail that back in. So you’re not supposed to mail somebody else’s ballot back in or pick it up and put it in a dropbox or anything like that?

Hargett: The HR1 one would make it where we can’t ask for a photo ID at the polls anymore.

Carmichael: But S1 can’t pass in the Senate unless there are 60 votes unless they overturn the filibuster.

Carmichael: In the filibuster kind of the first line of defense? And then Mitch McConnell has said that if the Democrats attempt to overturn the filibuster that he’ll invoke the quorum rule, and he will just tell Republican senators to stay in their office and not go to the Chamber.

Hargett: Well, those are certainly the options. I would leave that to Leader McConnell to determine what the best way to handle that is. I think the best thing, though, for us right now is to start making senators aware of the issue and how we feel about it before it gets too late. And it gets any momentum. Let’s squelch it right now.

Carmichael: Yeah. The Democrats seem to be determined to use their power to insulate themselves against political losses in the future. It’s just really quite mindboggling. Do you have that problem with Democrats here in the state? Or is it because the Republicans have such large majorities that you’re able to work with Democrats, at least to some extent? Democrats in Washington don’t seem to want to work with Republicans.

Hargett: With a few exceptions, I have good working relationships with the Democrat side of the aisle.

Leahy: That’s very Tennessee. You’ve been in office for how long, Secretary Hargett?

Hargett: I’ve been in office for 12 years.

Leahy: 12 years, and no scandals of any significance while you’ve been in office. Thank you for your service, Secretary Hargett.  And thanks for joining us. Come back in the studio sometime If you will.

Hargett: I look forward to it. Thank you.