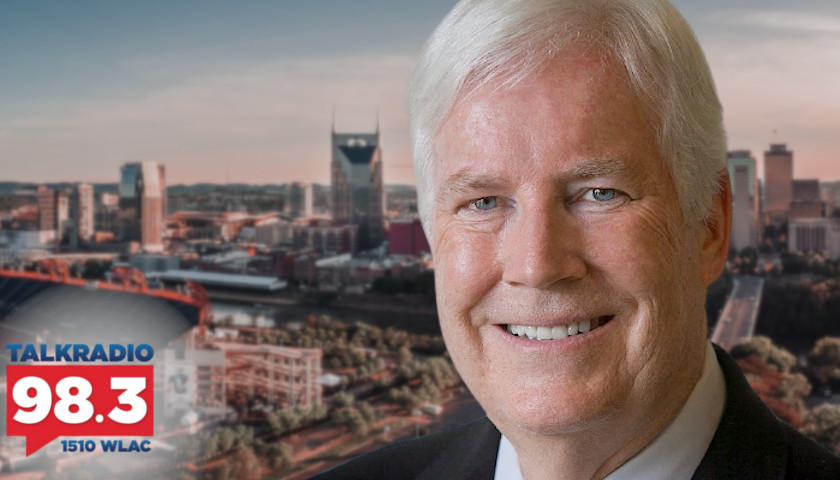 Live from Music Row Tuesday morning on The Tennessee Star Report with Michael Patrick Leahy – broadcast on Nashville’s Talk Radio 98.3 and 1510 WLAC weekdays from 5:00 a.m. to 8:00 a.m. –  host Leahy welcomed Craig Huey of The Huey Report and California Refugee in studio to discuss some of the specifics of why he left California and what might be done to help acclimate new Tennesseans on local government and processes.

Leahy: We are joined in studio by our favorite, California Refugee, Craig Huey. Good morning, Craig.

Huey: Yes. There are just so many it’s just a flood of people coming in.

Leahy: This is a fun program for me to talk about this and how Nashville and Middle Tennessee are in the process of being transformed by the migration of people of various political ideologies but led by conservatives. But there’s also a mix of moderates and liberals from California, Illinois, and New York coming into town.

The real estate markets going to be booming here for years to come as long as we are a state with no state income tax because that’s in our state constitution. And as long as we don’t get taken over by these left-wing lunatics, who all do their propaganda promoters and they’re all over the place are funded by all these left-wing nonprofits. I want to go back to you Craig. And by the way, if you’re if you’re listening and you want to weigh in and you’re and you’re listening on the iHeart Radio App out in California, and you’re looking for a lifeline and you’re looking for a place to land call us at 615- 737-9522.

Or if your recent California arrival here, or if you’ve been surrounded by California rivals. Talk to us. So you have so much information about California and the thinking process. You’re going to explain a little bit about that and what your experience is with people in California and their thought process about the escape to Tennessee and other places.

Huey: Absolutely. It’s such a failed state it California.

Huey: California is a failed State and I spoke probably the 25 different groups before March of 2020. Between January and March.

Leahy: Your move here comes in June of 2020 right?

Huey: I shut down the California operation in May. And moved here in June.

Leahy: Okay, great. So this was before your big Move?

Huey: Before the big move.

Leahy: Had you made the decision to move?

Leahy: January to March of 2020 and you speak to 25 groups. What do you say how do they respond?

Huey: So I ask this one question at the beginning of almost every talk. How many of you are thinking of leaving California? Literally, Michael 90 percent of the people raise their hands. Then I would ask them how many of you know somebody who has moved out of California? Literally, 100 percent of the people raise their hands. The thing that holds them back is fear, lack of knowledge, and family ties in the area.

Leahy: Family ties is one I hear often. And you think about it. Let’s say you’ve got children or parents.

Leahy: Are you going to abandon them to the travails of living in California.

Huey: Exactly. It’s very painful. Some of the employees when I gave them the option to move to Nashville. I sent everybody out to Nashville take a look.

Leahy: So all of your employees yet how many what 30.

Leahy: 25 employees. So I went by and had a talk with our friends at the daily wire last. They’ve moved from California. I went by their offices. They love it here, but they had a similar experience. So you have your 25 employees and you sent them here to look around. How do they respond?

Huey: So they love it out here, but it’s the family who are the ones who didn’t want to leave.

Leahy: It was the family that was the reason and so for those that don’t come who don’t come they have family, but they want to leave then it’s very difficult to figure that out isn’t it.

Huey: Exactly. Gasoline, because the taxes and regulations are an extra dollar fifty a gallon. You’ve got my wife when she got our electric and water bill, she called the water here in Tennessee.

Huey: In Tennessee. She called saying you made a mistake. You didn’t charge me enough because it was so cheap. (Leahy laughs) We have saved it an incredible amount and I better employees less cost. and I gotta tell you when business owners discover what they can do they’ll want to come to Tennessee. when people understand the quality of life. And in my community where I live in Williamson County, most of the people are from out of state. And those who are out of state most of them are from California. business owners and people who have moved to flee the regulations and the fear that’s in California.

Leahy: Because they’re more likely to think like us.

Leahy: If they’re a business owner.

Leahy: Now in contrast an executive at a Fortune 500 company is probably not going to think like us.

Huey: Yeah, so I know it’s a worry and it’s got to be a worry and it’s a legitimate worry. Honestly, the people that I talk to and have not found that there is a collectivist status liberal type of mentality coming. I have seen the consistency of people have different shades of wanting to vote conservative. Not vote for any type of socialist program. So I know the worry. I haven’t seen it.

But it is something where I think it’s to the benefit of Tennessee to bring in the right people. And you can do that. If you’re a real estate agent, there are people who are marketing homes and communities just in California. And they get a Facebook ad so anybody that searching for leaving California. Or searching for something in Texas an ad can pop up for Tennessee. So we’re going to have to add introduce you to Rumble too and Clout Hub and all those alternatives so we can use those as well.

Leahy: So let me ask you this. Instaundit.com. Glenn Reynolds. Great guy professor of constitutional law at the University of Tennessee. He had this concept that we ought to have a Welcome Wagon package for folks. So having arrived here what kind of a Welcome Wagon set of information would you find you have found helpful?

Leahy: And so when you say change from California, give us some more details on that.

Huey: Sure. So in California, we have the city council and we have County Supervisors. We have assemblymen and state senators. And then of course all the bureaucrats.

Leahy: There is a lot of them.

Huey: A lot of beurecrats. We just do not know Tennessee governance and how it operates. We looked at Williamson County and and and and a Davidson County figuring out who are all these people?

Leahy: What do they do.

Huey: Yes. What are they doing?

Leahy: Have you been able to do the change in registration for your car yet? Have you succeeded?

Huey: We have not.

Huey: My wife is my wife went down during the pandemic to try to get it changed and she couldn’t get the appointment. Then she goes down. It’s an hour wait and she finds out it’s not the DMV. She has to go to a different location.

Leahy: She has to go to the county?

Huey: She goes to the county to another building and it’s an hour wait line and she can’t do it. She comes back another time can’t do it. She comes in line and she finds out that the dealer has to have a letter agreeing to the change of registration and it’s not on the website. She never was told this. After waiting in line she has to go back and we have to deal with the dealership. So we’re still working on it.