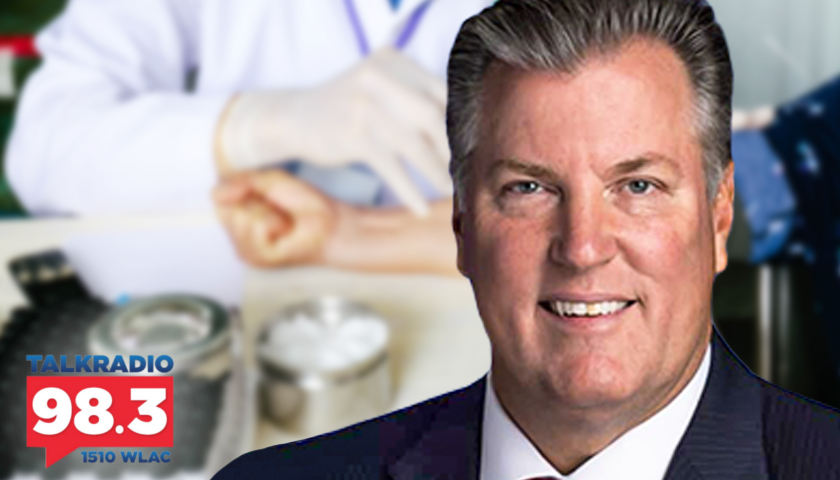 Leahy: We are joined on our newsmaker line by my very good friend, State Representative Scott Cepicky from Maury County. Welcome, Scott. Thanks so much for joining us on such short notice.

Leahy: Can you help us unravel this statement yesterday from Lisa Piercy who is the department of health commissioner that was talking about the guidelines for monoclonal antibody treatments?

Even if you test positive for COVID-19, but you’re vaccinated, you don’t get it. (i.e. the monoclonal antibiotic treatment.) Now, what on earth did she say? Does it make any sense? Can you help unravel that for us, Scott?

Cepicky: I don’t know if I can help unravel something that’s impossible to understand. I think you have to look at the beginnings of all this.

Ever since coronavirus hit the continental United States, most of our leaders, the CDC, have been wrong in their diagnosis, including our own department of health who has been very misguided in their programs to help control the spread of a virus that’s really uncontrollable.

And instead of sending them to the state that we’re using them the most to treat patients to help them get over COVID, they wanted to treat all the states the same, even states that really weren’t using them that much and giving them all the same allotment of the monoclonal antibodies. So we’re now in certain states, these are sitting on the shelves, not helping anybody.

Cepicky: To where we could be using them here in Tennessee. And like you said, I represent Maury County. Maury Regional Hospital.

And so people are coming in who are sick and right now are being turned away because they don’t have the antibodies to give them.

Leahy: So here’s my question to you. Why can’t Maury County hospital go directly to Regeneron or Eli Lilly to make this stuff and buy it and just circumvent the federal government? Why can’t Governor Lee do that? What are your thoughts on that?

Cepicky: That is 100 percent accurate. That is one of the things that we’ve been talking about in the halls of Cordell Hall up in Nashville, encouraging Governor Lee to talk about that and go ahead and bypass the federal government contract directly and get these monoclonal antibodies from the manufacturer so we can make sure the people of Tennessee have the best medical care available to them.

And that’s one thing we’re going to encourage immensely with our governor and with the Department of Health. They have the money to bypass the federal government and do what’s right for Tennessee.

Leahy: Has the governor responded to that request? What do you think? What has he told you?

Cepicky: From what I understand through the back channels is that that’s being looked at right now, trying to bypass the Biden administration. And let’s make one thing clear here.

This is the Biden administration who’s targeting Tennessee. They are targeting red states right now. He made a statement the other day and a singled Tennessee out for the way our governor is responding to his executive orders.

Tennessee is being targeted by the federal government. They’re trying to make life as difficult as possible for us, and we are not going to stand for that. We are going to defend Tennessee to the best of our ability.

Leahy: Why does it take the governor more than 24 hours to make this decision? If he’s got the money, why doesn’t he place the order with Regeneron or Eli Lilly like today?

Cepicky: Unfortunately, Michael, I don’t hold the title of governor. I’m just a representative up there, but we are encouraging our governor and our leadership to reach out right now.

And, most importantly, this is something that Dr. Piercy should be taking the lead on right now. Her job is to protect Tennessee in health crisises.

One could argue we’re in a health crisis here with these monoclonal antibodies. She should be doing everything she can to secure the necessary medicine for our citizens.

Leahy: But she doesn’t seem to be doing anything except saying, “If you’re vaccinated, you don’t get the monoclonal antibodies now.” That’s what she said. Apparently, according to this Epoch Times article.

Cepicky: We call that medicine rationing, and we don’t do that in Tennessee because we have the means to not do that.

Leahy: Apparently, Lisa Piercy, the commissioner of health thinks we do.

Cepicky: Sometimes we have to disagree with the commissioner, and, you know, I’ve done that on a couple of occasions where we’ve called them out on their policies and procedures.

Maybe they need to take another look at this and before the General Assembly has to chime in and just make this right and fix it as quickly as possible.

Leahy: What are the odds of that happening?

Cepicky: (Chuckles) I wish we were in session right now because we have a little bit more authority to wield. But I know that government operations will probably be addressing this next month.

I know Chairman Reagan on Gov. Ops and Chairman Roberts are very concerned about this. And I would not be surprised if this is not rectified very quickly, that by the time we get to the government Operations Committee next month I’m sure this will be front and center.

Leahy: Crom Carmichael has a question for you, Scott.

Cepicky: So it depends on who calls it. If the governor calls the special session, he has the ability and the authority to limit the call to precisely what the governor wants to address.

If the General Assembly calls the special session, it is open to any bill that we want to consider. It’s basically like we’re coming back into a normal session and we’re going back to work.

Leahy: So have you asked Governor Lee to call for a special session? And what did he say to you?

Cepicky: Well, I haven’t talked to him directly on that. Speaker Sexton sent that letter with the 72 Republican representatives from the House calling for a special session by the governor.

I would much prefer to have the latitude to address the COVID issues and the liability issues with our businesses and the mask mandates.

School issues and this monoclonal antibody issue. I would much prefer that the General Assembly calls itself back into session so that we can take up a multitude of issues and address them all at one time.

The lieutenant governor, the speaker, the Senate, and the speaker of the house send a letter to the governor saying, two-thirds on both houses. We’re calling a special session.

I know Speaker Cameron Sexton wants to do it, and every member of the Republican talks wants to do it. But in the Senate, it’s a different story.

Cepicky: I think every day when you add this monoclonal antibody issue on top of it, of all the other issues that we’re facing in Tennessee right now, I think the pressure continues to mount on our Senate colleagues to get us back into session.

And, Michael, the thing that’s really perplexing is you saw that letter from Speaker Sexton, who represents the entire House of Representatives.

He’s the Speaker of the House. It’s very perplexing to me that not one Democrat signed on to at least coming into session and having these discussions on our schools and on mask mandates, etcetera, etcetera.

That’s the most perplexing thing is we can’t even get the other side of the aisle to step up to the plate and say, hey, let’s at least come in and have these discussions.

They don’t have to vote for the legislation I if they don’t want to, but at least come in and have the discussion that the people of Tennessee want.

And in the Senate, I hope we can continue to apply as polite of pressure as we can to begin with. But there comes a point in time when you got to do what’s right.

And I think it’s time for us to get back into session through the General Assembly so that we can talk about the issues that we need to talk about and then get legislation going to continue to move Tennessee forward.