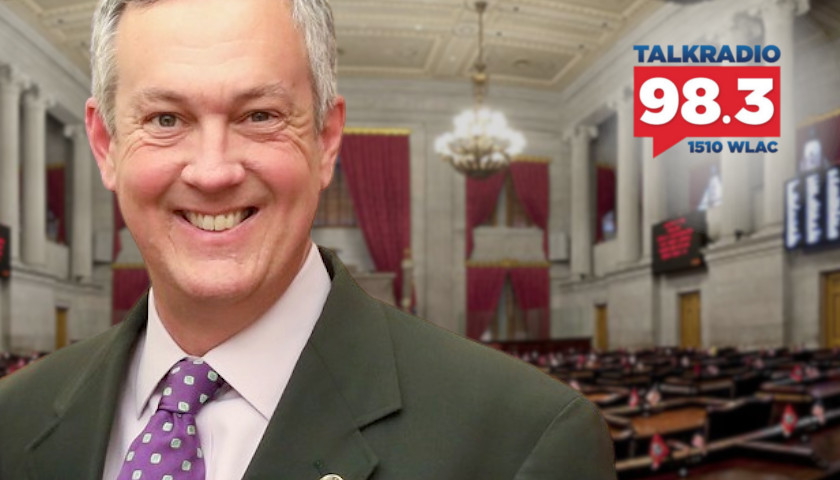 Live from Music Row Thursday morning on The Tennessee Star Report with Michael Patrick Leahy – broadcast on Nashville’s Talk Radio 98.3 and 1510 WLAC weekdays from 5:00 a.m. to 8:00 a.m. –  host Leahy welcomed all-star panelist Clint Brewer in-studio to give his take on the statement made by Secretary of State Tre Hargett in regard to the three-year residency bill signed into law April 13th.

Leahy: Folks, this promises to be a very lively segment with our good friend, all-star panelist, Clint Brewer. Clint, you are, in fact, a recovering journalist.

Leahy: You are a public affairs specialist. And you know how people should communicate. I’m going to make a statement here about our Secretary of State, Tre Hargett.

And I’m going to say that he has really done a very poor job of communicating about whether or not he will enforce this new residency law, which became law yesterday afternoon after the governor refused to sign it or did not return it to the Senate after the 10-day period when it can go into effect without a signature.

And immediately, the Secretary of State issued a confusing statement that contradicted his own statements about the enforcement of this law that he made to us a couple of months earlier, issued it quickly.

We broke the story that it had become law about 3:00 in the afternoon, and by 4:00, they issued a statement to us about the law that we thought was contradictory and confusing. And we didn’t publish it because we asked them a follow-up question.

The Associated Press took it immediately and ran with it and I think inaccurately stated the position of the law, what the law meant.

Here’s what the Secretary of State’s office told us an hour after we reported the law was in effect. Remember what the law says. “In order to qualify as a candidate in a primary election for the United States Senate or from a member of the U.S. House of Representatives, a person shall meet the residency requirements for state senators and representatives contained in the Tennessee Constitution.”

That’s three years prior to qualifying for the primary ballot. This act takes effect upon becoming law. The public welfare requirement. So it became law yesterday, April 13th, and it went into effect.

And here was the statement. It was a pre-planned statement, obviously, because it was given to us. We didn’t publish it immediately because it was confusing and conflicting. The AP took it and published it right away, almost instantaneously, and gave an interpretation to it that claimed that it meant Morgan Ortagus would be back on the ballot.

They missed a lot, as did the Secretary of State. Let me just read this to you. “The bill was not signed into law before the April 7th filing deadline.

The requirement does not apply retroactively to candidates who met the qualification deadline at noon on April 7th.” So that’s what they communicated.

The AP took that to interpret Morgan Ortagus is on the ballot. That was very, very confusing, because we went back and said, well, look, the Republican Party bylaws, and your previous statements say April 7th is the petition filing deadline. It’s not the qualifying deadline.

The qualifying deadline is April 21st. Two candidates have been challenged, and have been removed from the Tennessee Republican Party ballot, Morgan Ortagus and Robby Starbuck. Given those facts with your interpretation of the law that you gave out an hour after the laws passed, stand.

And they responded in a way that didn’t answer that question. Here’s what they said: “We may have misunderstood your question. We thought your question was regarding if someone filed the petition in March and met qualifications when they filed, but before the qualifying deadline, the law changed. In that case, the person would not have been able to run despite meeting the petition requirements at the time of filing.

By statute, the party has until April 21st to inform the division of election who will be on the primary ballot,” conceding the point that the qualifying deadline is April 21st, not April 7th. Your thoughts about this communication mangling by the Secretary of State?

Brewer: Yes, I agree with you. It could have been clearer. I’m going to say that they’re in as confusing a position as the rest of us. Heretofore, to qualify to run for Congress, you had two barriers: One, you had to put in a qualifying petition, which is a fairly nominal number of signatures from people in the district that have to be verified as actual registered voters in the district.

Then you had to clear the party. The party had to let you on the ballot if it’s partisan. So there are two things. Now, in the middle of it, we’ve got a residency requirement, which to my knowledge, I think the only entity that figures that out now is the party apparatus, the executive committee, Secretary of State’s office.

I could be wrong. But in the petition filing, there is no paperwork requirement yet. Maybe there will be. There’s no submission that you have to make of documents or anything that actually could tell the Secretary of State’s office if you meet the new residency requirements.

Leahy: Yes. Within that. Yes.

Brewer: So where does the verification of residency reside in this new process? The law does not spell that out.

Leahy: It does not.

Leahy: Let’s just go back a little bit on this. First, this April 7th petition filing deadline says you’ve got to file in order to be qualified, subsequently …

Brewer: You have to have a timely filed petition …

Leahy: Which has 25 signatures of people in the district.

Brewer: … by noon on the date.

Leahy: April 7th. Now, those petitions are actually reviewed by the Secretary of State’s office …

Leahy: … over like a 48-hour period. If they themselves then, after April 7th, issue a statement about which of those petitions allow somebody to go forward with the qualifying process …

Brewer: And to my knowledge, is there a deadline for doing that?

Leahy: For their response as to have you met the first standard to qualify, there’s not a deadline. I think by practice they usually get a response. Actually, there may be some still being reviewed by the Secretary of State’s office. They did respond.

Brewer: But it’s not in the statute.

Leahy: I don’t think it’s in the statute. But what is clearly in statute, by statute, the parties have until April 21st to inform the Secretary of State who’s on the ballot.

Brewer: That is the final hurdle to get on the ballot. 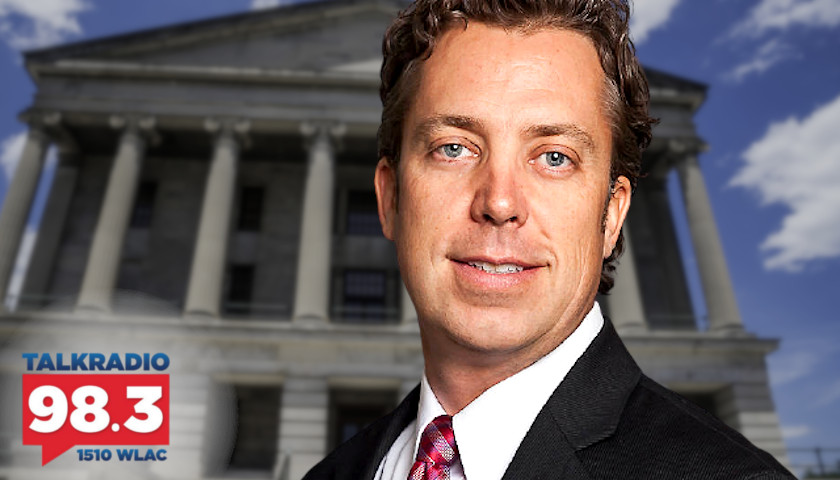 Live from Music Row Tuesday morning on The Tennessee Star Report with Michael Patrick Leahy – broadcast on Nashville’s Talk Radio 98.3 and 1510 WLAC weekdays from 5:00 a.m. to 8:00 a.m. –  host Leahy welcomed Maury County Mayor Andy Ogles in the studio who reviewed the Tennessee Constitution by articulating the specific guard rails of which the governor may exercise emergency powers.

And it says, “Their qualifications and duties shall be prescribed by the General Assembly.”

Period. And that’s it.

And Mark Pulliam, you’re an attorney you can talk about the importance of where the period are where the comma is in a sentence. But if you any question or doubt as to who has domain over your constitutional officers in the counties the next sentence, the last sentence of the paragraph states any officer shall be removed from malfeasance or neglect of duty as prescribed by the General Assembly.

Ogles: The governor has the powers or it’s the voters during an election or it’s the general assembly. Period. That’s who gives me or takes authority as county mayor. Now when you go to 58 – 2107 that’s the Emergency Powers Act. It states very clearly that an executive order as prescribed by the governor has an effect of the law period. It just says it and it says such executive orders proclamations and rules have the force and effect of law. However, under 58 – 2107 there’s some caveats.

And they are lettered and numbered. And when you get down to H, it talks about those dang constitutional officers again. I’m a subdivision of the state of Tennessee. And it says the governor can delegate new authority to me. And again the words matter. And again Mark you’re an attorney so you can speak to this. But prior to an emergency or threat of an emergency. In other words before. I can’t be given a new authority during a state of emergency.

Why? Because the General Assembly has the final say. And so one would presume that under a state of an emergency your General Assembly could not meet and could not affect their duties there go any new authority granted to me must fall under their domain, not during a time where the governor has assumed total authority. And so it’s nuanced. It’s nerdy. It’s convoluted. I get it. But it is in black and white. And if you take the time to read it, you’re like, holy crap.

Leahy: So how then does the governor have the legal authority to give county mayors the right to determine whether or not masks will be mandated or not.

Leahy: I don’t think he does either.

Ogles: A mask is by definition by our federal government is now considered a medical device. As a county mayor have no authority under the law of the state of Tennessee to prescribe a medical device.

Pulliam: Well, we have constitutions for a reason. They are the rule book of how elected officials interact with each other, what powers they have, and which powers they don’t have. And we have to take these rules seriously because if we don’t take them seriously, then elected officials can do whatever they want.

And a lot of people and this was probably the worst thing that came out of this COVID crisis is people sort of saying well, this is different. This is an emergency. We don’t really have to pay attention to the rules. Well, it’s exactly when you have a so-called emergency that the rule book becomes especially important because in normal times we can trust the government. But not an emergency.