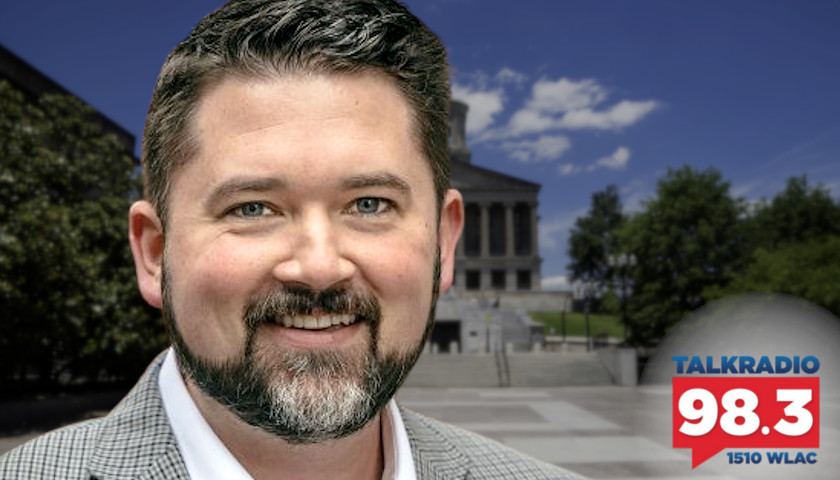 Live from Music Row Thursday morning on The Tennessee Star Report with Michael Patrick Leahy – broadcast on Nashville’s Talk Radio 98.3 and 1510 WLAC weekdays from 5:00 a.m. to 8:00 a.m. –  host Leahy welcomed Gary Humble of Tennessee Stands in studio to talk about what it’s like at the Tennessee State capitol as a grassroots activist and intermingling with members of the House and Senate.

Leahy: We are joined in studio by our good friend Gary Humble, the group Tennessee Stands a grassroots organization. He is a thorn in the side (Humble chuckles) of the Republican establishment and all of the Democrat folks up on Capitol Hill. Gary, good morning.

Humble: Good morning to you. I’ll take that intro all day long.

Leahy: Now, have they lifted all of the Coronavirus regulations? Are regular people able to go into the capital now?

Humble: Yeah, they are pretty much, but it’s just like everywhere else. It’s sort of the fine line between there’s a rule, but we’re not really sure if there’s a rule. And once you get past a certain point to the elevators, we’re not really going to enforce the rule. And then as you walk around, there’s a few of our truly, I would say conservative, freedom-loving legislators that you’ll never see with a mask or anything like that on. And it’s literally like walking into the grocery store and sort of seeing who it.

Leahy: Some are, some are not.

Leahy: But is there a rule now? Do you have to wear masks there?

Humble: The rule is, well, again, like everywhere else, the rule is to wear a mask, but it’s rarely enforced.

Leahy: Okay. Well, so now you go up there, in essence, acting as a grassroots lobbyist, right? For various bills.

Humble: I have not registered as a lobbyist, though I could. But I choose not to participate.

Leahy: You are an advocate.

Humble: I’m an advocate. I’m a citizen of Tennessee. That’s a better word to describe it.

Humble: It’s usually me and a couple of folks. We have someone that comes up from Knoxville pretty regularly. And then a couple of volunteers that actually have been lobbying some of these, especially medical freedom issues that we’ve been addressing right now for the last couple of years. So we do have some volunteers up there that are lobbying at least every Tuesday and Wednesday, which is how much the meet of the week.

Leahy: So set the stage for me. You enter the security. Do you show your ID when you get in?

Leahy: As you enter, do you have your mask on?

Humble: No. So far, that’s worked.

Leahy: So they don’t give you a hard time.

Humble: Let me tell you, the Capitol Police, there are phenomenal people. In fact, when we had our rally there and we had about 350 folks or so show up, I worked with them the week prior, letting them know that was going to happen. And they’ve bent over backward upping their staffing so that they can process as many people as they could let into the building. They are quite incredible to work with. Good men and women.

Leahy: Now, do the legislators up there recognize you yet? And when you’re walking through the halls, do they see you and then head recover?

Humble: I actually have gotten where the eyes meet.

Leahy: Eyes meet and somebody disappears?

Humble: And there’s the look away.

Leahy: It’s Humble with the Tennessee Stands. I’m getting out of here. Any of that?

Humble: Please, God, let him not recognize that I saw him. (Laughs)

Leahy: Okay, so you got a little that going on. But you’re nice, right?

Leahy: You are polite. You don’t harangue them or do you?

Humble: I got a good story for you.

Humble: Because you can tell there’s a conversation happening about me there and whatever. So I’m having a meeting and I’ll just call him out. He’s a great guy. Chairman Vaughan from Collierville. We were having a meeting about a bill. Fantastic guy. Lovely conversation. And I think it seemed to me he had a set of expectations.

Leahy: Which House is this?

Humble: He’s a rep out of Collierville on Memphis area and a great guy. We’re having a conversation. And anyway, we get done. He said, You know what, man? I just got to tell you, this is not what I expected. This is a really great conversation. He said, you know what? You’re a lot smarter than I thought you’d be.

Leahy: Subtext. I expected a crazy loon, and I got a guy who could make an argument and make sense.

Leahy: Well, but this is sort of a lesson for everybody out there in our listeners. What conservatives and constitutionalists and grassroots activists in our listening audience and around the country have to deal with is despair. And that’s a little bit what the left is trying to do. They’re trying to shock and awe us into submission, and it ain’t going to happen. But any logical person has got to say, I have to have a path out. I have to have somebody who’s going to listen to me. And when you see people saying, well, I’ll give you an example.

The Georgia runoff elections, right? Two Democrats won. They’re awful. They’re left-wingers. But what happened is the Georgia Conservatives were so dispirited and angry at the bad decisions by the governor, the Republican governor, and the Republican Secretary of State they said, yeah, I’m just not gonna play this game. It had a bad consequence in Georgia. And for our conservative populist friends out there, it would have a bad consequence here if you’re not engaged, but you cannot rail at the moon.

Leahy: You can’t come in and have them say, oh, there’s that lunatic. Oh, there’s that intelligent person who actually makes an argument. All right. I’ll talk to him or her.

Humble: And there’s sort of a balance there. I believe there’s a line between making an intelligent argument, which certainly you need to make, but also being heard. Unfortunately, what you’ll find and it’s not just the Tennessee General Assembly, it’s in any legislature in any political arena is that a lot of these men and women respond to pressure.

Leahy: Well, they all do. (Humble chuckles) This is why, actually, you see the left, because all of the activists on the left appear to have jobs where they’re paid for by these nonprofits funded by left-wing billionaires. On our side, it’s basically volunteer stuff. So you have to do it in between making a living. So they’re able to be more persistent and to get in the face of state legislators, typically more vociferously than our side in here in Tennessee.

Humble: I had Steve Deace mention something about that one time and he was like you know why it seems like sometimes the left is always added, and they’re always winning it’s because it’s their religion.

Leahy: Not only is it their religion but because of the way the left finances this with the guilty, autocratic, let’s destroy American billionaire class, which is growing, by the way, those guys fund the activities. It’s a profession now. A community activist is a profession on the left, and it’s a well-paying profession. That’s the difference right there.

Humble: We have some activists that are working in Memphis and they are seeing some of the same things. She’s actually been able to scope out who these people are. And she was telling you, no, Gary, what I found is they’re actually paid quite well.

Leahy: Because there’s so much money out there from the left-wing billionaires who hate America.

Leahy: That’s very interesting. I want to ask you this. As you go up there and you talk to members of the Tennessee General Assembly, is there a difference between talking to a member of the House of Representatives in which there are 99 members? And it’s generally considered a little bit more raucous because they are all in there for two-year terms. And then the more stayed state Senate, which has only 33 members and they’re in there for four-year terms. What’s the difference in terms of communicating with a state Senator versus a member of the state House?

Humble: Actually, that’s a great question. I don’t know a person that can have experienced much of a difference. I will say on the Senate side, they actually can be a little bit more rushed and busy and moving papers because, in the House, each representative is limited to running 15 bills. The Senate is unlimited. I want to say, Senator Bowling, I can’t remember who I was talking to but they had, like, over 70 bills.

Humble: 70 bills that have just been filed by her in the Senate because there’s no limit there. So, actually, on the Senate side, there is a little bit more movement. A little bit more business going on because with everything they have to get through.