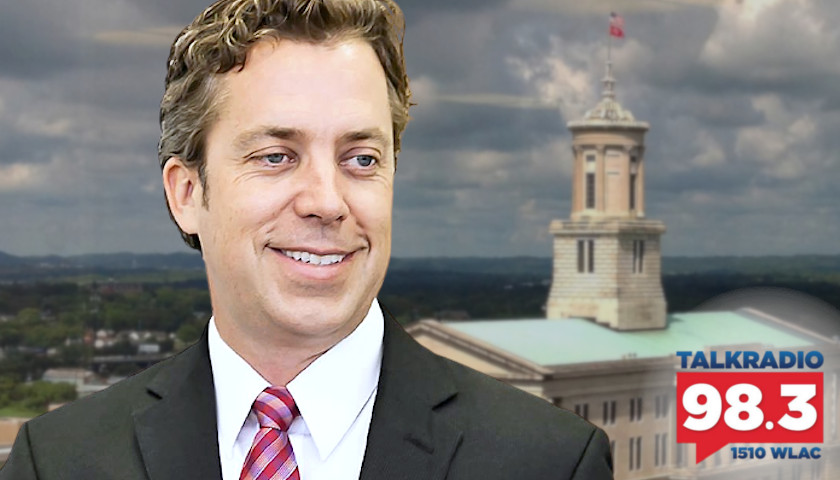 A Mayor for All Citizens: Maury County’s Andy Ogles Talks About His Bi-Partisan Role and Abuses of Emergency Powers

Live from Music Row Tuesday morning on The Tennessee Star Report with Michael Patrick Leahy – broadcast on Nashville’s Talk Radio 98.3 and 1510 WLAC weekdays from 5:00 a.m. to 8:00 a.m. –  host Leahy welcomed Maury County Mayor Andy Ogles in the studio to talk about what’s important about being a mayor and the testimony he will provide in the General Assembly regarding the exercising of emergency powers during COVID.

Leahy: In studio with Maury County Mayor Andy Ogles. Andy,  I’m telling you when we have the live stream video camera where everybody can see what’s happens off-air. What happens off-air is a little bit more fun. Well we have fun all the time.

Ogles: We have conversations with jokes, we laugh. Of course, when you come and came in at the break, we were literally cutting up 30 seconds ago. but that’s what that’s part of the fun. Of course, you’ll have to shave.

Leahy: I know. This is why it takes a skilled to run for public office and part of the skill is you have to like get up and you know fix yourself up and look good every day. I’m way past that. (Laughs) I just can’t do it every day, but when we get the video stream we’ll have to do that.

Ogles: I’ll take issue with that. I don’t know that running for public office takes skill. I think you just have to have… a problem. (Leahy laughs)

Leahy: It’s not a problem. You have to have a commitment to a set of ideas. And you have to be persistent. I think. What would be really hard for me is as it’s just you and me talking right? You know when you’re in public office and this is one of the reasons because there was a period of time when I was a kid, I was certain I would be president of the United States. I was certain then as I became an adult and I saw what you have to do to be elected and then when you’re elected here’s the problem.

And you’re very good at this, but I would not be good at this at all. You have a duty to every single resident of Maury County. Every single resident of Maury County can come up and asked you something and you have a duty to respond to that right? You have to be a very patient and kind person to do that. And I’m not that patient. And I’m sometimes not that kind unfortunately.

Leahy: And even if there’s somebody in Maury County who absolutely is let’s say even if far lefty or just somebody that just doesn’t like you right you still have a duty to that person.

Ogles: But you know when you’re making decisions I’m looking at what’s in the best interest of the whole. And sometimes whether it’s the radical left or perhaps at times they even the radical right they can be the loudest voices although they’re the minority of the voices. It’s a small fragment of the 100,000

Leahy: But they’re enthusiastic and vocal.

Ogles: That’s right. And you see elected officials cave to this very loud voice that represents a very small portion of society. And you see that happen at the local level at the county and then all the way up to national politics. Look at the Democratic Party and how it’s been hijacked by a very vocal left that doesn’t represent most of America.

Leahy: I was on a call with somebody very well known and they said let’s face it. The Democratic party is run by an insane 10 percent of the population. And my words, not yours. But yes, they’re loud and they’re insane and because they’re loud and repetitive now we have a lot of insane things happening as part of public policy. Now, you mentioned something interesting that you actually are going to be testifying before the Committee of Tennessee General Assembly later today. What will you be testifying about?

Leahy: So let me just stop. You when you say that the governor has delegated emergency powers down to mayors of counties.

Leahy: Is there a legal authority for that delegation?

Ogles: There is yes, and no. It depends on the timing and words matter. We’ve talked about this before on the show. State law, the TCA code, Tennessee code annotated.

Leahy: Whenever you see something like TCA with the little squiggles and then the numbers that’s the actual law of Tennessee. Tennessee code annotated means every law that’s passed then is put into a structure and given a number and a title and that’s how you know what the law is today. It’s updated every year.

Ogles: That’s right. The law, the TCA code is a contract between your government and the people of Tennessee. And so words matter. There’s a whole section of the legal profession that is based around contract law. And so you have in state law a phrasing that specifies when during an emergency the governor can delegate powers.

And it has to be prior to or threat of an emergency. And again, I know that’s kind of nuanced but it’s significant. And the reason is is that only the general assembly can give me my authority, not the governor. And so what we’ve had is during COVID and in the name of COVID to save the world, we violated state law and nobody’s done anything about it and I’m quite upset about it.

Leahy: And you should be because it gets back to this. What is the nature of the contract between citizens and the government? It is the rule of law.

Ogles: And I would say that they’re the guardians of set law. And so at any point in time and you look at history that when the contract with the people the subjects you want to hire subjects of the government t becomes one-sided are the guardians who are there to enforce and protect the law to make sure that the laws are applied evenly and inappropriately suddenly can change those at will and abuse them at will you no longer have a contract right?

We’ve slipped into this totalitarian type of mentality in the name of COVID and during of all the laws of all the times your emergency powers law should be carefully constructed and reviewed. If you’ve ever been in the military or in law enforcement after you have an engagement. There’s an after-action report to look at how you engaged.

Leahy: I agree entirely with that. Have you testified before the Tennessee General Assembly ever before?

Leahy: What is that like? How does that happen? How much time do you have? Are people nice to you? Are they mean to you? Do they yell and scream at you? Or do they listen politely?

Ogles: You could always have a committee hearing that goes sideways, but that would be the exception, not the rule. It’s very orderly and typically they’re asking questions. You may have someone who’s passionate about an issue but this is pretty straightforward. You’re talking about the legal construct. The words are in black and white. It’s really not up to debate. And I think what you have is you have some folks whether being the general assembly or maybe perhaps advising the governor that just isn’t familiar with the law and exactly how it’s written, whereas I am.

Leahy: So when you go up there, they have separate committee rooms right?

Leahy: And typically you wait a period of time right before the chairman calls you in?

Ogles: Yeah, so you’ll have the state representative or state senator that’s the sponsor of the bill and the sponsor will get up and give a presentation to the chairman.

Leahy: Typically when a bill is introduced it has a sponsor and then it is assigned to a committee. And it’s a committee that decides whether to move it out or kill it.

Ogles: It has a life cycle if you will. It goes from subcommittee to full committee. From there it will be calendars or calendar and rule then it would go to the floor etc. But during that process of evaluating the details of the legislation sometimes you’ll have sponsors of a bill that will bring experts or just key witnesses in. Almost like a courtroom to give testimony to the validity or invalidity of a piece of legislation.

Leahy: And as a county mayor you would be an expert on the emergency powers.

Ogles: And how it was applied.

Leahy: And how it was applied.