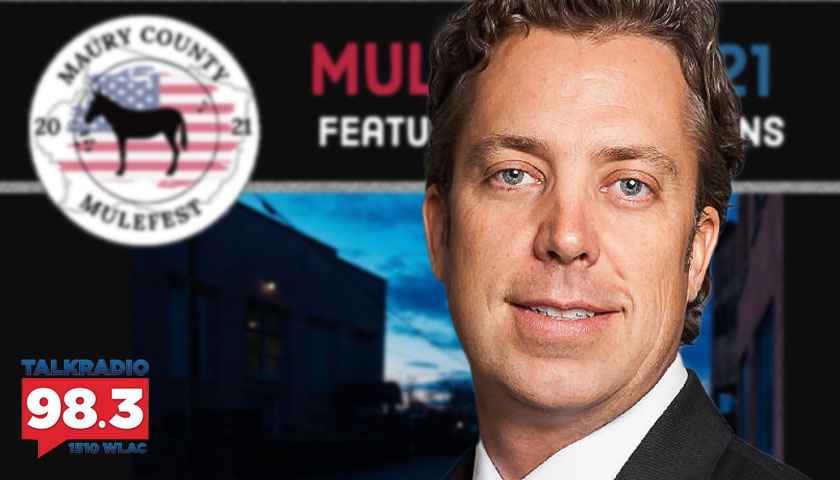 Leahy: We are joined in studio by our good friend Andy Ogles, Mayor of Maury County. That bastion of freedom in Tennessee. Now, speaking of freedom, I can’t wait. I got to hear all about this. MuleFest is coming to downtown Columbia this Friday. (Deep voice) Trace Adkins.

Leahy: Trace Adkins. I can’t do that voice.

Leahy: Only one person can do that voice.

Ogles: Trace Adkins is distinct. So we went to this little restaurant a few weeks ago, and, of course, he’s a big fella. He’s kind of hard to miss.

Ogles: Something like that. So you are hanging with Trace.

Scooter: What I tell ya? I feel like it.

Leahy: He can feel it. So you’re hanging with Trace? (Laughs)

Ogles: One of the nicest people that you’ll ever meet.

Leahy: And he lives in Maury County? Where does he live?

Ogles: He actually lives in Williamson County and during COVID and the way that Davidson and Williamson and some of the other more liberal counties bent over to COVID (Leahy laughs) he came down to the bastion of freedom.

Leahy: Bend over to COVID. (Laughter) No, that’s a good phrase. You are on a roll with phrases today Andy Ogles. (Laughter)

Leahy: They know. So there he is. You hear him speak. It’s Trace.

Leahy: So now how did you become pals with Trace Adkins? What’s the story there?

Ogles: Well, during COVID, he started coming down to Maury County and just kind of fell in love.

Leahy: And what’s not the love in Maury County, though?

Ogles: Well, I’m biased. I grew up in Franklin. My wife and I did a dated in high school.

Ogles: Well, it was very rural back in the day. A lot of people see Franklin today, and it’s a cool town, don’t get me wrong, but it’s not the town I grew up in. It was kind of a Mayberry community, very rural, with a lot of cow fields and pastures.

But Franklin outgrew us, and we moved further South. My great-grandmother was born in Maury County in 1904. My grandmother 1924. So I had roots in Maury County. So it was familiar. And our son passed away a few years ago, our third child.

And if there’s ever a time when you’re going to do something kind of radical, because if you had asked us prior to that, would we ever leave Franklin? I think the obvious answer would have been no.

But we’d always talked about buying a place a little slice of heaven, raising the kids on the farm. And it was that moment we took inventory of life and said, you know what, if we’re ever going to do this, we need to do it now. And we did. And we’ve never looked back.

Ogles: There was a Mom’s for Liberty meeting at The Factory.

Leahy: We covered it.

Leahy: Big crowd, basically talking about, in general opposing of the imposition of Critical Race Theory in the curriculum of Williamson County schools.

Ogles: That’s right. And let me tell you, so the moms, in particular, are disproportionately women. I was at the meeting, they’re fired up. And I think you’re going to see, of course, we mentioned MuleFest, but we kind of move past it and we’ll come back to it.

Leahy: We’ll come back to MuleFest. We got a full hour.

Ogles: That’s right. Well, I think there’s the potential across the state of Tennessee. And I’ve been traveling the state quite a bit here lately, primarily between Knoxville and Jackson. So the edges of East and West.

Leahy: The edges of East and West.

Ogles: In Middle Tennessee, and there’s a lot of angst, there’s a lot of frustration. And pretty much wherever I’m going going to speak, it’s 100 and 250 people showing up on a Tuesday or Wednesday or Thursday night, and they are frustrated.

And so I think you can see across Tennessee something building that if you have a candidate that’s primaried, whether it’s school board or County Commission or Alderman or state rep, that you’ll see a wave, a change over against incumbents.

Leahy: And that’s at the local level because in many cases, the local school boards have gone woke.

Ogles: That’s right. And I think there’s this, again, this sense that the legislature, we have a Supermajority in the state of Tennessee, hasn’t done enough and hasn’t taken the necessary measures to protect our children from a whole host of issues, whether it’s LGBTQ curriculums or transgender issues or CRT. Only 34, 35 percent of kids read on the level in the third grade. We’ve talked about that before.

Leahy: Which, by the way, you would think, Andy, that would be the job of the Tennessee State Department of Education to make sure that, oh, I don’t know, kids at the third grade, 100 percent would read at a third-grade level.

Ogles: Right. But what we’re doing is we’re pushing wit and wisdom, which is the foundation of CRT.

Leahy: I think isn’t a big champion of that Penny Schwinn, the Commissioner of Education?

Leahy: What I think is likely to happen is the following. I think after this school year starts if the governor signs the bill, which sources tell me he will.

Ogles: Yes, I think he will.

Leahy: I think he’s not signed it yet. But if he signs it, and the bill basically says the enforcement mechanism for any school system that violates these tenants is to withhold money.

And the person who designs that is Education Commissioner Penny Schwinn. She’s going to be loathed to do that, frankly. So what I think is going to happen is she won’t enforce it. We’ll see.

Give her the chance. But then the General Assembly would come back in, generate and they’re going to have to fix it.

Ogles: I think I think you’re right. I think the governor will sign it because it’s a half measure, like so many other pieces of legislation that he signed this year.

There are a whole bunch of do-nothing pieces of legislation. So there’s no downside for him to sign it because it actually doesn’t accomplish anything now.

Leahy: Didn’t he just sign this big anti-transgender bill. Or is that a half measure, too?

Ogles: Oh, it’s certainly a half measure, because rather than banning that altogether the way we should.

And I think I made the comment two weeks ago. If you’re a dude in a dress, you’re still a dude. Go use the men’s restroom.

Leahy: If you are a dude in a dress, you are still a dude.

What we’ve done and they’re calling it a bathroom bill. But all it requires is for the business to put up a sign. So basically, what you’ve done is codified that a man could use the restroom with a little girl.

Leahy: They’ve codified that unless the local business puts up a sign of opposing. Is that how it works?

Ogles: Well, again, it’s one of these grey areas.  If you’re going to address an issue such as this, why don’t you actually address it instead of skirting around the edges so you can campaign on it?

And that’s all this is. This is a campaign bill versus an actual bill that does something, and he needs to be called out on it.

Boy did we veer off of we started with Trace Adkins and MuleFest. And here we are, dabbling.

Leahy: The coffee is good, though. It’s the early morning. And I keep telling our listening audience the way the best way to experience this program is, this is a three or four-person conversation every day.

Leahy: I have a conversation with you. We sit here and we drink our coffee. And our listening audience, they’re getting up, and they’re saying, I wonder what Mike and Andy, you’re gonna talk about today.

And so they’re drinking their coffee, and they’re saying, well, that’s interesting. I wonder where this is leading.