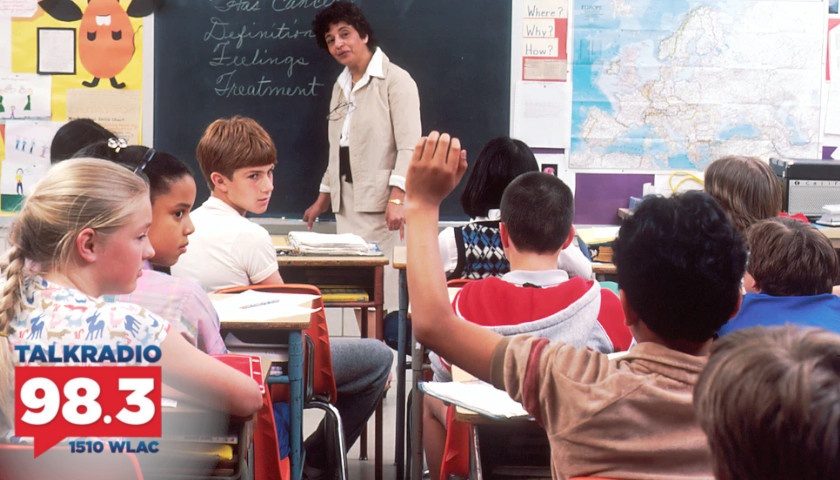 Live from Music Row Thursday morning on The Tennessee Star Report with Michael Patrick Leahy – broadcast on Nashville’s Talk Radio 98.3 and 1510 WLAC weekdays from 5:00 a.m. to 8:00 a.m. – host Leahy welcomed Grassroots Director of Americans for Prosperity-Tennessee Grant Henry to the studio to give his take on the recent Tennessee Department of Labor’s no proof of status required article to receive English speaking civic education grants from the state.

Leahy: In studio Grand Henry, the grassroots director for Americans for Prosperity-Tennessee. I’ll let our listening audience join in on this one.

Also in studio with us is the mayor of Maury County that, you know what I’m gonna say, turbocharged bastion of freedom Andy Ogles. Hello. You smile every time I say it.

Ogles: It hilarious. But it’s true. Sometimes just stating the truth is worth stating. Maury County led through COVID and we continue to lead, and we’re not going to back down from this insanity that’s going on across the country from our government.

Leahy: You know what’s going to happen now, Andy? When you go out and people talk to you and you give a speech, what certainly is going to start to happen is when people introduce you, they are going to say, there is Andy Ogles, the mayor of Maury County. And then the crowd will say the turbocharged bashed into freedom! (Laughter)

Leahy: Amen, brother! Amen. One place that may not be exactly a turbocharged bastion of freedom is the Tennessee Labor Department. This is our lead story at The Tennessee Star. Grant Henry with Americans for Prosperity-Tennessee.

I want to just bring this story to your attention and get your comment on it Grant. Headline. We have such great reporters that are Tennessee-based here at The Tennessee Star, Corinne Murdock.

And of course, we have Laura Baigert. The only journalist in America who got an exclusive interview with former President Donald Trump on Saturday. I don’t know if I told you guys that before. (Laughter) But we also have Corinne Murdock and she also lives in Tennessee, and she has a unique beat for us.

She does two things. She covers the Tennessee State House. But when we open up a new state, we sent Corinne and she gets the stories and she helps our local reporters there launch it. When we opened up The Virginia Star, we’ve got great reporters there like Matt Hall and Eric Bergs.

We sent Corinne to open that up. Then in Georgia, we’ve got a good reporter there, Tiffany Morgan. We opened up The Georgia Star News. We sent Corinne in there. We opened up last week The Arizona Sun Times, and we got exclusives from Corinne. She went to the location where they’re doing that audit of the 2020 election in Maricopa County.

Our local state House reporter is a woman based in Phoenix called Rachel Alexander. Now, we brought back Corinne because we’ve opened Arizona. Her job is done there, but there will be other states for her to launch. She’s back here in Tennessee.

And here’s the headline of her story. Grant, I got to read this to you and get your reaction. Headline. Tennessee Labor Department Offering English Literacy Civics Education Grant for Hamilton County Immigrants. No proof of legal status required.

Let me just say one thing. For this program, apparently, the Gateway Media Gannett, the hedge fund that now owns USA Today Network in Tennessee is trying to import somebody to be a reporter here for the Nashville, Tennesseean.

They haven’t required that proof for nearly two years! The Department explained that its Adult Education Division made the change to align with federal regulations concerning the program.

The only requirements for immigrants who participate in the program are that they are 16 years old, not enrolled in secondary school, and classified as English language learners. Money from Tennessee under this administration of Governor Bill Lee is going to support the education of illegal immigrants. What do you make of that, Grant Henry?

Henry: Clearly off the bat, anytime you’re spending Tennessee taxpayer dollars towards individuals that are not properly documented, you’re going to have an obvious, objective problem there. I would like to think, and I would hope that either Democrats or Republicans in the state would agree with that sentiment. Let me go out on a limb here a little bit.

Leahy: Out on a limb.

Henry: Out on a limb here.

Leahy: Hold it. We’re going to break some news because somebody on The Tennessee Star Report other than me, (Henry chuckles) is going, I don’t go out on a limb. Everything I say is supported by fact. But Grant, again, you are going out on a limb. Let’s have the drum roll.

Grant: There it is.

Leahy: There is Grant on a limb. Speaking as Grant Henry, not on behalf of Americans for Prosperity. I’m going through this book called Politics According to the Bible, written by the world-renowned theologian Wayne Grudem.

He goes through a presentation of why there is a biblical mandate for Christians and the Church to get intimately involved in the political process. A wild theory. But he actually breaks it down issue by issue.

One of them is immigration according to biblical standards. And he says there’s a charge the Old and New Testament to treat the Sojourner as we do ourselves.

Leahy: No, let me stop. I know where you are going with this.

Henry: I think you are in the same spot here.

Leahy: Because our friend Kelly Monroe, I know because she wrote a book about Finding God at Harvard. Yes, she found him. She had to look pretty hard, but she said she lives in Ohio. A good friend of ours. She has written a lot about the word Sojourner and what that actually means.

Henry: Wayne Grudem’s take on this is Sojourner is an individual that is seeking residence in another nation through the legal process.

Henry: And this is coming from Old Testament scholars, obviously going through the Hebrew itself and saying and I think therein lies the conservative message rooted in Judeo Christianity.

As long as you’re pursuing illegal routes, we have a biblical mandate, a call to look after the Sojourner. But it’s that caveat of like, look, we have borders. We are a legal nation. The international body itself defines it in the exact same way. We have to be realistic here, too as well.

Leahy: Again, this is back to that the way that the Church has been taken over by left-wing ideology. The social justice angle. If you really follow the Bible and you look at that definition of Sojourner, it is precisely as you describe it. It’s somebody seeking to legally enter a country.

Ogles: I’m going to take a different perspective on this. If I’m harboring a fugitive in my home, I’m complicit in a crime. If someone is here illegally in this country, and you have the state of Tennessee under this administration, harboring criminals and giving taxpayer money to criminals it is an accomplice to a crime. We’ve got to start enforcing our laws. Illegal means illegal. Period.

Leahy: Yeah, I can’t. I can’t disagree with that.