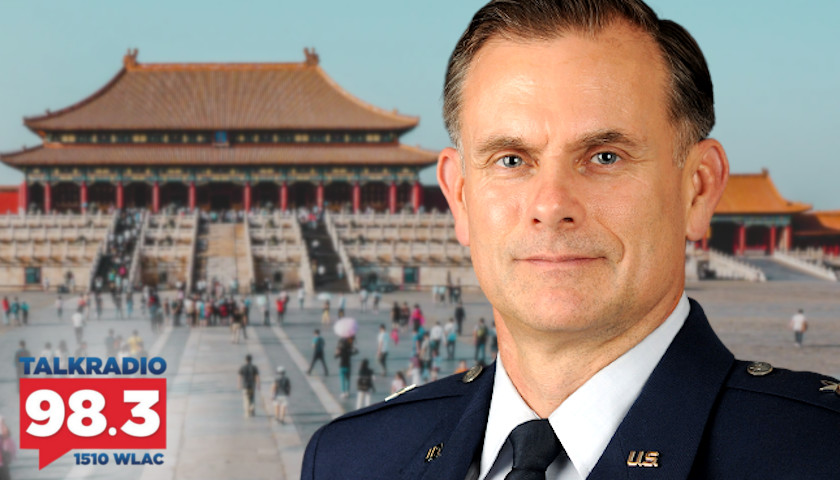 During the first hour, Spalding described his role on the National Security Council staff under the Trump administration where he analyzed challenges America faces from countries like China, Russia, Iran and North Korea. He later explained how part of his job specifically consisted of three pillars of national security strategy to protect, rebuild, and inspire other countries to adopt democratic principles. Towards the end of the segment, Spalding went into more detail on 5G uses and dangers.

Leahy: We are joined now on our newsmaker line by retired Brigadier General Robert Spalding with the Hudson Institute and an expert on China. Good morning General Spalding.

Leahy: We’re very glad you are with us. I read your bio. What an interesting background you have. You served in the Trump administration on the National Security Council and you’re an expert on China. You lived in Beijing and served as an attache to the U.S. Embassy there. Is that right?

Spalding: That’s correct. Yes. I was in the first year of the Trump administration as a senior director for strategy and was the chief architect for our current national security strategy.

Spalding: Right. I was there when McMaster was there. During the first year while he was there.

Leahy: And what is the relationship between the national security advisor and the National Security Council?

Leahy: And so how many members are there on the national security staff?

Spalding: Oh, gosh, I don’t know off the top of my head right now. But I know that the Secretary of Defense, Secretary of State, Secretary of Treasury, the National Security Advisor, the president, the chairman of the Joint Chiefs and there may be one or two others. And the vice president I think.

Spalding: That’s correct but there are people that did that and certainly I did some of that but my main job there, I was brought in to really educate the National Security Council staff on the challenges we face from countries like China primarily, but also other authoritarian regimes like Russia, Iran, and North Korea. And my job was to essentially structure the National Security strategy and to provide the pillars of what we were going to do as a government to push back against these challenges.

Leahy: And how effective would you say we have been at push pushing back against those challenges? And in particular, the multiple challenges represented by the Chinese Communist Party and the Chinese government?

Spalding: Well, so I would say that we’ve been partially successful. There’s a lot more to do. And the partial success we’ve had if you consider that the National Security strategy has roughly three pillars. The first is to protect. And that’s really to protect our civil institutions in the United States from influence from regimes like the Chinese Communist Party.

I would say that President Trump was very successful at that. The second pillar is rebuilding the country. I would say that we had less success there. And that’s really investing in our infrastructure, our manufacturing, our science and technology, stem education, and our critical infrastructure like secure internet. I think we’ve been only partially successful there.

And maybe even less so than in the protect. And then the final pillar is really about inspiring other countries to want to embrace Democratic principles. And the way that we do that is by growing our economic prosperity in the United States as a shining beacon as our citizens are able to reach their true potential. And then using the excess that we generate to help other nations similarly develop. We did that during the Cold War to great success, but we’ve been less so since as we’ve been more focused on say military interventionism abroad.

Leahy: Well according to press reports you had a very particular view on the next level of telecommunications infrastructure. The so-called 5G Network, which is in various levels of development around the world. And there’s a report that out that you authored an internal study which recommended that the United States federal government overtake the development of a 5G work infrastructure.

And I guess the argument there was for national security reasons. The reports are that that was leaked and after that was leaked you were removed from the National Security Council and went back to the Air Force. Do I have that right?

Spalding: That’s the correct storyline that came out by the media. (Leahy chuckles) Of course, that was not the report that I wrote. In fact, you can read the report. It’s posted online where that article came out from Axios.

Leahy: Yeah. I read the Axios article. You knew where that came from because I took that exactly from a report in Axios, which is not exactly what you might call a conservative fact friendly news outlets sometimes.

Spalding: Well, and in fact, I called the reporter himself before that story was posted and I said there was no intent to nationalize anything. I was doing a report on the opportunities and challenges and in particular how the United States might protect its citizens from the predations of countries, like China, Iran, North Korea, and Russia.

Leahy: So you have experience with many of us in the conservative world have experienced. Information twisted in a certain way to reflect badly on either you or the Trump administration. And once that story gets out, it’s out there and you have to deal with it.

Spalding: That’s correct. I actually believed it was a good thing because what it did was informed people who read the report. And by the way, that report was read by nations all over the world. And in fact, it has led to policy changes and as you know, the government eventually came over to my point of view as they realized that what I wrote in that report was essentially correct and that is that 5G is a pathway to collecting data on the citizens of a free society and to use that data to influence them in ways that are counter to their interests.

Leahy: Yeah, that’s exactly the way it looks to me. Again, I’m not a technical guy. I’ve heard 5G and I’ve heard it described as the next level of telecommunications infrastructure for those of us in our listening audience who like me have never heard about it and don’t really know what it is. What does 5G mean and what level of development is it currently in?

And you use that tracking to get things that you want the same way you use your smartphone today. And I’ll give you an example. Today If you want an Uber you pull out your phone you open an app and call an Uber. In a 5G world, you just say I want an Uber. A camera does facial recognition. It reads your lips or a microphone and then picks up your voice and recognizes you and then sends a car. That’s what 5G is. It’s really the ability that the city has and in the surrounding areas to track you and then to use that tracking to provide you services. That’s why it’s so dangerous for democracy unless it’s encrypted and secured.

Leahy: This scares the tar out of me.

Spalding: Well, that’s what China is building in China and Huawei was seeking to do outside of China. Now the fundamental problem we have with the way that we’ve gone about attacking this is that we said well if we just don’t use Chinese companies to build these networks it will be okay. No. China has essentially dominated the standards-making body internationally for telecommunications.

That means any company working in those international bodies, companies like Verizon, AT&T, Erickson, Nokia, and Cisco also have to abide by those standards and the patented technology that the Chinese have used to dominate the industry. You are getting the same thing.