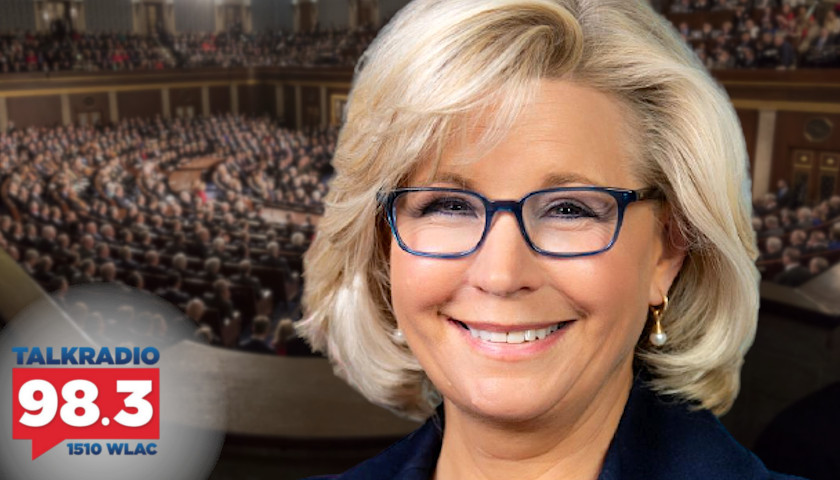 Live from Music Row Wednesday morning on The Tennessee Star Report with Michael Patrick Leahy – broadcast on Nashville’s Talk Radio 98.3 and 1510 WLAC weekdays from 5:00 a.m. to 8:00 a.m. –host Leahy welcomed Tennessee Star National Correspondent Neil McCabe to the newsmakers line to predict the fate of Liz Cheney being removed from her post as House Republican Conference Chair and her possible replacement.

Leahy: Joining us on the newsmaker line, the very best Washington Correspondent in the country, representing The Tennessee Star and the Star News Network, Neil McCabe. Good morning, Neil.

Leahy: The big showdown of Liz Cheney, who’s been promoting herself so much, it even has irritated the minority leader, Kevin McCarthy. He’s sick of dealing with her. He wants to get her out of the House conference leadership position which is the number three position there. What’s going to happen today?

McCabe: They’re going to have the vote today and then they’re going to sort of have a round of sort of candidate events and people will have a chance to sort of lobby with their colleagues. Then they’ll have a vote to fill the position if it is vacated on Friday. And I think it’s interesting that one, it really has to have been irritating to McCarthy because the disposition is towards reaction, not action.

You’ve noticed this is a guy who has, I think, with vacancies he’s within three votes of taking over this Chamber. If he was to flip over, say, five to 10 conservative Democrats, he would be Speaker the House. He’s done nothing to present a positive agenda. He’s done nothing to sort of assuming that he’s that close. And he’s a very passive guy.

And basically, he just waits for Democrats to make a mistake. For him to actually stand up and say he’s going up against Cheney, that’s a big deal. And the other point is this is not a small office. She has a staff, about 50 people, and has her own sort of suite of offices associated with the Republican conference.

This is not just a token position or symbolic position. She is actively involved in running the Republican program in the House of Representatives, which makes it so galling that she’s come out against Trump. And, frankly, against the vast majority of House Republicans who not only support Trump but love him.

Leahy: What is Liz Cheney’s endgame? Why is she doing this?

McCabe: Well, as I wrote in The Tennessee Star for the Star News Network, Cheney is being backed by Team Ryan. Paul Ryan’s organization is backing her. His top aid and former chief of staff and someone who’s a senior advisor at his nonprofit called the American Idea Foundation, Kevin Seaford. He’s her senior advisor. Her fundraiser is a guy named Jeff Livingston, who’s been raising money for Paul Ryan, going back to 2004.

And other members of sort of Team Ryan and, of course, the Bush family and Mitt Romney have been sort of egging her on. I would say that Paul Ryan is the one who’s running this thing from the shadows. If she’s following his advice, she is a fool because Paul Ryan has never demonstrated any political acumen or skill, or competence.

This is the guy who was handed a 50 in-seat majority and did absolutely nothing with it. He was handed the largest House majority going back to 1928. More than 80 years and he torched it. Paul Ryan had 20 more seats than Newt Gingrich. And the fact that Liz Cheney is marching into the Valley of Death with Paul Ryan as the sort of coach and mentor is absurd.

Leahy: In the vote today, is she removed? Yes or no?

Carmichael: Will it be close?

McCabe: No. These people voted to oust her last time. 140 people voted to keep her and 60 said to get rid of her. They are going to flip that. She might get 60 saying ok. Look for Nancy Mace the freshman congresswoman from South Carolina who worked in the Trump campaign in 2016. She is also part of this Team Ryan political organization.

She didn’t vote to impeach but she’s been very negative of the President and presenting herself as the new face of the sort of post-Trump Republican Party. Watch Nancy Mace to see what she does. And if she votes against Cheney, then, you know it’s pathetic because Mace and Cheney are supposed to do a fundraiser in June.

Carmichael: Now, question, assuming that she does get beat, will she run for reelection?

McCabe: She’s raised millions of dollars to her first quarter. She raised $1.5 million dollars, and she’ll keep raising money. There’s no reason. I mean, look at Andrew Cuomo in this political era, you don’t quit. She’s going to keep it going and she’s motivated by this belief that she is correct. And she really believed that there was nothing wrong with the way this election in 2020 was handled.

And she calls anyone who questions it, she says they are part of the big lie. And that’s absolutely galling. It’s galling to people who saw things with their own eyes.

Carmichael: I think that she wants to become the next Nicole Wallace. I think she’s applying for a gig. I’m predicting that if she loses, that she’ll put feelers out to join one of the networks in the news area so that she can have a much bigger platform than she’s going to have if she were to lose. And if she were to lose an election in Wyoming in the primary, then her value to a news network drops dramatically.

McCabe: She doesn’t want to give up this job. I mean, this is a great job. When you have a staff of 15, 20 people, you have your own offices, you have on your own agenda, and you have so much control over what the Republicans are up to znd plus her fundraising and leadership PAC and everything else, she doesn’t want to be deposed.

Carmichael: I know that but if she is deposed, then she loses all of that and becomes just a low-level member of the House and chairman of no positions that matter. If she loses in the primary, then she kind of becomes irrelevant.

McCabe: They really believe that Trump is finished. The Republican establishment has always believed that if we could just get rid of Trump, then people will be quiet. And then we can go along to get along. We can do business with China. We can bring in all the cheap labor. We can do the amnesty. President Romney would have given us amnesty. He would have given us an assault weapons ban and we’d be speaking Chinese right now.

Leahy: (Chuckles) That’s a good one. She’s going to be deposed today. When they vote for her replacement on Friday will Elise Stefanik be selected or somebody else?

McCabe: Well, there’s a lot of early momentum for Stefanik which surprised me because Jim Banks from Indiana, who’s the head of the Republican Study Committee, kind of had the inside position. It just seems like events unfolded and Banks wasn’t ready. And people are sort of mounting some rearguard actions against Stefanik because she has a pretty left-wing voting record.

But to her credit, she went after the Russian collusion hoax. She defended the President left, right, and center during the 2020 campaign. And that’s what people want right now. People want someone who’s willing to fight for this party, either you are in the party or your not.

Leahy: Because she represents the district of upstate New York where I grew up until I was, like, 12 years old, very far North. She’s a very clever person. She came in sort of under the wing of John Boehner. So she’s kind of a middle-of-the-road Republican. But she seems to understand power. She seems to understand the public, which is why, even though she’s got a very middle-of-the-road voting record, she’s defended Trump very very successfully. So bottom line, do you think she has it?

McCabe: Yeah. She was very close to Ryan until she figured out she could raise five million dollars ‘defending Trump.’ If she can raise money, she’ll defend Trump. She wins.

Leahy: I think you’re exactly right in that.