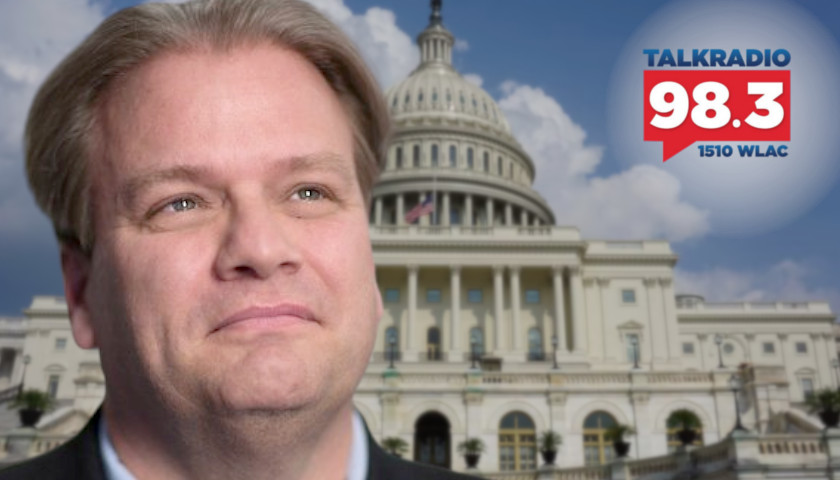 Live from Music Row Thursday morning on The Tennessee Star Report with Michael Patrick Leahy – broadcast on Nashville’s Talk Radio 98.3 and 1510 WLAC weekdays from 5:00 a.m. to 8:00 a.m. – host Leahy welcomed  David Williams, head of Taxpayer Protection Alliance to discuss out-of-control inflation and who is responsible for it.

Leahy: We are joined now by David Williams, who is the head of the Taxpayer Protection Alliance. And we’re going to talk about inflation – out of control, who’s responsible. David, welcome to The Tennessee Star Report. I’m in-studio along with our all-star panelist, Roger Simon. Good morning, David.

Williams: Good morning. Thanks for having me.

Williams: Well, I’m trying to. I mean, it’s tough with the government spending all this money. I mean, $10 trillion over the last two and a half years. So it’s a tough job, trust me. (Chuckles)

Leahy: Yesterday we see March’s Consumer Price Index rate of 8.5 percent, a 40-year high. It’s not been since the days of Jimmy Carter that we’ve seen that kind of disaster.

Then we saw the producers price index going up 11 percent, which is basically a foreteller of what’s going to happen to the consumer side. David, who is responsible for this mess?

Williams: Republicans and Democrats. There’s been so much government spending and taxpayer spending over the last two years, and that’s why we have inflation. We were told in November when it was 7.5 percent, that it was temporary, that don’t worry, inflation is temporary.

But we’re seeing now eight and a half percent and it’s not temporary. It’s going to be around. And I’m concerned that we’re going to see a recession because the Federal Reserve is now going to try to help, and I’m using air quotes, “help” by raising interest rates.

And we’ve seen in the past when that happens, we go into a recession. This is something that people know instinctively, right? You don’t need the Federal Reserve.

You don’t need me to tell you how bad things are. You go to the grocery store, you go to the gas pump. You know, things are bad and they’ve been bad for a while.

Leahy: I thought according to the Biden maladministration, the grifter in chief, the legal but not legitimate president of the United States, he says it’s all Putin’s fault. What’s your thought?

Williams: Ridiculous. And it makes no sense at all, because this was happening before Putin went into Ukraine. It’s a convenient excuse. And what happened at the beginning of the Biden administration was very telling when he shut down the Keystone XL pipeline.

Simon: I was just going to ask you about that.

Williams: (Chuckles) We would have been closer to energy independence if he wouldn’t have shut that down. He only has himself to blame. And it’s so funny that they say, well, every option is on the table to address gas prices.

Think about that for a second. Half of the money for electric vehicle charging stations is going to poor communities. These vehicles cost $58,000. I don’t know how many people in these disadvantaged communities are going to be buying electric vehicles.

Simon: Did you ever see the pictures of all the dead electric vehicles in France? They’re amazing. They go for miles. There’s these graveyards of electric vehicles because the minute their batteries go, nobody can afford to buy them. There are photographs of this online. The whole climate-change thing is one of the big lies of all time.

Williams: It is. And it’s about virtue signaling. It’s not about climate change.

Williams: Virtue signaling. And I have not seen these pictures, and I would love to see that. Maybe I shouldn’t, because it’s horrifying to me. But the batteries are made from toxic materials.

The damage that is being done to the earth to get these chemicals and these products to build these cars is incredible. And of course, we’ve heard about wind turbines killing birds and solar farms killing birds. So I don’t know if they’re really environmentalists anymore after all of this.

Simon: No, they’re anti-environmentalists. And they’re also slave labor exploiters in the Congo for the materials for the batteries.

Leahy: You’ve done a very good job of analyzing what the problem is. Now comes the real tough part. We’ve got the maladministration of Joe Biden in power. We’ve got a Democrat Congress, House of Representatives, and a Democrat-controlled U.S. Senate. How do we get out of this inflation mess?

Williams: First of all, stop spending. That’s the first thing. And we need to cut spending, and not one of these fake cuts. Because in D.C., when they say, well, we’re only going to increase spending by four percent this year, not eight percent, that’s a spending cut.

Leahy: Am I being overly pessimistic here, David?

Williams: No, you’re not. You’re being realistic because they’re already talking about another COVID relief bill. November is coming very quickly and we killed the Build Back Better bill.

That was something good that happened because that was going to spend up to $5 trillion over 10 years. That was going to be a massive expansion of government. So we are able to kind of beat that back, and listen, right now we have to play defense and we have to get to November and hopefully change the House and the Senate so in 2023 we can have some Republicans.

And I’m hoping some strong-willed Republicans will come in and make some fundamental differences in this budget and spending, and tax day is only a few days away. And if the inflation wasn’t enough, now it’s a double whammy of tax day on Monday.