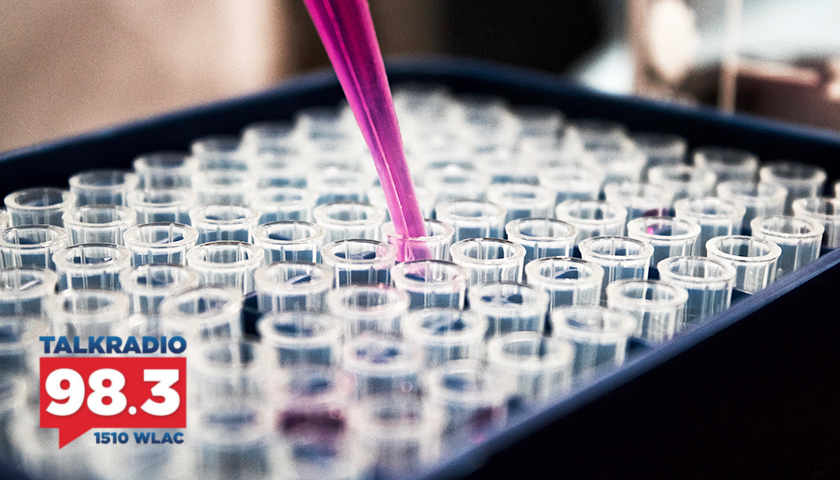 Live from Music Row Wednesday morning on The Tennessee Star Report with Michael Patrick Leahy – broadcast on Nashville’s Talk Radio 98.3 and 1510 WLAC weekdays from 5:00 a.m. to 8:00 a.m. – host Leahy welcomed the original all-star panelist Crom Carmichael in studio to weigh in on the Biden administration’s desperate attempt to gain control at the source of the monoclonal antibody COVID-19 and its distribution.

Leahy: In the studio, the original all-star panelist Crom Carmichael. Crom, during the break, you were telling me about this crazy press conference in which White House staffers, in essence, shut down and insulted the prime minister of the United Kingdom.

Carmichael: No, it wasn’t that. The aids, what they did was they shouted down when the press started asking questions of Biden about the southern border, the White House aides in the room started making so much noise that you couldn’t hear the answer.

And essentially shut down the questioning. I want to get back to what you were talking about. And I want to try to tie this into a whole lot of other things because to me, they are all related. You and I can agree that the exit from Afghanistan was a fiasco?

Carmichael: We can agree that the control of the southern border is just terrible.

Leahy: A violation of American immigration law by the Biden maladministration. There’s a story here that the U.S. pledged to send vaccines to others around the world. It apparently is also just a complete disaster for logistical reasons.

So all of the major things like policy initiatives or things that the administration is supposed to be doing, they’ve all been executed terribly. Just terribly. We could say this is just an example of just gross incompetence.

Leahy: That’s one thing we could say.

Carmichael: We could. What would be the worst thing you could say?

Leahy: That’s the most likely.

Carmichael: And I believe that all of this is intentional.

Leahy: I agree, too.

Carmichael: Let’s go back to when COVID broke and hydroxychloroquine was suggested that it could help people if they took it either as a prophylactic or if they took it immediately upon a diagnosis.

And Fauci and the entire federal government on the health care side shouted that down and called people names and really just shut down the distribution of a generic product. Just shut it down.

Leahy: Shut it down.

Carmichael: Now then later we find out that hydroxychloroquine actually did help.

Carmichael: And there’s no evidence that it ever hurt. On balance, it was helpful.

Leahy: But depending upon your circumstances.

Carmichael: And not how your doctors provided it. I’m saying on balance.

Leahy: On balance. I’m agreeing with you. It was helpful.

Carmichael: What I’m saying is that now you have this monoclonal. I can’t pronounce it.

Carmichael: Now it looks as if it works. The evidence is 70 percent of the time. It helps. So what is the Biden administration doing? They are trying to gain control of the source.

Carmichael: And they are not just trying. They’re gaining control of the distribution. That’s why I was so important in the earlier one when I said this is how pharmaceuticals are distributed. This is the logistics. So you have the Biden administration.

Leahy: That is another way. It’s a way when the marketplace such as this is working and you have a pharmaceutical like this, the distributor who’s been vetted and approved.

Carmichael: And knows how to handle the drug.

Leahy: How to handle the drug and how to move it through the supply chain to get that it can be delivered over to patients.

Leahy: The people who know what they’re doing.

Carmichael: Which won’t work because the people who are now in charge have never done it right. Let’s look at an article in The Wall Street Journal. Headline.

U.S. Pledged to Vaccinate Poor Countries Stumbles Amid Logistical Challenges. And this article goes on to point out that there are so many different things about the handling of pharmaceuticals to address COVID that require special handling that the Biden administration people are clueless.

Leahy: Well, they’re political hacks. And they don’t know anything about the supply chain or managing medical supplies. They’re hacks.

Carmichael: Right. But yet they are the ones who are in charge. They now want to be in charge, and they’re about to be in charge of the distribution of a very important pharmaceutical throughout the U.S. market.

So here’s my question Michael. And I’ve raised this over and over again. Let’s even look at it from the standpoint of Tennessee.

If somebody who would have lived dies because of a bureaucratic decision to specifically withhold the drugs from that person is the bureaucrat that did it as liable as a police officer who shoots somebody while they are on duty?

Carmichael: I asked the question because I literally don’t know. What I’m saying is is if the Biden administration takes control of the distribution of pharmaceuticals, and then it is found that they are specifically denying pharmaceuticals to red states, let’s say or they’re giving as much as New York wants and as much as California wants but denying the drug to Florida and Tennessee and Alabama and Texas. Let’s just say that it’s doing that.

Carmichael: But you find absolute documentation. You can prove it.

Leahy: And you can prove it.

Carmichael: My question is, can any of those people be held criminally liable?

Leahy: Let’s just say a 66-year-old male who’s got the vaccine tests positive for COVID-19 goes in and asks his doctor to get the monoclonal antibody treatment is denied because of the Biden administration policy.

And then if that person then becomes sick and dies, what does his family do? What recourse do they have?