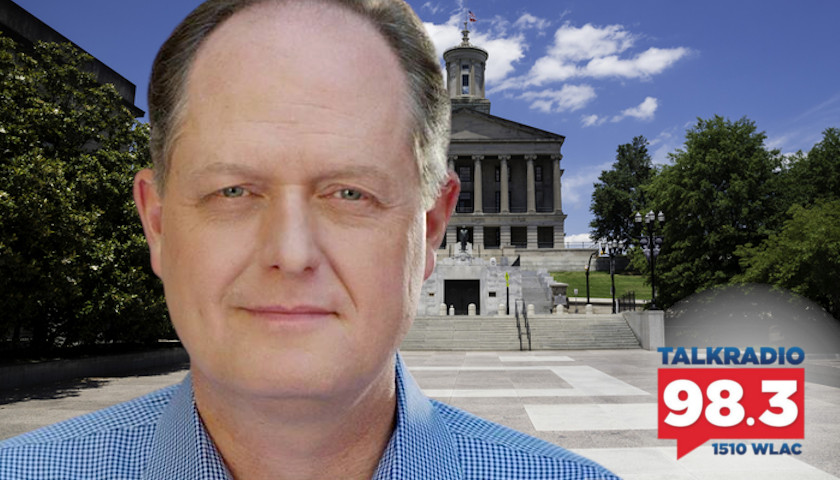 Leahy: On our newsmaker line we welcome back State Senate Majority Leader Jack Johnson. Jack, thanks for your patience. If you would indulge me. Jack, I just have to read this breaking story.

I’m not asking you to comment on this breaking story. We’ll get back to education in just a minute. I just have to read this because it’s funny. (Laughs) Are you ready for this Jack?

Leahy: This statement by Donald J. Trump just came out, like a minute ago. I’ll just read it. You don’t have to comment on it, but I find it very amusing. Just like in the 2020 presidential elections, it was announced overnight in New York City that vast, irregularities and mistakes were made in that Eric Adams, despite an almost insurmountable lead, may not win the race.

The fact is, based on what has happened, nobody will ever know who really won. The presidential race was a scam and a hoax, with numbers and results being found that are massive, shocking, and determinative.

Watch the mess you’re about to see in New York City. It will go on forever. They should close the books and do it all over again the old-fashioned way when we had results that were accurate and meaningful. Jack, thanks for letting me get that statement out. I’m not going to ask you for a comment. (Laughter) Isn’t that amusing?

Johnson: I would like to make one statement. And that’s why in Tennessee we don’t have universal mail-in voting. But we have a very strict system. You can vote absentee, but you must request the ballot with the signature.

That signature is verified, and you must do it and have a reason for voting absentee. And I believe that the root of many of the problems in last November’s elections, and I do think it’s very ironic, I believe, is a word you used earlier in the program that New York (Laughter) and what is going on is because of their massive mail-out voting.

It’s problematic. We’re not going to do that in Tennessee I can assure you.

Leahy: All I have to say to that Jack is, Amen brother. And thank goodness for the Tennessee General Assembly and for Secretary of State Tre Hargett, because we don’t have those kinds of problems here in Tennessee.

So a good point. Thanks for that comment. It’s just so funny.  I just had to bring it up. (Chuckles) Now, Jack, we’re talking a little bit about education and it seems to me that we have at 145 separate school districts in the state, and they all have boards of education and people run for it.

And here’s what I’ve noticed. I liked to get your comment on this, and these are probably groups that you deal with, but I have a perspective that maybe they’re not doing such a hot job. So what happens is people will run for the board.

They’ll have an agenda that’s more traditional education. They get elected to the board, and then they go off to training with the group called the Tennessee School Boards Association.

And somehow they get the impression from that training, this is how I see it, that their job is not to run the schools, but to do whatever the school Superintendent does. I think that’s wrong. Am I off on that, or is there something there to it?

We set broad education policy for the state in terms of standards and the way schools should operate, so that we have a degree of consistency across the state. And then we have created political subdivisions, that is what they’re legally referred to as, in the form of a school board school.

We call them local education agencies, LEAs, or local education authorities. Sometimes people say that. So we create these LEAs that are run by an elected school board. And it’s not a perfect analogy, but I think it’s the best we have, which is to think of that school board as a board of directors.

That’s what they are. And just like with a company, a board of directors hires a CEO to run the day-to-day operations. And so you have locally elected school boards that set the local policy that makes those decisions about the curriculum and about things that are important to the community that might be different.

As I said earlier before the break, from community to community. That’s why we don’t want consistency across the state. The elected boards are the ones that are accountable to the electorate.

They’re duly constitutionally elected. They should set the local policy and then that policy should be enacted by the director of schools or the school Superintendent. Whatever you choose to call them.

And so I agree with you wholeheartedly. And I do see, and we’ve certainly had a testimony, and we’ve had folks that have come in and talked about that its kind of the inverse that the director comes in and tells the board what needs to be done from a policy standpoint.

And that’s fine for them to make recommendations. But ultimately, that policy should be set by the elected school board.

Leahy: Yeah, I agree with that. And it seems to me, however, that the way this institution is set up, it is very difficult for a school board member to come in that wants to reverse course from these various elements of critical race series that are now creeping into the school systems and other things that they don’t like.

Very difficult for one member of a 12 member board or two or three to change course and then actually to get the local school district director to follow their direction. Instead, it seems like the school superintendents are unaccountable and tell the school board what to do, which is exactly the opposite.

I think that makes people very discouraged. Last question for you, what do you think we do in the future on this?

Johnson: I’m a glass-half-full kind of guy, and I’m encouraged that there is more engagement from parents and communities relative to the school board. We have school board elections next year, and I think that there’s going to be a great high level of engagement. And that’s the answer to the problem that you just outlined.