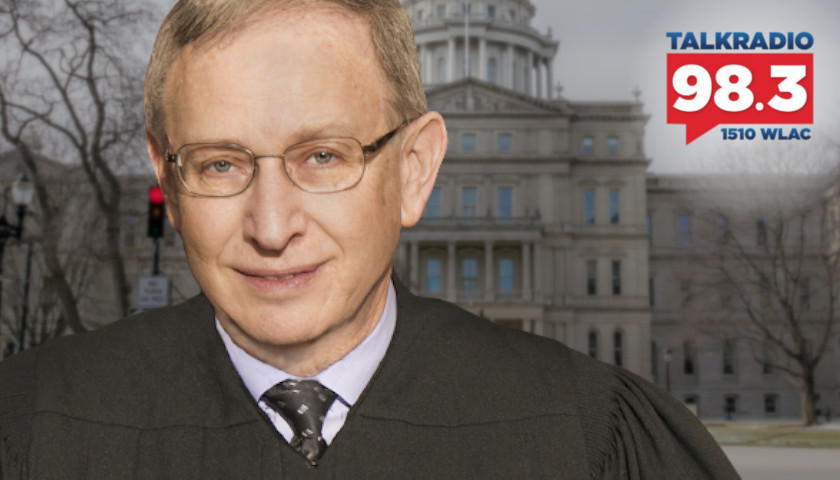 Leahy: Steve Markman is now on the phone. He’s with Hillsdale College and he had an article about, now let’s see if I got this right. I’ve said gerrymandering, I think maybe technically it’s gerrymandering, but Steve, welcome to The Tennessee Star Report.

Markman: But I think most people use gerrymandering, but I don’t think either way is any big problem.

Leahy: What is the correct pronunciation, Jerry or Gerry?

Markman: Well, I thought Gerry was the name of the great founder whom the term has been named, but I don’t know.

Leahy: Exactly. Either is acceptable. I think you’re right. I think the founder who found this was named Elbridge Gerry back in the 1800s. Didn’t he represent both New York and Massachusetts at different times?

Markman: Well, you may have more insight on that than I do. He certainly was engaged in Act of a founder, but I don’t know the history of his representation.

Leahy: So tell us about your article in The Wall Street Journal. Tell us where you’re from and why this topic is of such great interest to everyone today.

Markman: I’ve been a justice on the Michigan Supreme Court for more than 20 years. I retired at the end of last year because I was too old under our Constitution to continue to sit. But I’ve also taught at Hillsdale College, a small college in Southern Michigan.

Leahy: Let’s just stop for a moment about Hillsdale. A, we love Hillsdale. One of our reporters at The Tennessee Star, our ace reporter, Corinne Murdock is a graduate of Hills Dale College. And, of course, we’re good friends with John Miller, who runs the journalism program up at Hillsdale College. One of the best colleges in America.

Markman: Yes. I’m very proud to be associated with it. It really reflects the values that I I believe in. And I certainly know John. John is a great a great scholar. And, of course, he writes a great deal for a wide variety of publications around the country. I’m very pleased that you think so well of Hillsdale.

Leahy: I think everyone in our listing audience thinks well of Hillsdale. How could you not? It’s such a great institution. Tell me a little bit, 20 years on the Michigan Supreme Court, and then you bye the Constitution you had to leave because of age. Really? I didn’t know that was in the Michigan Constitution.

Markman: Yes, it certainly is. I don’t want to tell you what the age is, but nonetheless, I reached the limit, I’m afraid.

Leahy: How does that feel to constitutionally not be allowed to continue? I’m kind of in favor of the lifetime appointment thing for judges which we have in the federal judges and the Supreme Court justices.

Markman: Ironically, I’m not really hostile to the idea of an age limit. I think there are good, many people, and I like to think I’m one of them who could continue to serve the public well after that age.

But there are a growing number of people after a certain age who might slow down a little bit. Maybe they don’t realize that. Perhaps I don’t realize that I’ve slowed down to a certain extent, but I think it’s a balance. But our Constitution is very explicit that there is an age limit.

Leahy: I’m 66. So if I were to serve, which would never happen, I would feel that if at my age, I was limited in doing something, I would say, hey! I still got game! That’s what I’d feel like.

Markman: Oh for the days when I was 66. (Leahy laughs)

Markman: I was a chief counsel for the Senate Judiciary Committee in Washington, and I served them in the Justice Department during the, believe it or not, Reagan administration quite some time ago.

Leahy: That’s when we really had a Justice Department. Asterisk we’ll come back to that in a bit. Judge Markman, would you mind sticking through the break here? Because we want to get into the meat of this Wall Street Journal article, which was really terrific.

And we appreciate your getting up so early this morning to talk with our listing audience. Can you hang through the break?

Markman: Sure. Thanks for having me.

Leahy: You had a great article at The Wall Street Journal last week and you were pushing back against the University of Michigan guide to gerrymandering. They set forward a very weird idea that you rejected in a very, basically direct and concise manner.

Tell us why they put a guide to gerrymandering together and why you pushed back and what’s going to happen?

Markman: Well, thanks for asking Michael. It was three years ago, the people of Michigan enacted a new constitutional amendment that removed responsibility for the redistricting process from the state legislature to a new citizen’s commission.

As I’m sure your listeners know, the redistricting process is the process every 10 years by which our congressional and state legislative districts and their boundaries are reconfigured. It’s an extraordinarily important process in terms of setting forth the building blocks for our system of Democratic and representative government.

Right now, the commission is engaged in deciding how its procedures are going to be established and how it’s going to operate. And the critical issue involves a debate between two fine educational institutions, but institutions with very different educational missions.

Whereas Hillsdale proposes instead that the commission continue to rely upon what has always been before understood as communities of interest. Namely, geographical communities, counties, cities, townships, and villages.

So that’s the debate that’s taking place right now. How do we understand the building blocks of the system of redistricting in Michigan? Do we understand it to be a means of giving priority to favored and preferred interest groups and identity groups?

Or do we understand it as it’s more traditionally been understood to mean actual communities, counties, cities, and so forth?

Leahy: Let me just give you a quick reaction to the University of Michigan proposal. I personally think it’s insane. And I’ll tell you why.

Markman: (Chuckles) I was saying that’s a very straightforward reaction. I appreciate it.

Leahy: Well, you know, the criticism we’ll use this pronunciation of gerrymandering, is instead of having districts that are basically the same shape and include defined municipalities that have a common economic trade zone, shall we say, they sometimes look like meandering snakes, and they’re designed by state legislatures to put all the Republicans in one district so that it’s a safe district for Republicans.

And then draw the state’s congressional and legislative district so that one party, the party power gets more districts and more representation. I’m telling you what. If the Michigan proposal, which is insane, as I’ve said, is implemented, they will go in and the map of every district will look like a crazy snake because they’ll go out and they’ll go in and they’ll pick this interest group.

And they’ll try to group all these interest groups together. It will violate the basic principle of organizing these districts sort of around economic communities of interests. Economic communities and areas that have special trade zones and communities that have a distinct personality. What are your thoughts on that? Do I have that right?

Markman: I think you put your finger on the pulse of the problem. When you have districts based as they have always hitherto have been based on geography it’s very easy to have regularly design districts, non-gerrymandered districts.

And this is, of course, one of the principal purposes of this reform the people voted for several years ago. When on the other hand, these communities of interest are not based upon geography.

They’re not based upon real communities. They’re based upon interest groups and so-called affinity groups, then you’re exactly right. You do have to snake around, and you do have to engage in a much more creative exercise in order to put together individuals who are not necessarily geographically close to each other.

You have to be very exotic in the kinds of irregular and squiggly districts that you inevitably put together. So there you’ve got one of the principal purposes of this reform undermined. You have the same thing undermined in terms of the people’s interest I believe in getting rid of an overly politicized process.

You just moved the politicization issue from Republicans versus Democrats to which of these interest groups are going to be favored and disfavored. It’s a zero-sum game as you know, when you benefit one group, you necessarily prejudice another group.

And this process is going to be an extremely politicized process, no less than the present process in Michigan. So, again, I think you’ve defeated another purpose of what the people thought they were getting at by this reform.

Leahy: I think it will be worse. I think it will be even more political. You’ll have all these special interest groups lobbying, hiring attorneys, and doing statistical analysis. You’re a judge, if they adopt this insane University of Michigan approach won’t there be court challenges to it?

Markman: Well, there may well be court challenges. I think the amendment is written insufficiently in broad terminology, overly broad terminology, in my view, for a constitutional provision such that the commission could probably adopt either the University of Michigan or the Hillsdale point of view.

It’s written in a very broad language. And, in fact, we haven’t even spoken about the interest of the people in ridding the system of partisanship by the identity focus of the U of M understanding.

We also run the risk that in the guise of racial, ethnic, and religious considerations which are explicitly set forth by the University of Michigan, we’re basically we’re going to have partisan considerations, although of a more camouflaged sort.

Leahy: Yes. To me, this codifies the Balkanization of America.

Markman: Absolutely. Absolutely. You’re right about that. It is a Balkanization. And I don’t know why we would be introducing for the first time ever in the history of the state of Michigan, explicit consideration of these kinds of polarizing identity considerations.

Leahy: Justice Stephen Markman, former Chief Justice of the Supreme Court of Michigan, currently a Professor of constitutional law at Hillsdale College. Justice Markman, I’m going to suggest something for your consideration.

You may not know this, but for five years we have been hosting here in Tennessee, the National Constitution Bee. And it’s based upon a book that I co-authored. I’m not a judge. I don’t play one on the radio.

But it’s a book called The Guide to the Constitution and Bill of Rights for Secondary School Students. And this will be our fifth year. Kids can earn educational scholarships. 10,000 bucks to the winner.

Markman: Well, that’s kind of you to mention that. I’d be honored to participate. That’s a wonderful exercise and civic education. And particularly in these days when there are so many contrary ideas of education that are being communicated. I think that’s a wonderful exercise. I’d be honored to participate if that was something you were interested in.

Leahy: Well, we are and we’ll talk off-air about the details of that. It’s October 23 of this coming year. It’s really a great event. And we would be honored to have you as one of our judges. Justice Stephen Markman, thanks so much for joining us this morning.

Markman: Thank you again. And thanks for allowing me to focus some attention on this issue. It’s important to the state and I think other states as well because a lot of states are looking to the Michigan experience.

Leahy: Thanks so very much.