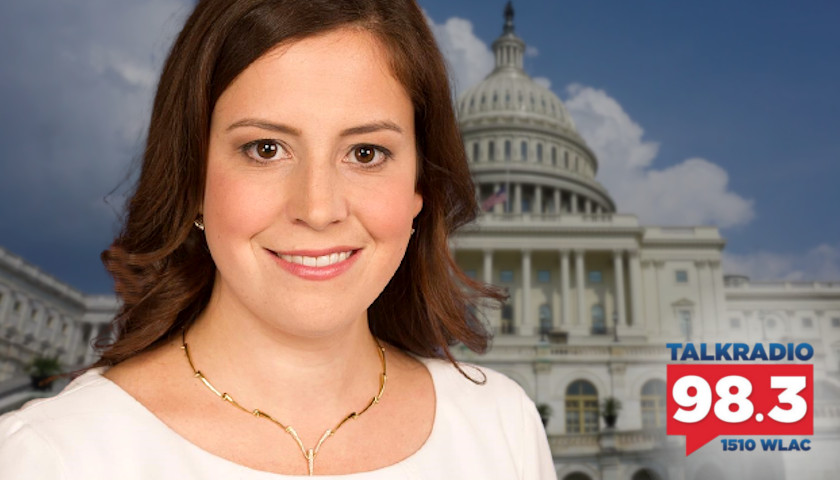 Live from Music Row Tuesday morning on The Tennessee Star Report with Michael Patrick Leahy – broadcast on Nashville’s Talk Radio 98.3 and 1510 WLAC weekdays from 5:00 a.m. to 8:00 a.m. –  host Leahy welcomed all-star panelist Clint Brewer to the studio to discuss the replacement of Liz Cheney and the mechanics of a Republican Party destiny.

Leahy: And that is Elise Stefanik who is the Congresswoman representing the congressional district in far Northern New York, where I used to live as a kid. And now last week, the big news, the political news in Washington, they threw Liz Cheney out of the conference chair position.

The number three position in the House of Representatives and replaced her with Elise Stefanik. Now, I think from a messaging point of view, Stefanik is absolutely on point. And Cheney was absolutely off point. What does this mean for the Republican Party’s future, Clint?

Brewer: Well, I mean, it’s a gamble, right? You could say that about anything in politics. But for this moment in time right now, I think she’s more on message for that House caucus. And I think the move was made because the House members who always have to seek reelection every two years, I think they’re looking to talk more about Democrats going into the midterms than they are a person in their own caucus. It had to do more fundraising in taking the House back than it did anybody’s ideology.

Leahy: Liz Cheney is the daughter of former Vice President Dick Cheney under George W. Bush. She kind of got handed that seat in Wyoming. She’s not really from Wyoming.

Brewer: I think a lot of people get handed their seats in politics. (Laughs)

Leahy: We can’t criticize her too much about that. What was her thinking to go so far in attacking President Trump, and do we counter to the leadership, why did she think that was a good idea that would have a good outcome for her?

Brewer: I’m not sure she cared. I don’t think she did it because she thought it was politically savvy or a good idea. I think she did because it was her conviction. I think she believes it, and it’s her honest viewpoint. I know that’s an outlier in politics to actually share your honest viewpoint, but I think she’s just being honest with people about what she thought because it certainly didn’t help her any. So she wasn’t doing some desire to get ahead politically. I think she’s just telling what she felt like to be the truth.

Leahy: I think her duty, though, to me, if you’re going to be the number three person in the House, you should follow the party line. I think she probably should have resigned and then criticized Trump. But then she wouldn’t have got the visibility.

Brewer: That’s the gamble. So you see Cheney on one end of it, you see Stefanik and McCarthy on the other end of it. The gamble is you’re going to double down on your position. And there’s a fight for the party right now and which way it’s going to break. The House is a what have you done for me lately environment. They got to run.

Leahy: They’re running all the time.

Brewer: They are always running. They never start running.

Leahy: My hats off to all of the Republican members of the House of Representatives serving now because it’s a very frustrating job because it’s all being run dictatorially by Nancy Pelosi. They can’t get anything accomplished.

The only thing they can really do is to try to help in a year and a half, turn the House over and get Republicans in control. I think it’s a tough job. A frustrating job.

Brewer: Look, it’s a tough job if you’re in the majority. I mean, you’re always running. I think the standard stat that’s out there is in order to get re-elected to the House, you have to raise about $10,000 a day.

Leahy: That is a miserable existence.

Brewer: Yes it is.

Brewer: But, I mean, look, to your point about the party, the party right now is fractured. It’s trying to decide what the long-term prospects of the Donald Trump worldview are. And I think there are some people in the party, like Cheney, who disagree with it vehemently.

I think that every day that passes that former President Trump’s out of power and I think that worldview probably has a little less impact.

Leahy: I disagree. I think it’s gotten even more. I look at the polls in terms of Republicans and his support is as high as it’s ever been. Number one. Number two. Did you notice this? He’s going to start doing his rallies again.

Brewer: I did. And it’s going to be interesting to see how they go. I think early on, they’ll go really well, I just don’t believe it’s sustainable. I mean, you saw Reverend Franklin Graham come out and say, I don’t know if he’s going to be well enough health-wise and have the energy and the vigor needed to run again.

Leahy: Really? I missed that part of it. I’ve not heard that there are any health problems.

Brewer: And look at what everybody says about Biden. I mean, it’s not a dissimilar situation.

Leahy: But they are just so different in terms of energy levels, don’t you think?

Brewer: In a gentleman of that age, a couple of years can make a big difference.

Brewer: From 74 on every year, you’re looking for diminished capacity. We’re witnessing it with Joe Biden. And I think the party has to decide if that’s really the direction it wants to go. I mean, you’ve got a lot of people stepping up.

We talked about it in the studio during the Georgia run-offs. You had a host of characters headed down there. (Leahy laughs)

Leahy: A host of characters. I like that. The usual suspects.

Brewer: The usual traditional displaying of plumage and ceremonial dances (Leahy laughs) that go along with sidling up to running for a major political office.

Leahy: She kind of self-destructed back there a little bit. Didn’t she?

Brewer: I think she’s probably more attuned to Liz Cheney than she is to Donald Trump in terms of her values. I think Stefanik and McCarthy. I mean, look at McCarthy before Trump, he was just kind of a templated neocon.

Brewer: He was not a Trump populist, but he got on the bandwagon, and that’s what it is. It’s a bandwagon and bandwagons run out of steam and they run out of gas. They stop eventually.

Leahy: Now you talked about governors and we have some governors coming to Nashville in a couple of weeks. The Republican Governors Association.

Leahy: That we’re trying to get a ticket to for interviews. The leadership now in the Republican Party of action is at the level of governors. And, of course, the number one guy people think of Ron DeSantis in Florida.

Brewer: Well, I agree. And I think DeSantis is an interesting position. A lot of the knocks on Republicans have been how we’ve comported ourselves during the pandemic, and Florida has done really well. He’s made all the right moves. He managed it very well at the state level.

Leahy: By the way, the legacy media in Florida hate his guts.

Leahy: Totally hate him. That’s one of the reasons why we started as our seventh title at the Star News Network. We started The Florida Capital Star and getting great stories out of there. A big story today, Jeb “low energy” Bush former governor there, that guy. He has come out and criticized Governor DeSantis for his support of online gambling for the Seminole Nation.

That’s become a bill down there, sports betting. And Jeb Bush has come out vigorously opposing that. I don’t think that helps. I don’t know why Jeb is doing that. But I think it’s popular, frankly, down there. DeSantis is doing a lot of popular things.

Brewer: Well, it’s popular everywhere. Human beings like to gamble. I think that’s something you can say pretty affirmatively no matter where you are, people find a way to gamble. Is it the best thing for society? I don’t know. But not entirely. But is it something we really have a right to tell people no on? Not really. Can the government regulate it and tax it so it’s not completely destructive. I mean, there’s a role there.

Leahy: And it’s online all kinds of gambling, not just sports doing down there. Well, it’s very interesting. We’re going to try to get Governor DeSantis in studio here in the next couple of weeks. Maybe Kristi Noem and a few others.