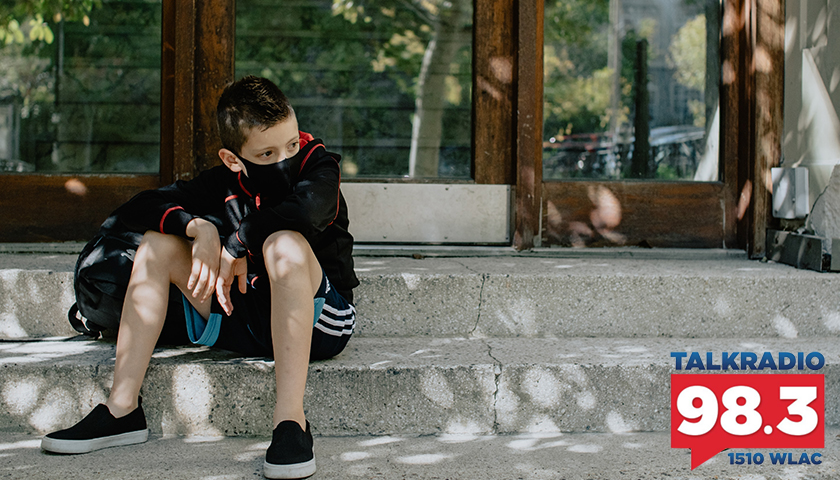 Live from Music Row Tuesday morning on The Tennessee Star Report with Michael Patrick Leahy – broadcast on Nashville’s Talk Radio 98.3 and 1510 WLAC weekdays from 5:00 a.m. to 8:00 a.m. –  host Leahy welcomed Maury County Mayor Andy Ogles in the studio to weigh in on the uncertainty of the mature minor doctrine by the Tennessee Health Department and the right of parental consent with administering the COVID vaccine to minor children.

You can see it. It’s like a Big Mac truck coming down the highway right at you. That’s what I see. I think you are involved in a little bit of pushback. The Freedom Matters Tour is coming to Tellico Village tomorrow night. Tell us about that.

Ogles: Yes. We launched The Freedom Matters Tour. Tennessee Stands is helping coordinate it. You can go to Freedommatterstour.com. You can see our dates.

Leahy: And it’s Freedommatterstour.com. And Tennessee Stands, this is Gary Humble’s group.

Ogles: That’s right. Gary is doing a great job. A lot of the lawsuits that have been filed against Williamson County, Davidson County, against the governor on freedom and liberty as it pertains to COVID, his group, either directly or indirectly, has been involved with.

And so really kind of tip of the spear as far as trying to get this adjudicated, through court. And one of the things they’ve been fighting is the whole issue of standing and the AG dodging the question. But oddly enough, there was actually legislation passed by the Tennessee legislature as introduced by Casada.

Ogles: And Harwell was the Speaker at the time, which says, and I’m going to abbreviate here and summarize that any Tennessee citizen has the right to challenge the action of their government in court. So they by default have standing.

Leahy: Standing is that excuse that courts use when they don’t want to deal with a difficult issue. People who are lawyers spend their lives finding out about who has standing and who doesn’t?

And often as a nonlawyer, I’ll look at a case where it looks like, obviously, this plaintiff has standing, and the courts will say, no, you don’t have standing. And I try to figure out, how do they determine that? It defies logic to me sometimes. What’s the prospect of that particular law being passed.

Ogles: So the law is actually already passed.

Leahy: The law is passed and has been signed into law.

Ogles: Correct. This goes back to when Beth Harwell was Speaker and Glen Casada. And I forget who the Senate sponsor was? And forgive me for that. Mike Carter recently passed away of cancer – was co-sponsor.

He was an attorney by trade. The court ruled there was an issue of standing. So they have since appealed, and they’ve gone back to the General Assembly’s actual recordings. They’ve hired a stenographer and created an official transcript.

And my understanding is they have documentation from Glen, Representative Casada himself explaining the intent that would give any citizen to sue the actions of the governor or, say, a County Mayor for doing some of these mandates as it pertains to COVID.

Leahy: We’re going to go back to this so-called mature minor doctrine. What a mess that’s been. Go ahead.

Ogles: It epitomizes government overreach and this idea that suddenly you’re going to have health care professionals and the government talking to your child without your permission, giving them a vaccine – 14-year-olds a vaccine. But when you go back to the original actual facts of the case, it was a unique decision.

Leahy: Here’s what’s interesting about what happened about this. I’m gonna tell you something new. Something new about the mature minor doctrine.

It’s a legal doctrine that was codified in the 1987 Tennessee Supreme Court decision. It was called Caldwell v. Bechtel. It had to do with a 17-year, 7-month-year-old girl.

Ogles: She was almost an adult.

Leahy: Almost an adult who presented herself as an adult to an osteopath, the chiropractor who treated her. And there was some negative consequences. They sued.

And the Tennessee Supreme Court said that although we’re a common law state, in this particular instance, the presumption is there’s a standard in other states called the rule of seven.

In essence, it said, for anybody age 14 to 18, there’s a rebuttable presumption that they are mature, asterisk. But they applied it to that case and they said, well, a 17-year-old and 7-month-old woman/girl who presents herself as an adult, the doctor could expect her to be mature.

It’s very different to apply that legal doctrine – not upstate policy – but legal doctrine to a situation where you’ve got a 14-year-old who is clearly not capable of analyzing the risk associated with taking the COVID-19 vaccine.

How it became ‘state policy,’ interesting, the mature minor doctrine. We did some research on this, Andy. And it did not appear on any Tennessee Department health website until May 21st of this year. How about that?

And Janice Bowling in testimony when the Commissioner of Health appeared, said, look, you’re making a mistake about this doctrine. It’s not a policy of the state. This is simply a legal doctrine to be applied by judges in the case of litigation. Totally different.

Ogles: That’s right. Again, you have a situation where you have a young woman, who’s literally three months away from her 18th birthday, who is seeking medical treatment for excruciating pain.

And again, that’s oversimplifying the facts. Now you’re going to have a state agency going out and hocking a vaccine to 14, 15-year-olds without their parents’ consent.

Leahy: Not just hocking it, administering it.

Leahy: Without parents’ consent. And by the way, last week, Governor Lee made a kind of loosey-goosey statement in which he implied that the state government of Tennessee would not be delivering vaccines to kids age 14 without parental consent. The very next day, the commissioner of health said, yes, we are. Does he know who’s running the show?

Ogles: (Chuckles) I think it’s part of a pattern with this administration. They try to be on both sides of an issue. If they do something, they only do enough so that he can campaign on it, but not enough to actually affect change.

That’s why we still have universities in the state of Tennessee that can allow men to compete as women in college sports. Whereas in Florida, Ron DeSantis said enough was enough.

And so in Tennessee, we haven’t figured out that a dude in a dress is still a dude. (Leahy laughs) So here we are on both sides of an issue.

Ogles: Where there’s a clear definition. If you’re a guy and you’re wearing a dress it’s your business right? But then don’t show up and try to go to the women’s restroom. Don’t try to enroll yourself into women’s sports right? You’re a guy.

Go be a guy. All right? You just happen to be a guy in a dress. That is plain and simple. And now you have this vaccine issue, the mature minor doctrine. And the governor is trying to be on both sides of this issue when clearly this is up to parents and parents alone. The government should not be trying to dictate my child’s health care.

Leahy: But see, what I think happened here is that the left-wing bureaucrats in the Department of Health, because they’re looking at this 38 percent vaccine adoption rate in Tennessee.

But they have used this idea. They found this 1987 decision, they’ve misinterpreted it, and they’ve cast it as a state policy. And they’re using that as an excuse to administer the vaccine to 14-year-olds without parental consent.

Ogles: What everyone needs to understand is that the Tennessee Department of Health was created by the General Assembly. It’s not a constitutional department, and they work at the will of the people.

Leahy: And when you say that like the attorney general, that’s a constitutional office.

Leahy: But the Tennessee Department of Health is not a constitutional office.

Ogles: These folks have gone off script and I would say today they should all be fired, period. But this governor doesn’t have the courage to do it.

And the General Assembly should call a special session and protect our children instead of sitting on the sidelines the way they have through most of COVID.

Leahy: Well, they have. And part of it has to do that they were very busy in their first session. But I think it would be a really good idea to have a special session to really figure out what the state policy is.

Is it what the governor says it is or is it what the commissioner of health says? Hmm, inquiring minds want to know.